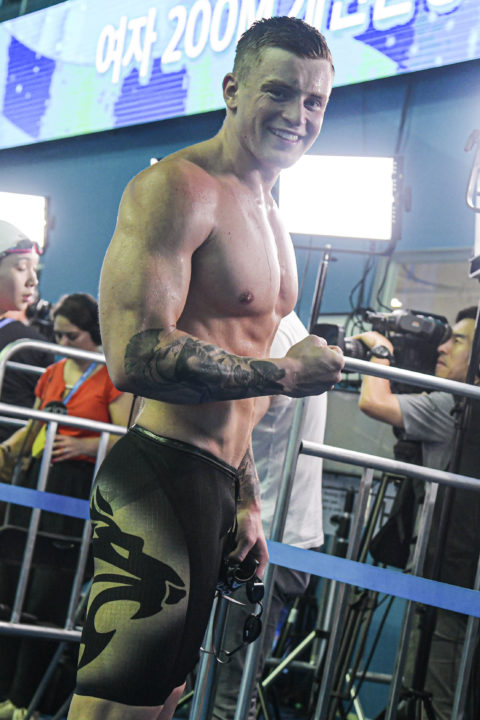 Not giving a second thought to having morning finals was Olympic and World champion Adam Peaty, with the breaststroking ace throwing down as usual. Archive photo via Gian Mattia D'Alberto - LaPresse

The 2020 McCullagh International Meet gives swimmers a chance to test out having finals in the morning, as the ‘day 1 prelims’ took place last night at Aurora Complex in Bangor. This mimicks the timing set to happen at this summer’s Olympic Games in Tokyo, Japan.

Not giving the timing a second thought was Olympic and World champion Adam Peaty, with the 25-year-old first busting out a night swim of 58.90 before lowering it further this morning to a swift 58.78 to take 100m breast gold.

The Loughborough man split 27.42/31.36 to beat a stacked field this AM by over a second, a field which included Commonwealth Games medalists James Wilby, Ross Murdoch, plus two-time Olympian Craig Benson.

Wilby finished under a minute as well tonight, dropping his 1:00.26 prelims swim down to 59.91 for a solid in-season effort. Splits for Peaty’s teammate included 28.08/31.83 to get him on the board with the silver.

As fast as Peaty was this morning, he sits just off the #1 time in the world, which stands at the 58.61 Dutch record holder Arno Kamminga clocked last month at the FINA Champions Series in Shenzen. Belarusian Ilya Shymanovich also ranks slightly above Peaty, holding a season-best of 58.73, albeit from last August at the FINA World Cup stop in Tokyo.

Also situated just ahead of Peaty is young gun Nicolo Martinenghi of Italy, who posted a mark of 58.75 in Riccione last December.

However, these rankings merely set the stage for what’s to come as the months roll on, with the British Championships still sitting 2 months away.

Additional racers in this morning’s finals session included Commonwealth Games champion Aimee Willmott putting up the fastest 400m IM time for the women, stopping the clock in 4:39.63. The 26-year-old Stirling standout will most likely be happy hitting a sub-4:40 this time of year.

Aberdeen’s Miley is the long-time British record holder in this event, owning a lifetime best of 4:31.33 from 2009. Willmott is GBR’s 2nd fastest performer all-time, possessing a PB of 4:33.01 from the 2014 Commonwealth Games.

As for Shanahan, the teen has been as fast as 4:43.36 from the 2019 European Junior Championships, placing her at slot #11 among Britain’s all-time performers. That time also rendered her the bronze medalist last year in Kazan. This effort here checks-in as Shanahan’s 5th fastest time ever.

Also in the water was two-time relay Olympic silver medalist Duncan Scott, with the versatile 22-year-old immediately moving on to this McCullagh International after contesting BUCS last weekend.

Scott dove in the for 100m freestyle, posting a night prelim effort of 49.11 to represent the only heats swimmer to delve under the 50-second mark. He mimicked the feat in this morning’s finals, touching in a winning time of 48.86 to collect the only sub-49 second time of the field.

Ryan secured silver in 49.92, while Bangor native Jack McMillan produced a mark of 49.97 to also land on the podium.

17-year-old Edward Mildred of Northampton represented the youngest finalist of this men’s 100m free by 3 years. But the teen held his own, checking with a very respectable 50.60 to drop .18 from last night’s swim.

Mildred’s 50.60 sits just .13 outside of the 50.47 lifetime best he achieved at the NASA County Championships just last month. Plus, Mildred knew he had the 200m fly just a couple of events later in this morning’s session.

Larne’s Danielle Hill and Stirling’s Kathleen Dawson produced the exact same time of 28.35 to tie for gold in the women’s 50m back, leaving Harriet West to snag the bronze in 28.97.

Hill has been on a record-breaking tear over the past year, a run which included taking the 50m backstroke national standard down to a swift 27.95 at last year’s Irish Summer Championships.

As for Dawson, although the Stirling athlete owns a PB of 27.92, this is a solid indicator that she is back to form after having battled injuries as of late.

Siobhan-Marie O’Connor produced a time of 1:08.15 in the women’s 100m breast, but so did her Loughborough teammate Sarah Vasey to give us our 2nd tie of the night. With both women coming in for gold, McSharry, fresh off the 100m free final just a few events earlier, snagged bronze in 1:08.20.

As noted in our meet preview, we expected this race to be tight and indeed it was. The fact that the aforementioned women, in addition to Molly Renshaw touching in 1:08.25 for 4th, are all pushing each other early in the year is essential if GBR wants to see anyone near the 1:06.34 British Swimming-mandated cut for Olympic qualification.

Entering this meet, no British woman ranked among the top 25 performers this season, which means the nation has some catching up to do in terms of confidence-boosting for April.  The 2019 British Championships saw Jocelyn Ulyett take the gold in a time of 1:07.35, while 18-year-old Tatiana Belonogoff reaped silver in 1:07.61.

Belonogoff has since pursued Russian sports citizenship, while Renshaw finished 7th in Gwangju last year in a time of 1:06.96.

During last night’s prelims, O’Connor did put up a time of 1:07.48, however, to establish her 17th this season.

Finally some racing in the meters pool on SwimSwam 🙌🏻

58.7? He must have had a lifting session right before he swam.

Are the live results working for anyone?

Not me. I get an error message: “Forbidden – You don’t have permission to access this resource.”

Its not, I’m in Ireland and have been getting that message for months, probably trying to get people to pay for Meet Mobile membership.

I complained to them about it yesterday and they said it was being looked at and it’s fixed now.

Jeff – It ranks her 17th worldwide this season; I’ve included that now.