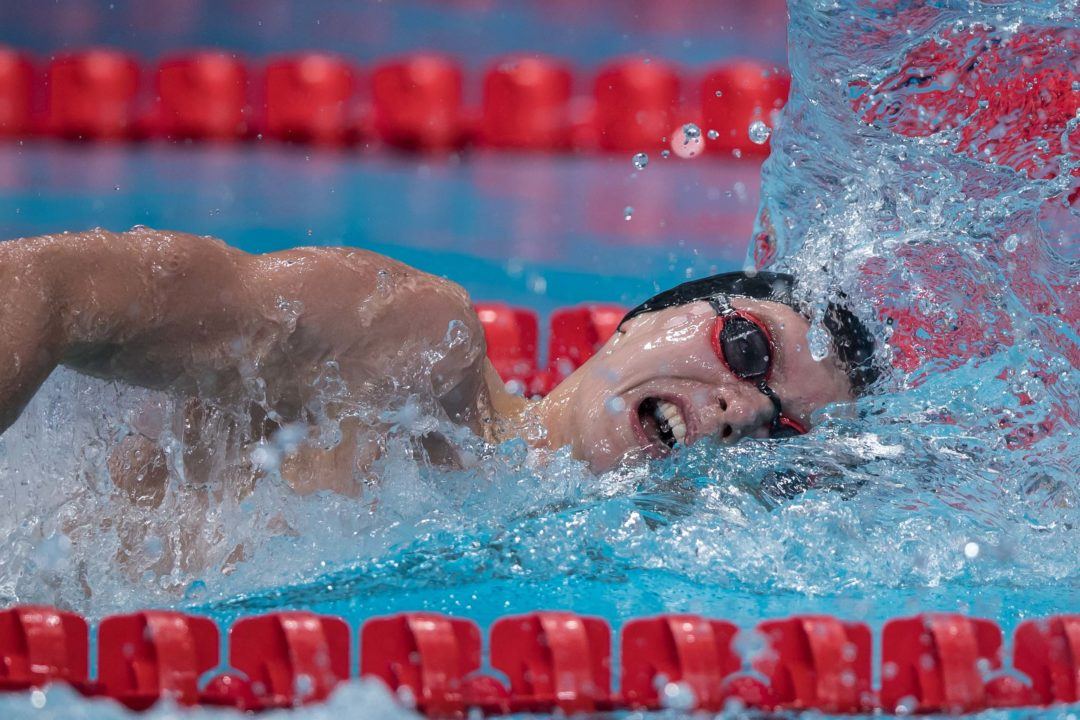 Duncan Scott showed his class in the men's 200m freestyle posting a time of 1:47.32, 3 seconds faster than the rest of the field ahead of tomorrow's final. Archive photo via Mike Lewis/Ola Vista Photography

The first finals session of the meet saw some fast performances in the pool this morning, including Adam Peaty’s 58.78 100m breaststroke time which sits at the world’s #2 this season. We also saw another stellar swim from Duncan Scott in the 100m freestyle (48.86), as well as two dead-heat finishes for Danielle Hill and Kathleen Dawson in the 50m backstroke (28.35), as well as Siobhan-Marie O’Connor and Sarah Vasey in the 100m breaststroke (1:08.15).

Adam Peaty returned to the pool on Friday evening for the second round of heats, mirroring the prelims-in-the-evening, finals-in-the-morning schedule of the upcoming Olympics.

The most anticipated race of the day is the 200 breaststroke, where 100 breaststroke World Record holder Adam Peaty swam his first long course 200 since 2017.

Peaty’s best long course time of 2:08 came at the 2015 British Championships; earlier this season, during the International Swimming League, he swam his best short course time in the 200 of 2:04.63.

which kicked off with a dominant performance from Max Litchfield in the 400IM after he posted a time of 4:19.01. He’s off his own entry time mark of 4:10.94, but goes into tomorrow morning’s final 16 seconds ahead of second place seed Cadan McCarthy of National Centre Limerick.

A change of pace saw us move to the first sprint events of the evening, where Irish Senior record-holder Mona McSharry touched first in 27.07 in the 50m butterfly (record stands at 26.62). She’s followed closely by Charlotte Atkinson (27.25), Harriet West (27.65) and Siobhan-Marie O’Connor (27.68) who were the 4 sub-28 swimmers this evening.

The men in the same event are led by Calum Bain with 24.63. He leads by 0.7 of a second ahead of National Centre Limerick swimmer Cillian Melly (25.30).

Kathleen Dawson made her mark in the women’s 100m backstroke heat, just slipping under the minute-mark by the finest of margins with her time of 59.98. The 23-year-old won the 50m backstroke in a dead-heat alongside Danielle Hill (28.35) this morning. Hill will join Dawson in the A-Final of the 100 tomorrow as 4th seed (1:03.82).

A stacked men’s backstroke field saw some fantastic swims this evening. Luke Greenbank heads up the A-finalists (55.11) while Conor Ferguson of Larne (55.29) and Joe Litchfield (56.04) go in 2nd and 3rd. Rio 2016 Olympian Shane Ryan is also in the mix with what looked like a comfortable 56.10 – his personal best standing at 53.73.

The final individual heats came in the form of the 200m breaststroke, and were Loughborough-dominated with Molly Renshaw taking the women’s top seed in 2:27.92 and teammate James Wilby the men’s in 2:11.98.

Alys Thomas’ 200 free looked very good – Great underwaters, easy long stroke, can’t quite believe she hasn’t had a good crack at freestyle before hitting 29 – She should take that PB apart this year. Not sure what to make of SMOC; Her 27.70 first 50 looked very controlled, but the backhalf of old hasn’t quite clicked yet.