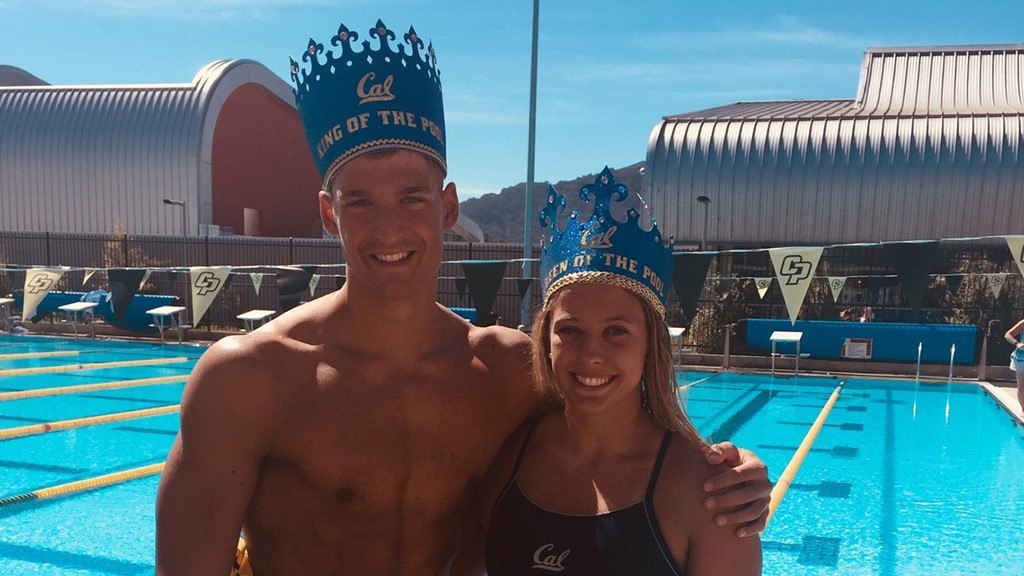 Josa won the crown in his first-ever King of the Pool appearance, while the defending CSCAA National Swimmer of the Year Baker won for the 2nd-straight season.

After a 2 year absence from the annual Cal Poly hosted event, the Cal Golden Bears men returned to make the part-barbecue, part-swim meet event once again whole on Friday in San Luis Obispo.

In the men’s pool, senior Matthew Josa, racing his first King of the Pool after transferring in last year from Queens, walked away with the men’s crown; while Cal junior Kathleen Baker, the defending CSCAA National Swimmer of the Year, took her 2nd-straight women’s title in the meet. Each swimmer raced a 100 fly, 100 back, 100 breast, 100 free, and 100 IM, with the lowest cumulative time taking the title. Most results were unsurprising, but there were a few eyebrow-raising swims to take note of throughout the day.

King of the Pool

The men’s King of the Pool race came down to less than four-tenths of a second all-told, with Cal’s three talented, and versatile, stars racing down to the wire. Matthew Josa, Andrew Seliskar, and Zheng Quah are three of the most versatile swimmers in the NCAA, especially over 100 yards, and it was ultimately Josa, without any significant weakness, who came away with the win.

Josa didn’t have the fastest time in any single event – but he was very close in two (within a tenth of Seliskar in the 100 free and 100 IM). While Seliskar, who has been good at everything in his career but has really pushed development in breaststroke in college, took 1.3 seconds from Josa in the 100 breaststroke (56.20-57.50), Josa got Seliskar in both the 100 fly (47.68) and 100 back (49.47). If this race were swum in a 200 yard format, Seliskar would probably be the champion comfortably.

As alluded to, while the three-headed battle was where the fun was at, there were a few other swims to take note of. Cal junior Mike Thomas won the 100 backstroke in 48.74. That’s almost a full second faster than the 49.6 that he opened his sophomore season with a year ago.

Cal Poly’s highlight of the day was a 2nd-place finish in the 100 breaststroke from redshirt sophomore Brian Whittington. That’s within two-tenths of a second of his career best. He ranks 2nd on Cal Poly’s all-time list in this event, but sat out last season.

Queen of the Pool

Olympic champion and triple Worlds medalist Kathleen Baker opened her junior year with a second-consecutive Queen of the Pool title, and unlike the competitive men’s title, Baker made a statement with her early result – winning by five-and-a-half seconds over her next-closest competitor.

The highlight for Baker was a 53.90 in the 100 backstroke, an event in which she’s the defending NCAA Champion. That’s the 3rd-best time in the country this season (behind Florida’s Emma Ball and Michigan’s Taylor Garcia).

Baker’s total finishing time was 4 seconds better than her 2016 winning time. She had the fastest time in every event except the 100 free – which was won by Abbey Weitzeil in 50.61.

The next-closest finisher to Baker was freshman Sarah Darcel, a Canadian IM specialist who has had little trouble adapting to the yards course. She finished in 4:45.17. That’s the fastest time by a freshman in this event since Celina Li and Missy Franklin went toe-to-toe as rookies in 2013, with Li eventually edging past Franklin 4:43.10-4:43.22.

Abbey Weitzeil and Amy Bilquist took 3rd and 4th overall, each swimming slower than they ddid at last year’s edition of this meet.

Cal Poly’s top finisher in the pentathlon was a freshman: Sascha Keir. She finished in a combined 4:04.15, including a 58.53 in the 100 backstroke.

Meanwhile, Joe Schooling swims a 46.29 at the Orange-White meet in the 100 back…

freshmen ali harrison had the fastest time in the breast, baker was second; and noemie thomas won the 100 fly. baker only won the 100 back and im

Josa and Baker both from SwimMac Carolina. Just an interesting point of note.

And didn’t Josa go to Queens University? And why is the photo at Cal Poly. Very trippy!

He swam and dominated d 2. He stayed there for Dave Mash. Then he transferred to cal and is on their top swimmers