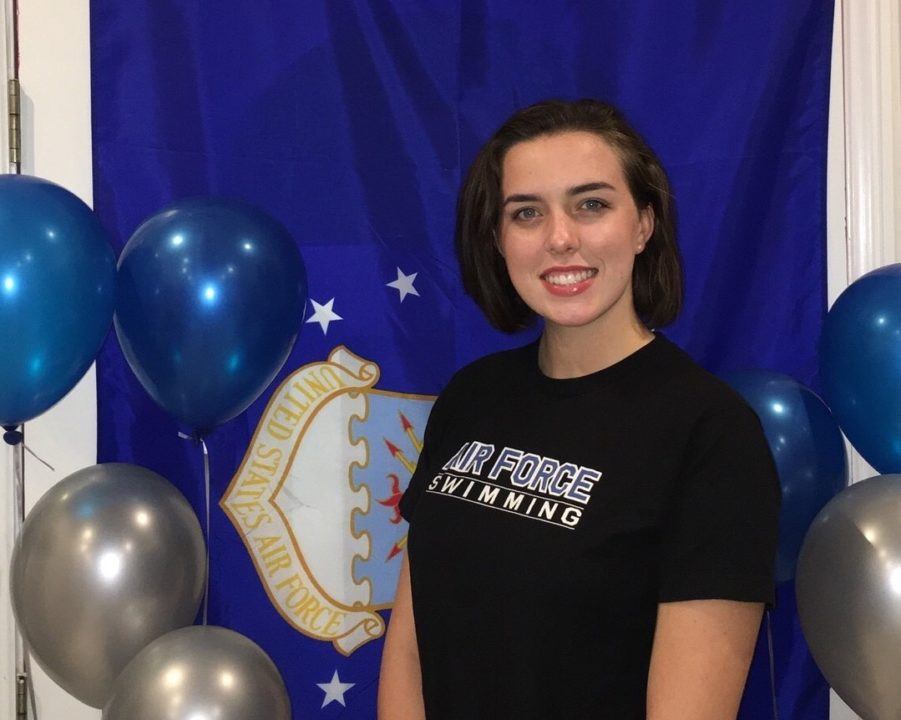 Corinne DeSpain of Haas Hall Academy and the Razorback Aquatic Club Aquahawgs has made a verbal commitment to the U.S. Air Force Academy. Current photo via Corinne DeSpain

Corinne DeSpain, a senior at Haas Hall Academy in Fayetteville, Arkansas who also swims on the Razorback Aquatic Club Aquahawgs, has made a verbal commitment to the United States Air Force Academy. With parents in the Air Force a a sister, Jade DeSpain, at the United States Naval Academy, DeSpain is carrying on the family tradition of serving the country through military service.

“I feel the call to take my place and stand shoulder to shoulder with those who share the same ethos. I understand the sacrifices involved, and I am making my decision to join other cadets at the U.S. Air Force Academy in serving my country. Service in the United States Air Force became the logical choice for me when I began to consider the different service academies. Growing up, I intently listened to stories my mother told of her time in the Air Force. When I was six, my family moved to Beijing, China when my father was assigned to the U.S. Embassy, and there I learned about the military attache program and the crucial job of the Air Force attache serving as a liaison to the Chinese People’s Liberation Army Air Force. I know that I will receive not only a world-class academic education but also leadership and personal development skills that contribute to the outstanding reputation of its graduates. With this foundation, combined with my work ethic, I will be able to excel in any area where the Air Force assigns me to serve. After graduation, I intend to build a career that reflects positively on the Air Force Academy and take opportunities to serve as a link in the chain for others. I am so excited to swim for USAFA and be a part of the cadet wing. Go Falcons!”

DeSpain won the 100 breast at the 2016-2017 Arkansas State Swim 5A-1A Championship. She placed third in the 500 free, swam breast on the Haas Hall winning 200 medley relay, and contributed the fastest leg to the second-place 400 free relay. She has been a state record-holder when the Haas Hall medley relay since freshman year; the quartet lowered their own record during her sophomore season.

First of all, thank you to each of my past, present, and future coaches. I'm thrilled to announce my verbal commitment to swim for the United States Air Force Academy. Integrity First. Service Before Self. Excellence in All We Do. #AimHigh #GoFalcons