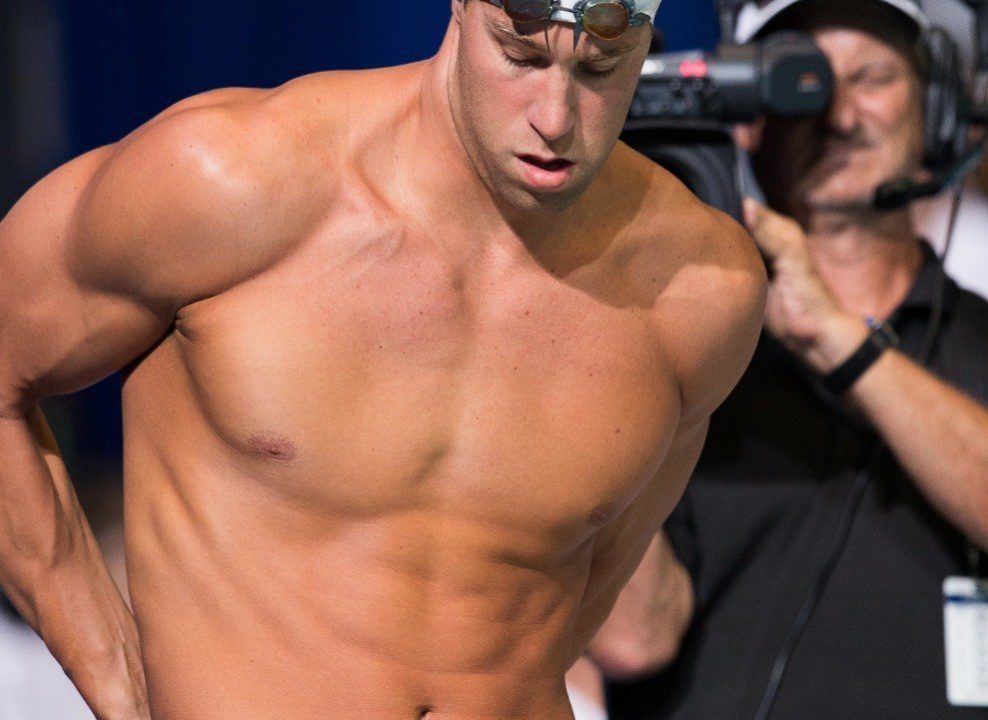 After a big breakout freshman year at UVA and a successful summer, Gretchen Walsh is positioned to wow college swimming fans…

With “Duel In The Pool” mere days away, Shaine Casas has another opportunity to sharpen his knife in international competition.

Heilman hit his taper at U.S. International Team Trials, qualifying for the Jr Pan Pacs in three events, which will be his national team trip.

Matt Grevers is the fastest man in 100 backstroke history, though he doesn’t own the World Record. The 52.08 he put down at the 2012 US Olympic Trials was unaided by one of the sausage suits, the rocket science tech swimsuits that downed endless world records back in 2009. Aaron Peirsol, now retired, is still considered the greatest overall backstroker in history, and he does own the tech suit-aided 51.94 100 backstroke world record. Grevers, if he continues to perform over the next three years, “could” unseat Peirsol as the greatest backstroker ever (but I’ll leave that conclusion to the swimswam commenters who often add great depth on insight on these topics).

At the 2013 FINA World Championships, Grevers will swim the 4×100 freestyle relay, 100 backstroke and potentially the 4×100 medley relay. Grevers has tough competition from home, the U.S., as David Plummer outtouched him at the US World Championship Trials in the 100 backstroke. Grevers and Plummer are old rivals, having competed against each other for over a decade.

And Mr Peirsol is a so cool guy. 😎

Roland Matthes, the greatest male backstroker of all time:

1. Between April 1967 and August 1974 he won ALL backstroke competitions he entered. Longer than any other backstroker ever.

5. Held WRs in both 100/200 continuously for 10 years, far longer than any other backstroker, including Peirsol.

What more can we say?

You are an encyclopedia!
I’m not a crazy fan of comparisons between swimmers over a so long period. Each period has had its champions. I didn’t even know Mr Matthes. Great accomplishments. But I stay with Mr Peirsol. He’s one of my swimming idols. And the competition is so hard today in a global world. What he has done during the last decade is very impressive. And he’s a so cool guy. 8)

What can we say more?

And had he not accidently missed finals in 2009 at champs, that record would be closer to 51.5!

And yet, Peirsol was beaten by Lochte, a non-backstroker TWICE, in 2007 worlds and 2008 Olympics.

During his reign, Roland Matthes was never beaten by a backstroker specialist, let alone a non-backstroker

The only blemish on Rolland Matthews career if you can call it a blemish is that for a very short time, like 2 weeks he didn’t have the 200 Back World Record. Gary Hall Sr. broke the WR by .08 at the 1969 AAU Nationals in Louisville but Rolland got it back 2 weeks later by .02 and held it until the next year when Mike Stamm broke by .02 at the 1970 AAU Nationals in LA, but then 3 weeks later he got it back and broke the record that Stamm set by .05 and after that he held it until John Naber broke it at the 1976 Olympic Trials.

Woww… you know so much detail.. this is new to me.
Thanks for this!

Grevers could go down as the fastest 100 backer ever and first LeBron sized dude to swim at such a high level, but the reign of dominance has to last till at least after rio, and until he adds the 200(which at his age is highly unlikely) he isn’t the complete backstroke lenny and aaron were. The relay medals in freestyle make him unique among backstrokers but the 200 is needed to be the greatest. And comparing Persol and Bienderman is crazy! Persol won before everyone had suits and after everyone had suits, he wasn’t a flash in the pan like you know who. Thorpe is the greatest middle distance freestyler hands down.

I agree with you that comparing Biedermann and Peirsol is crazy, and yet TEA above thinks that the title “the greatest ever” is determined by the raw judge of “time”.

Also, For your information,
Roland Matthes was also part of East German’s 4×100 freestyle relay who won bronze in Munich as well as freestyle relays medals in euro champs and worlds.

I forgot to add,

How about both Peirsol, Matthes, etc. were both great backstrokers for their time? It’s very hard to compare swimmers for the 70s, 80s, or whatever to their contemporary counterparts.

That I can agree to a certain extent.

However, we do love to compare great swimmers from different era, and the only way to compare is their achievements. It’s the same in other sports: Bolt is the greatest sprinter not because he holds current WR, but because he won olympics double double, worlds golds, broke several WRs. Federer is the tennis GOAT because of his slams, his #1 weeks, etc, and Laver comes close second although from 60s because of his calendar year grand slams, # of titles, etc.

Some here contend that the greats from previous era were lightweight because these people think those greats faced less competition, and that the pure judge is time. But these people… Read more »

Most of the comments here from Americans seem to be agreeing with you. I think you’ll find most contributors here are reasonable and yes that includes the Americans. I don’t think the occasional bias we see from people of any nation should be extrapolated to criticize them all. Also, you obviously don’t agree with Mel but it’s nothing to get wound up over especially when your counter points were not only acknowledged but well received.

Back to the topic at hand, I expect Matt Grevers will swim very well at Worlds.

He didn’t seem 100% rested at Trials. A lot of people have remarked that he isn’t expecting all best times, but sometimes swimmers actually do better when they relax their training a bit. Especially bigger swimmers, older swimmers, and sprinters. One of his worst seasons (2010) he blamed on over-training.

He will be very tough to beat in the 50/100 backstroke this year.

He will have to swim at least 52.50 if he wants to beat Jérémy Stravius.

MEL STEWART, I believe you must remember very well Franck Esposito who was on the olympic podium with you in Barcelona in 1992. Today he’s a club manager in Antibes and coaches Coralie Balmy. But do you remember Bruno Gutzeit? He’s another former French butterfly swimmer of your period. Today he’s a swimming analyst for a French sports channel, sport plus, which broadcasts the Mare Nostrum and the world cup meets. Most of the time his analyses are really pathetic but it’s another story. He has talked about you very briefly when the channel still re-aired the US grand prix until last year. Have you swum against him?

Aaron Peirsol for ever! He’s the greatest.
Come on Mel, Mr Grevers has never won a 200 free gold medal in a big world meet! And his only big title is, for the moment, a 100 back olympic gold medal. If he wins the 100 back in Barcelona and the double in Kazan and in Rio, ok, he will be in the discussion. But it will not happen because Mr Grevers is exclusively a 100 back swimmer.
Now, about this year, in my opinion, the guy to beat in the 100 back is Jérémy Stravius. He’s focused like never before. Matt Grevers isn’t the same as last year. I don’t see Mr Stravius beaten.

Correct me if I’m wrong but I believe he has even never qualified in the 200 back for a big world meet.

The rawest way to judge is time, and Aaron Peirsol has the fastest 100/200 back in history. Some of that is due to the suits, but a lot of it is due to training and technique improvements. Even with the same equipment, top swimmers are just straight up faster swimmers than anyone in the 70s.

Another way to judge would be performance relative to one’s peers. Matthes might have been more dominant, but he had a lot less competition, too. There is way more competition today, and Peirsol didn’t lose a race for 5+ years against a much stronger field.

I suppose another way to judge would be natural talent. i.e. if both had access to the… Read more »

So you judge the “greatest” by time?

Using your logic, this means Biedermann is the greatest middle distance ever.

I meant ‘the greatest middle distance freestyler ever”

I would take the cheat suits into consideration, but Peirsol proved he could swim faster than anyone in the ’00s with the suits or without them.

And the 00’s were the fastest decade of swimming ever. 2010-2020 will probably be an even faster decade, but no one has shown themselves better than Peirsol yet.

But Peirsol’s WRs were made with cheat suits, no different from Biedermann.

So again, using your logic, Biedermann is the greatest middle distance freestyler ever.

so, is Lochte the greatest backstroker ever now?