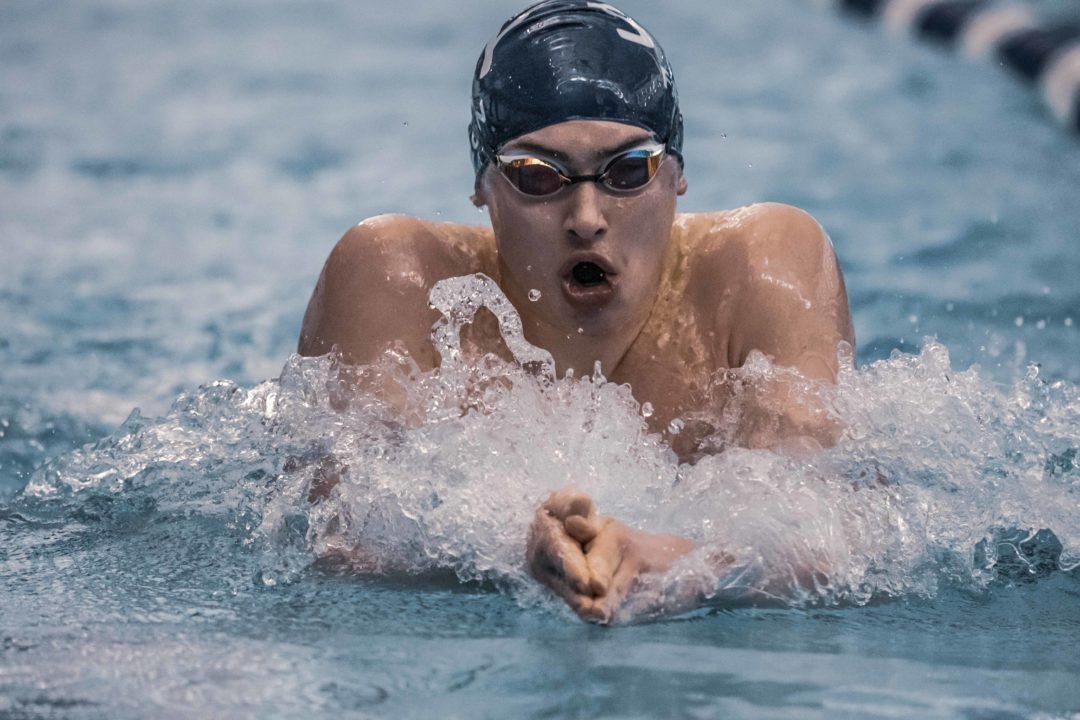 No 200 breaststroke has ever been swum faster in a pool in the state of Florida than Matt Fallon's 2:11.33 on Saturday in Orlando. Archive photo via Mike Lewis/Ola Vista Photography

Erin Gemmell, who is a member of the 2022 US team for Junior Pan Pacs, raced in last year’s Futures Championship meet in Richmond, Virginia.

Correction: a previous version of this article said Fallon’s 200 breast was the fastest in the state of Florida. Cody Miller swam a 2:10 at a Pro Swim Series meet in the same facility 2015, though the LSC doesn’t recognize that swim as an “Open” record.

Note: USA Swimming has split its Olympic Trials meet into two events for 2021 as part of its COVID-19 safety protocols. The Wave I meet, which comes first, is for the slower qualifiers, while a faster set of standards has been put in place to qualify for the Wave II meet. The top 2 finishers in each event at the Wave I meet will qualify to compete at the Wave II meet.

A huge best time from Matthew Fallon in the 200 breaststroke and a number of swimmers creeping closer to Wave II Olympic Trials cuts were the highlights of the 3rd night of racing on Saturday.

Fallon, who is from New Jersey but is in the midst of a second 6-week training camp in Florida, already had a Wave II Olympic Trials cut in the 200 breaststroke entering the meet, but knocked more than 2 seconds off his previous best to win the event in 2:11.33.

That improved upon his previous best of 2:13.36 that was swum at the 2019 US National Championships. He’s now the 12th-ranked American in the event during the Olympic Trials qualifying period, which opened in November of 2018. Fallon is the second-fastest junior swimmer on that list after Josh Matheny. Will Licon leads that field in 2:07.62.

The time also makes Fallon the 7th-best American 18 & under in history:

The winners of both the boys’ and girls’ 50 freestyles also swam best times and crept closer to Olympic Trials Wave II cuts. In the women’s races, Lexie Mulvihill of Tampa Elite Aquatics won in 25.82, beating out Eboni McCarty (26.08) and Cambria Semmen (26.30).

Mulvihill was committed to swim at Auburn, but was recently released from her National Letter of Intent after a coaching change there, and so will announce a new choice for the coming fall.

McCarty of the Madison Swimming Association in Alabama is committed to Georgia and has been 25.79 in the 50 free. For Semmen, a junior committed to Northeastern University in Boston, her third-place finish is a best time by almost half-a-second. Northeastern University has qualified a sprinter, Megan Clark, for the NCAA Championships in recent years, though Semmen will enter with times that rank her among the program’s best already.

In the boys’ 50 free, Jack Alexy of the Somerset Hills YMCA in New Jersey won in a time of 22.90. His prelims swim shaved .11 seconds off his best time from the 2019 National Championships and follows a best time of 19.61 in the 50 yard free done less than a month ago.

Alexy, a Cal commit, will join a Golden Bears team next fall that is graduating the two-time defending 50 free champion Ryan Hoffer.

Other Day 3 Winners and Highlights:

I’m not sure where this stat is from, but the pool record is a 2:10 by Cody Miller.

Hmmm, interesting, because neither LSC recognizes that swim as its Open Record. Will investigate and update.

Matt and Jack are Training with the Saint Petersburg Aquatic Club. They are doing a six week training camp, because Jersey is still extremely restricted. They train at one of America’s most beautiful pools. The North Shore Aquatics Complex, where you can watch the sun rise over the Bay and occasionally see the Space X “Fire in the Sky.” North Shore is the home pool for the entire Margalis and Finke ( Cousin Nic adopted ) Families.

The Jersey Boys are maintaining their Somerset Training program, just expanding it with Long Course and Meter workouts seven days a week. The boys were unshaved an totally unrested for this meet.

The wording threw me off for a second