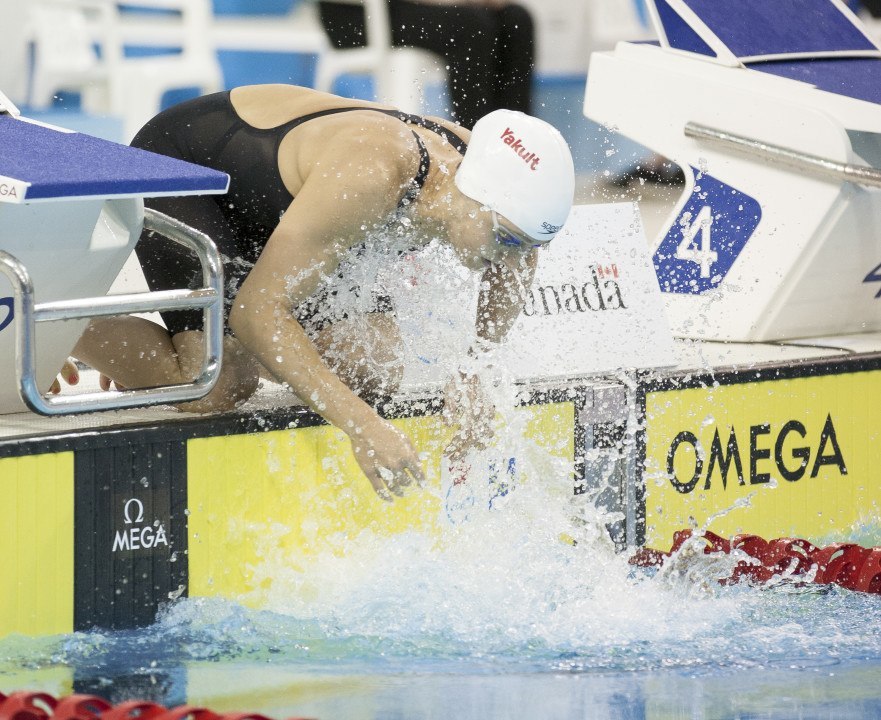 Sandrine Mainville doubled up on day 2 of the U SPORTS Championships, winning both the 50 free and 50 fly. Archive photo via Chris Tanouye

Three meet records fell on day 2 of the U SPORTS Championships, all done by Olympians.

Kylie Masse of Toronto won her third individual gold in the women’s 100 back, lowering her championship record of 56.80 in a time of 56.37. Victoria’s Danielle Hanus won her third silver of the meet in 58.20, and UBC’s Ingrid Wilm took bronze in 58.57.

A few other notable names picking up wins came in the 200 breast, where Manitoba’s Kelsey Wog and Toronto’s Eli Wall triumphed. Wog, the silver medalist in this event at the 2016 SC Worlds, won the women’s event by over three seconds in 2:21.84. Wall, who has qualified for the upcoming Commonwealth Games, cracked 2:09 for the first time in 2:08.77 for the gold.

Masse doesn’t even have the best underwaters!! She’s well on course to break 58 this summer.

Its awkward to watch other swimmers come up ahead of her within the first 15 meters, then she gets so far ahead. Really speaks for the strength of her stroke itself.

Also how much more time she could shave off with some work on her underwaters.