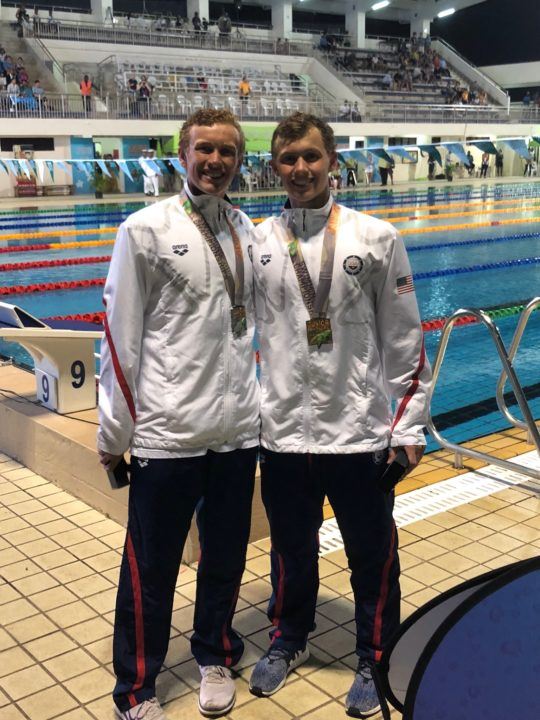 Led off by brothers Carson and Jake Foster (above), the Mason Manta Rays crushed the old 15-18 National Age Group Record in the 800 free relay. Archive photo via Jim Foster

Swimming in the opening relays-only session at the 2018 Winter Junior Championships – West, the boys of the Mason Manta Rays took more than 4 seconds off the old National Age Group Record in the 800 yard free relay. The team’s 6:23.97, which won the race by almost 7 seconds ahead of Carmel, broke the old record (held by Carmel) of 6:28.25 that was done at last year’s Winter Championships – East meet in Knoxville.

This is the same relay that, at last year’s meet, took 2nd in 6:28.95 – the 2nd-fastest time in age group history. The big names are the two leadoffs, brothers Carson and Jake Foster, but they weren’t the difference-makers here, because they in fact combined to split about 7-tenths slower than they were at last year’s meet. Their teammates, Jacob McDonald and Adam Chaney put in huge drops of 1.28 seconds and 4.34 seconds, respectively.

Chaney’s best flat-start 200 free is a 1:39.50. He’s been more proficient to this point of his career in the sprint freestyle and backstroke events than the 200s, but he seems to be developing his endurance a little more, based on the split.

Both Chaney and McDonald are still only 16, meaning that this relay wasn’t eligible to break the 17-18 National Age Group Record. That record still belongs to SwimMAC’s 2013 relay of Matthew Josa, Jack Manchester, Michael Chadwick, and Kyle Darmody, who swam a 6:28.90.

It hasn’t really been that long since 6:23 was an excellent time at NCAAs…

Great swims, but why on earth are they swimming at Juniors? They should have been at winter nats and getting OT cuts- they have outgrown this meet…they should have a rule, if you have senior national cuts in an event, you don’t swim it at junior Nats.

Ledecky was swimming juniors until the summer she made the Olympic team. Her coaches decided it was better for her to dominate and get used to winning until she could do it at the next level.

Heaven forbid they want to swim with their club team.

It could be for many reasons. To keep the group together. They wanted to swim yards and not long course. They wanted to make it a team effort and win a title. They are 18 and under and the coach got to chose which meet was in the best interests of the team and athletes. Good luck to all!