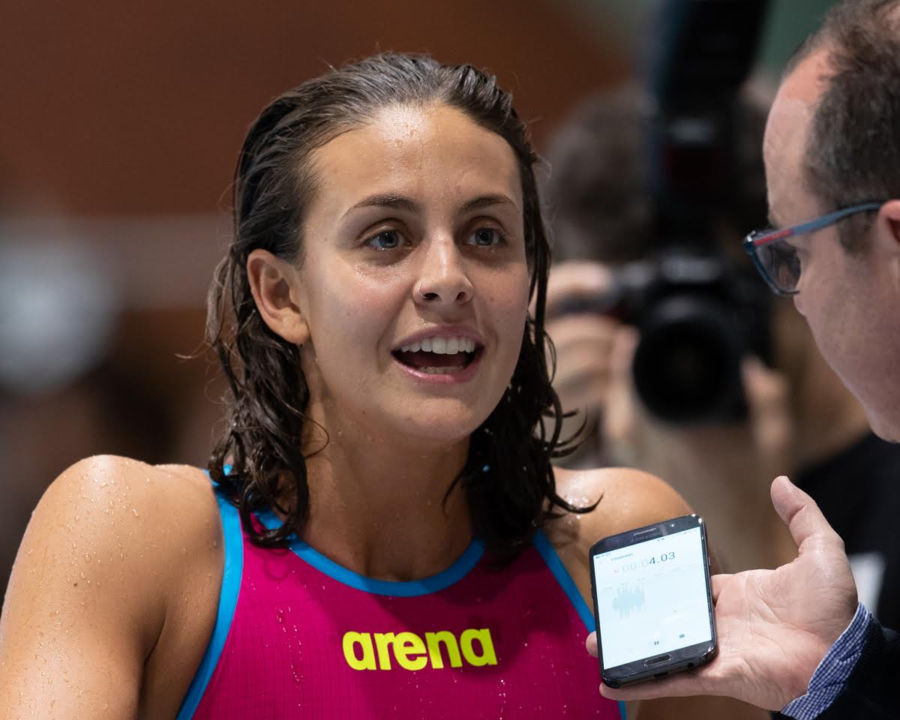 Martina Carraro (above) broke the Italian Record in the women's 200 breaststroke by almost a full second on Sunday at the European Championships. Archive photo via “Rafael/Domeyko Photography”

First, Carraro swam a 2:19.68 in the final of the women’s 200 breaststroke to win bronze, which took almost a second off the old National Record of 2:20.56 done by Francesca Fangio exactly 1 month ago. Carraro went from 6th place at the 150 meter mark to climb into 3rd, and with another stroke she might have had 2nd – missing out by just .02 seconds.

Carraro also holds Italian Records in the 100 breast in short course meters and long course meters. She actually didn’t set that 100 breast record at this meet. In spite of taking a gold medal in the event, her time of 1:04.51 was about four-tenths slower than her National Record in the 100.

This makes a new National Record in the 200 breaststroke, and a 1.3 second improvement from her previous lifetime best of 2:20.96, more surprising. Carrraro has now asserted herself at the top of a very deep and very fast Italian women’s breaststroke group as the Tokyo 2020 Olympic Games approach.

Fangio, the former record holder, was 4th on Sunday in 2:19.97, which also was well under her old record.

In the very next race, the men’s 100 free, Alessandro Miressi took silver in 45.90 and in the process became the first Italian man under 46 seconds in the event. The swim broke his own record of 46.03 that was set in the semi-finals on Saturday.

Miressi also holds the National Record in this event in long course in 47.92.

With these two added, Italy has now broken National records in 8 different events at this meet, with some being broken multiple times.