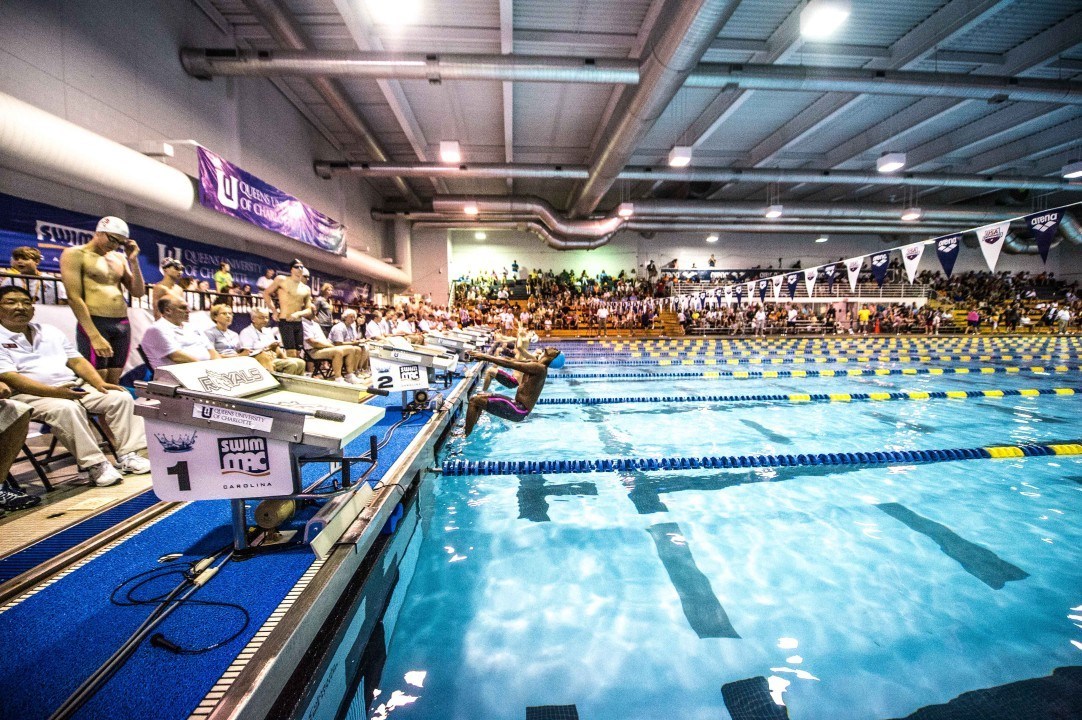 The first day of the 2019 Charlotte Ultra Meet showcased all four 50s as well as the women's 800 and the men's 1500 meter freestyles. Stock photo via Mike Lewis/Ola Vista Photography

The first day of the 2019 Charlotte Ultra Meet (formerly the Charlotte Ultra Swim) showcased the preliminaries of all four 50s, as well as timed finals of the women’s 800 and the men’s 1500 meter freestyles. Though every race except for the 800 and 1500 freestyles will operate as standard prelims and finals (with ‘B’ and ‘C’ finals offered), the 50 freestyle, backstroke, breaststroke, and butterfly will feature prelims, semifinal (top 16), and final (top 8) heats, racing during Thursday, Friday, and Saturday evening sessions, respectively.

To kick off the 50s, NC State rising sophomore Kylee Alons took the top seed in the prelims of the 50 fly in 27.15, narrowly out-touching 17-year-old University of Virginia commit Kate Douglass, who touched 2nd in 27.26. For Alons, this comes as a lifetime best by 14/100ths, while Douglass missed her PR by about 3-tenths. A short 19 minutes later, Alons took the top seed going into the semifinals of the 50 backstroke in 28.45, getting the better of teammate and NCAA and U.S. Nationals finalist Elise Haan, who touched in 28.74. Both Alons and Haan were well off their lifetime bests in the non-Olympic sprint, but still qualified into the top-16 easily as the only women sub-29 seconds.

U.S. National Teamer Jack Conger took the top seed for tomorrow’s semifinals in the men’s 50 fly in 24.20, getting the better of Nathan Lile, who finished in 24.60. NCAA runner-up in the 100 yard butterfly Coleman Stewart was 3rd tonight in 24.73, which is slightly faster than the 24.88 he recorded at the Bloomington stop of the 2019 PSS. Conger finished with another top-seed performance in the 50 freestyle, where he hit the wall in 22.95, way ahead of Skyler Cook-Weeks who finished 2nd in the heats in 23.52, and Lile who came 3rd in 23.54.

16-year-old Maxine Parker leads the pack into the semifinals of the women’s 50 freestyle with a 25.41, while NC State’s Ky-lee Perry and U.S. National Teamer Madison Kennedy sit 2nd and 3rd with times of 25.43 and 25.57, respectively.