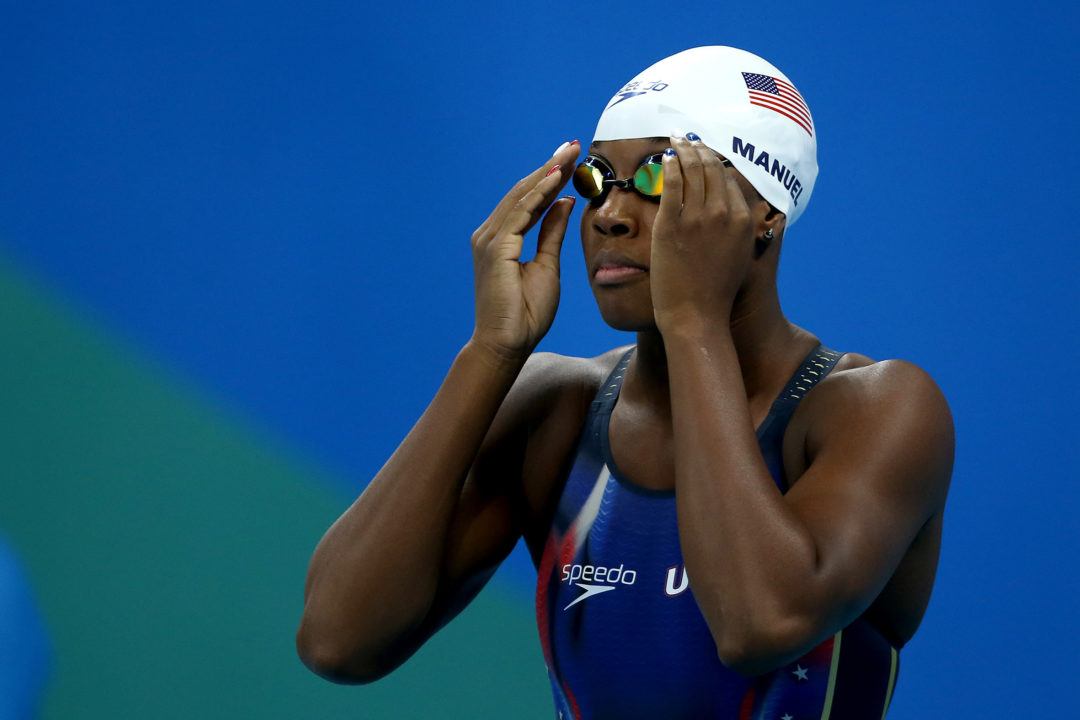 Olympic gold medalist Simone Manuel is taking time to enjoy non-swimming activities since returning from her first games in Rio earlier this month. This past Sunday, August 28, 2016, she was named an honorary captain of the National Football League’s Houston Texans in their pre-season game against the Arizona Cardinals in Houston.

Manuel made waves in Rio as the first Black woman to win an individual gold medal in swimming, setting a new Olympic Record and American Record in the 100m Free along the way (Manuel tied with Canada’s Penny Oleksiak). She also won three additional medals: gold in the 400m medley relay, silver in the 400m free relay, and silver individually in the 50m free.

Manuel is a native of Sugar Land, Texas, and was selected as the Houston Texans’ “Homefield Advantage Captain.” She wore her medals onto the field, waved to fans, met the Texans’ wide receiver DeAndre Hopkins, conducted the pre-game coin toss, and posed for photos with the Texans’ mascot and cheerleaders. After the game, Manuel tweeted, “I had a blast attending my first NFL game. Thank you Texans for having me!”

Two days earlier, on Friday, August 26, 2016, Manuel helped to kick off Arthur Ashe Kids’ Day, an annual event that precedes the U.S. Open tennis championship. Manuel will return to Stanford this fall as a redshirt-sophomore after taking last year off from collegiate competition to train for the Rio games. Stanford’s first day of classes for its undergraduates is not until September 26, which gives Cardinals like Manuel more time for personal appearances.

Manuel is not the only Olympic swimmer to be honored at a recent professional sporting event. Katie Ledecky—Olympic gold medalist, world record holder, and incoming Stanford freshman—threw out the ceremonial first pitch at the Washington Nationals’ baseball game against the Baltimore Orioles. Experts analyzed her pitch and found it was decidedly better than both Justin Beiber’s and President Obama’s pitches. In addition, backstroker David Plummer sounded the Minnesota Vikings’ Gjallarhorn in their first game in their new stadium against the San Diego Chargers.