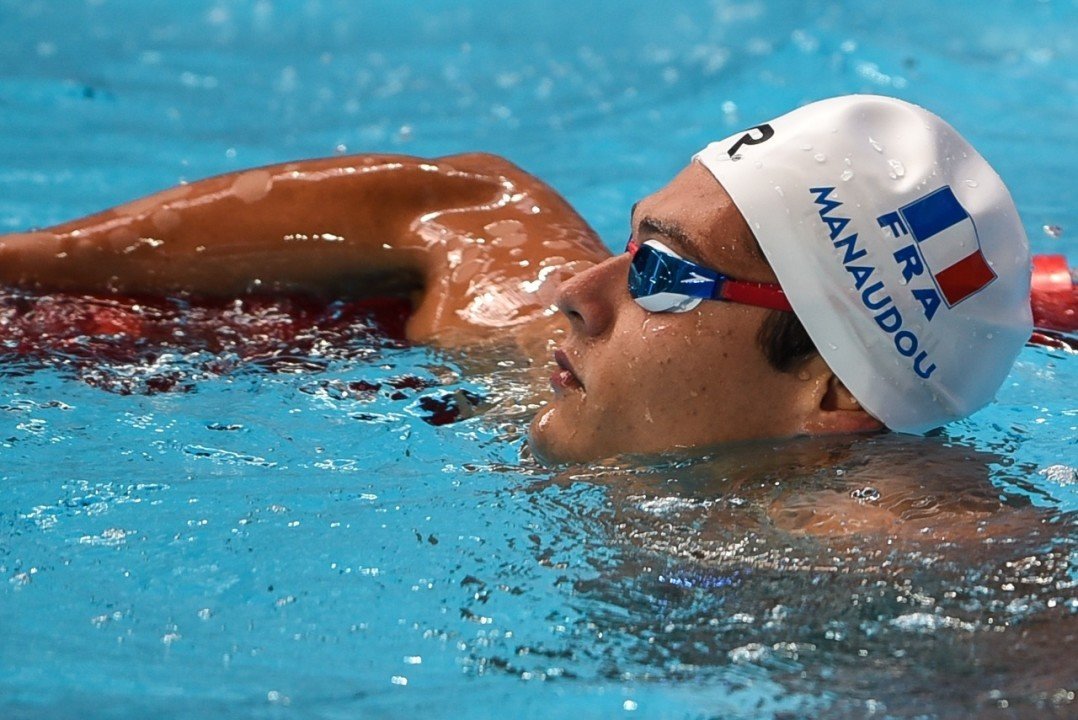 Florent Manaudou led the field in the men's 100 free with a 48.00, his second-best time in the event and the third-fastest performance in the world so far this season. Only his own 47.98 and Cameron McEvoy's 47.56 have been faster. Archive photo via Peter Sukenik/www.petersukenik.com

The 2016 FFN Golden Tour Camille Muffat wrapped up on Sunday evening in Marseille, and the home team had a good showing. That home team is the Cercle des Nageurs de Marseille, the club of the lion share of France’s national men’s team and their coach, Romain Barnier. With three weeks to go until the French Olympic Trials in Montpellier (March 29-April 3), Marseille sprinter Florent Manaudou proved he is ready for the 50/100m free double. After winning the 50 on Saturday with a solid 21.67, the Frenchman took the 100 free in a Golden Tour record time of 48.00. Manaudou was out in 22.49 and back in 25.51, appearing to fade a bit over the last 15 meters. However, as he explained to the press after his race, it’s all according to his plan:

Placing second in the 100 free was Manaudou’s Marseille teammate, Clément Mignon, who clocked a lifetime-best 48.38, only .25 off the French standard for selection to the Rio team (which he will need to achieve in finals at French Trials in order to be selected). Jérémy Stravius of Amiens was third in 49.00, a half-second ahead of Italy’s Marco Orsi. This event will be hotly contested in Montpellier, as Manaudou, Mignon and Stravius, as well as Mehdy Metella, Fabien Gilot, William Meynard and a handful of others, are vying for the opportunity to represent France in Rio in the distance. Of course, this kind of depth is a good thing for France’s 4×100 free relay, but Manaudou’s decision to add the event to his slate crowded the field considerably for Montpellier.

Great Britain’s Fran Halsell hit the wall .30 ahead of Sweden’s Sarah Sjostrom to win the women’s 50 free with a new Golden Tour record of 24.23. That moved Halsell to the number 3 spot in the world so far this season. Sjostrom has been faster (24.17 at Arena PSS in Austin in January) but her 24.53 second-place finish still ranks among the season’s top 5. A total of four women came in under 25 seconds: third and fourth places went to Italy’s Silvia Di Pietro (24.93, which ranks her 20th) and France’s Anna Santamans (24.97). It is worth pointing out that Santamans went 24.71 in December, at the same Christmas long course meet in Nîmes where Manaudou swam his 47.98 100 free. Santamans is tied at sixth in the world so far this year with Etiene Madeiros (BRA) and Madison Kennedy (USA) but it is still .14 off where she needs to be in the final at Montpellier at the end of March in order to be selected to France’s team for Rio.

How do you know all that?

Results from the Olympics, Barcelona, Berlin, Kazan and times they are doing now point to a 3,09. Be smart and bet for France, you will at least get 2to1 before prelims.

In an interview after the race he said he went out too fast and hurt badly coming home. He is in full training,focusing on the 100, and hoping to go split 22,5 and 25,0 at nationals.
If Manadou can open the 4×100 in 47,5, France will be under 3,10 as they will have 5 guys that can go 47 low. Agnel went sub 47 in London, Stravius and Gilot are locks for a 47,0-47,3, If anything happened to those guys they will have Mignon and Metella…
So…who can beat the French? Will Magnussen be able to be at 2012 level to help Mcevoy and Chalmers?

Agnel, where art thou?

Hopefully (from the U.S. perspective) anchoring the 4 X 100 free relay at Rio.

So many times he has been around this time. I think he’s flatlined in it. He’s good enough for a spot in 100 final but he’s not going to medal. I hope he doesn’t sacrifice raw speed in 50 trying to make a better 100. I want something special in Rio maby sub 21.

Anyone know how much rest Manaudou had for this meet?

3 days drop-half-taper-rest while maintaining low end aerobic work, one arm and one leg shaved, and a lucky rabbit’s foot in his cap. 😀

Thanks! I can definitely see a 47.5 once he shaves the other side and puts 2 lucky rabbit’s feet in his cap.