Malyutin Takes 200 Free with 1:46.44 on Day 2 of Russian Swimming Championships 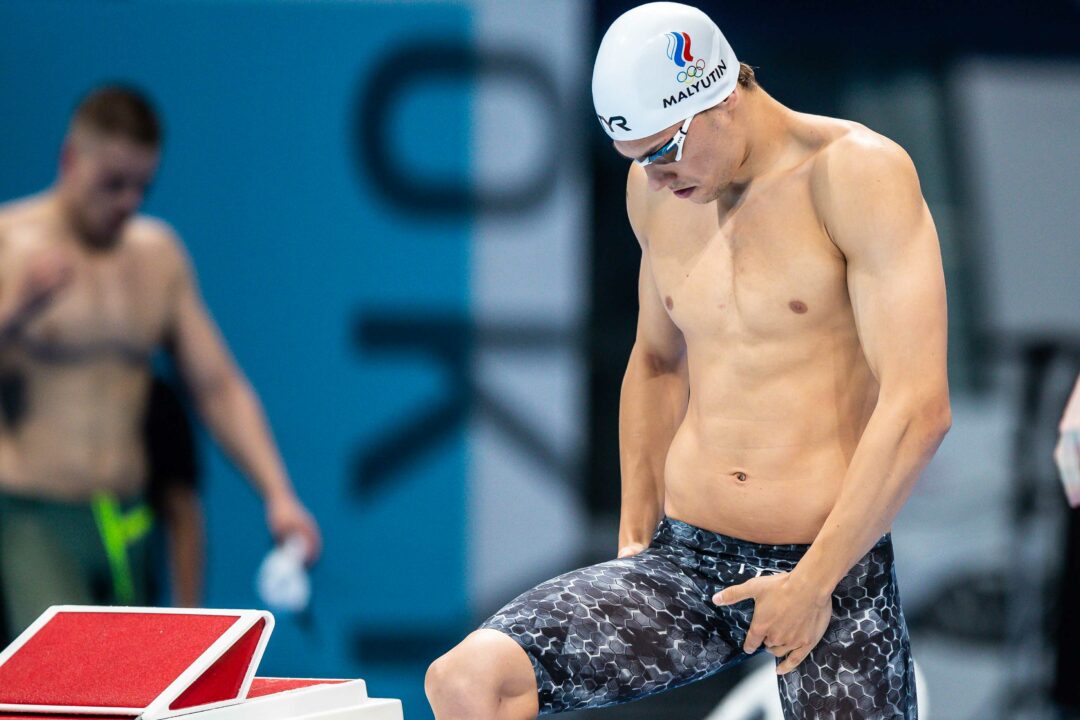 Controlling his race well, Malyutin split 53.17 on the first 100, which had him flipping 4th at the halfway mark. Stock photo via Jack Spitser/Spitser Photography

In the opening event of Monday’s finals session, Olympic Silver medalist Kliment Kolesnikov grabbed victory in the men’s 100 back with a 53.03. It was Nikolay Zuyev who finished 2nd, swimming a 53.19. Evgeny Rylov, the Olympic Gold medalist in the event last summer in Tokyo, touched 3rd with a 53.20. All things considered, this was a somewhat underwhelming final given that Rylov and Kolesnikov were the Gold and Silver medalists in Tokyo, but neither were under 53 seconds tonight.

In the final of the women’s 50 breast, Elena Bogomolova cracked her own Russian Junior Record, taking 1st with a 30.40. Coming in under her previous mark of 30.49, Bogomolova is continuing to inch closer to the Russian National Record of 29.52m held by Yuliya Efimova from 2013.

One of the most hotly contested races of the day was again the men’s 100 breast, where Kirill Prigoda claimed the title with a 59.51. The biggest difference tonight was that Prigoda took the race out in a speedy 27.91 on the first 50, and was able to hold his speed, coming home in 31.60. Anton Chupkov was right behind, swimming a 59.64. Danil Sem’Yaninov was right there as well, clocking a 59.64 for 3rd.

Anna Yegorova won the women’s 800 free, swimming an 8:30.22. The field was notably without distance star Anastasia Kirpichnikova, who holds the Russian Record at 8:18.77.

Ilya Borodin and Max Stupin went head-to-head in the men’s 200 IM, with Borodin getting to the wall first in 1:59.02. Borodin took the lead on backstroke, splitting 30.13 to Stupin’s 30.50. He grew that lead on breast and free, holding his position through the finish. Stupin finished 2nd in 1:59.45.

Why is this even being covered

Technique reminds me of biedermann

The way I’m judging all of them who turn up, I don’t care if it’s not fair! Who thought miss Efimova would ever have the moral high ground!?

Efimova probably just didn’t turn up because there’s no WCs spots on offer.

Meet has been slow so far which I guess isn’t surprising.

Why are you giving these Z’s any coverage

Because it’s a major meet

Why are we giving the Americans any coverage?