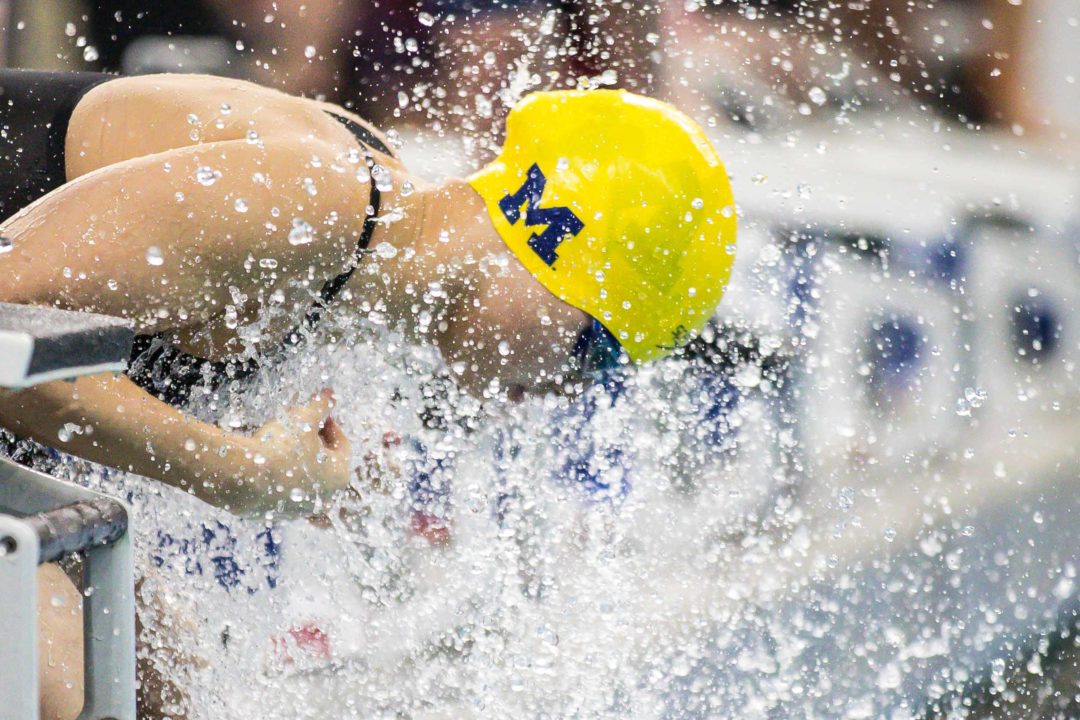 Maggie Macneil, the 4th fastest 100-meter butterflier in the world this season, will race the 100 fly at the 2021 Canadian Olympic Trials Saturday morning. Archive photo via Jack Spitser/Spitser Photography

Canadian Record holder Maggie Macneil will kick off the 2021 Canadian Olympic Trials Saturday with the women’s 100 fly. Macneil, a rising senior at Michigan, won gold in this event at the 2019 World Championships, upsetting World Record holder Sarah Sjostrom of Sweden and coming within .40 of the World Record.

In the men’s 100 fly, 18-year-old Joshua Liendo is ranked first by 1.34 seconds. The third event of the morning will be the women’s 100 back where 2016 Olympic bronze medalist Kylie Masse is the top seed.

Then it will be the women’s 400 free featuring top see 2016 Olympian Emily Overholt who is ranked about 2 seconds ahead of 2nd seed Emma O’Croinin. 18-year-old O’Croinin won silver in this event at the 2019 World Junior Championships.

29-year-old Jeremy Bagshaw and recent University of Calgary 5th year Peter Brothers top the field in the 400 free. Both are already under the Olympic Selection ‘B’ Time (OSBT) while Bagshaw is about 4 seconds off the Olympic Qualifying ‘A’ time.

There were only two event scratches during the first prelims session, and they were both from the women’s 400 free. 9th seed Brooklyn Douthwright and 13th seed Kayla Wilson dropped the event. This was the only race of the day for both swimmers, and they both have the 200 freestyle on Sunday.

Why is it a surprise she’s doing the 100 fly? She’s the national record holder after all, and this is one of her best events. Obviously she’s gonna swim it

moreso that its the headline swim of day 1

condorelli’s 100 fly record is gone. we might just have a canadian man make an olympic final who isn’t brent hayden

I watched the race. He looked great, and to set a national record in a swim before 10am, unbelievable.

Looking forward to seeing her in 100 fly, at NCAA she beat Douglas and had an awesome back in IM relay!

Never know, but some silvers would be nice in the frees

Does Thormeyer have a bye in the 100 back?

Is there a way to watch this? After Australian and US trials this week I don’t know how I’m going to go cold turkey with no swimming.

CBC, and get VPN