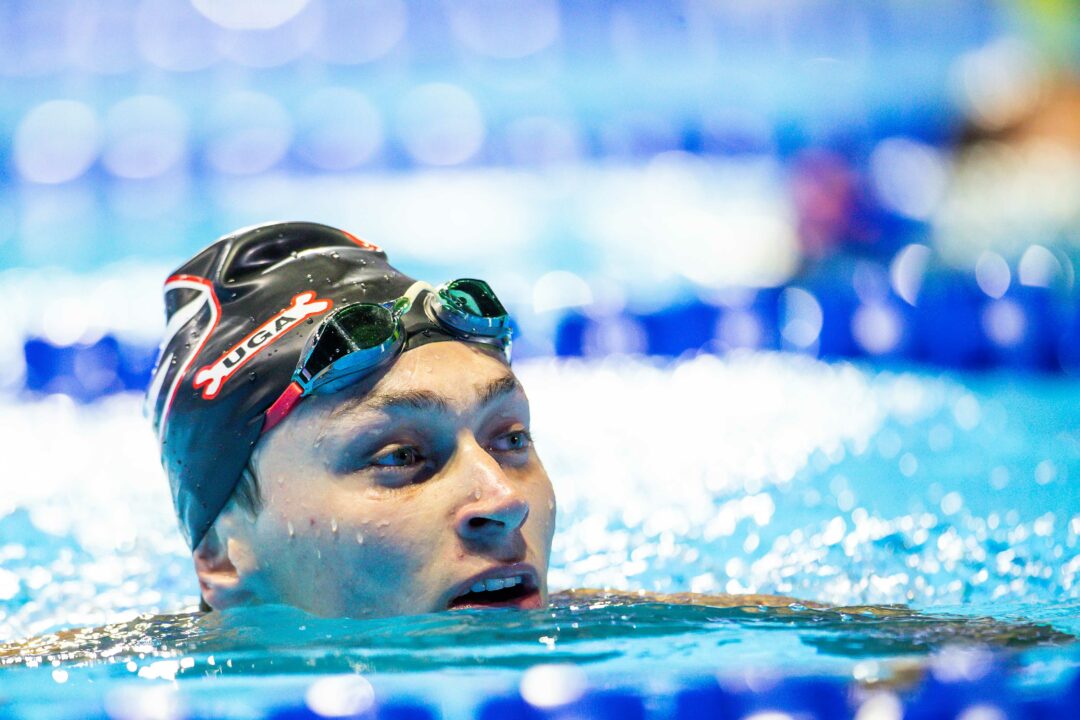 Auburn hosted SEC opponent Georgia for a men's and women's dual meet this past Friday, dropping both meets to the Bulldogs. Stock photo via Jack Spitser/Spitser Photography

Auburn hosted SEC opponent Georgia for a men’s and women’s dual meet this past Friday, dropping both meets to the Bulldogs. The men’s meet saw a tight 159-141 finish, while the Georgia women handled Auburn by 56 points.

Junior Zoie Hartman was on fire for the Georgia Bulldogs, winning all 3 of her individual events, and helping the 200 medley relay to victory. Hartman kicked things off in the relay, posting a field-leading 27.65 breast split to help Georgia expand the lead Eboni McCarty gave them on backstroke (25.13). Dakota Luther provided a 24.42 fly split, and Maxine Parker anchored in 22.33, resulting in a 1:39.53 final time. Auburn (1:39.89) got back into the race thanks to a speedy 23.85 fly split from Claudia Thamm.

Georgia’s Jake Magahey swept the men’s distance events, getting things started with a swift 8:57.69 in the 1000. Just as teammate Abby McCulloh did in the women’s 1000, Magahey clocked a big negative split, getting out to a 4:32.04 on the first 500, then coming home in 4:25.65. For context, that means Magahey was swimming approximately 14:26 1650 pace during his last 500 on Friday, which is a positive sign as we head towards mid-season invites, where he’ll likely race a mile.

AUBURN, Ala. – The Auburn men took No. 8 Georgia down to the wire in Friday’s dual meet but ultimately came up short, falling 159-141. It was a similar result for the Auburn women who dropped their meet against No. 8 Georgia with a score of 178-122.

“I thought we competed well,” Auburn head coach Ryan Wochomurka said. “We came up short on too many close races today. That’s something we’ve had conversations about leading into this week. So if there’s one area we could’ve been better, we just came up on the wrong end of every close race. That’s something we have to get better at culturally as a team and as a program.

“But outside of that, we competed extremely well. To be in the hunt on the men’s side and for it to come down to the last relay – we had to make them work for it today, and that’s exciting to see for where we’re going to be in February and March.”

Two of Auburn’s three individual wins in the pool Friday came from freshman Ellie Waldrep who swept the 100 and 200 backstroke events. Waldrep touched the wall first in the 100 back at 53.30 and then swam her fastest time at Auburn (1:56.63) to win the 200 back.

Senior Emily Hetzer earned the other win for the Tigers, finishing first in the 500 freestyle with a season-best time of 4:48.88. Hetzer took second in the 1,000 free.

Fellow senior Mykenzie Leehy, a graduate transfer from Houston, had her best meet as an Auburn Tiger with season-best times in the 100 freestyle (50.30) and 200 freestyle (1:48.97). Leehy finished second in the 200 free and was fourth in the 100 free.

Through 14 of 16 events, the Auburn men held a slight lead over Georgia thanks in large part to the efforts of senior Christian Sztolcman and sophomore Reid Mikuta.

It was easily the best meet of the season for Sztolcman who picked up the first win of the meet for Auburn in the 200 freestyle (1:36.78) and then came back to win the 100 freestyle, finishing in 44.12. Both were season-best times. Sztolcman also anchored the men’s 400 freestyle relay with a split of 43.01 to take second place.

Mikuta once again swept the breaststroke events for Auburn, winning the 100 breast in 53.53 and then touching the wall first at 1:59.54 to win the 200 breast. Mikuta, who also took third in the 200 IM, has won the 100 breast in all three meets this season.

For the second straight meet, Conner Pruitt won both springboard events on the men’s side. The senior scored 388.58 on 3-meter and 359.93 on 1-meter. Freshman Whit Andrus also had a strong day, finishing second on 3-meter and third on 1-meter.

On the women’s side, junior Ashlynn Sullivan led the way with a score of 313.88 to win the 3-meter competition. She also placed second overall on 1-meter.

“Overall, a really strong day,” head diving coach Jeff Shaffer said. “I’m excited with the direction we’re headed. Obviously, Conner showed his athleticism in taking both springboards. And then Whit and Hunter getting a second and third on 3-meter and third and fourth on 1-meter – both had some strong dives, which is encouraging.

“It was good to see Ashlynn get a little bit back to what I know she’s capable of doing.”

Friday marked the final dual meet of the fall season, but Auburn will now begin preparing the Georgia Tech Fall Invite later this month. The event, which features an NCAA-style format with prelims and finals, will take place over the course of three days, Nov. 18-20.

AUBURN, Ala. – Highlighted by a late comeback by the men’s team, the eighth-ranked University of Georgia swimming and diving team swept rival Auburn Friday afternoon at the James E. Martin Aquatic Center. The men’s team (3-1, 2-1 SEC) used strong performances in the 200 IM and 400 freestyle relay to overtake the Tigers, 159-141, while the women’s team (3-1, 2-1 SEC) bested the 23rd-ranked Auburn women, 178-122.

Sophomore Luca Urlando continued his dominant start with four victories, including a season-best time of 46.13 in the 100 backstroke that ranks second nationally. Urlando also led the clinching 400 freestyle relay with an opening split of 43.22, earning a B-cut via Georgia’s top 100 freestyle this season. Fellow SEC Swimmer of the Week Zoie Hartman also earned four wins, remaining unbeaten in the breaststroke events this season.

After sweeping the opening 200 medley relays, freshman Abby McCulloh and sophomore Jake Magahey remained dominant in the distance events. McCulloh set a new season-best time of 9:45.83 in the 1,000 freestyle, the third-fastest time in the nation this season. Magahey then prevailed in both the 500 (4:20.45) and 1,000 (8:57.69). In the sprints, senior Gabi Fa’amausili took first in both the 50 and 100 freestyle, earning B-cuts in both events, while Dillon Downing took the 50.

Along with Urlando, the Bulldogs were outstanding in the butterfly as senior Dakota Luther remained unbeaten this season with a pair of wins, including a season-best 1:56.65 in the 200. Luther’s commanding 200 win was followed by senior Andrew Abruzzo’s equally dominant 1:46.12 in the men’s event, with both swimmers winning by four seconds. Abruzzo also finished second in the 500 freestyle and 200 butterfly, with junior Zach Hils taking the 200 IM. In other wins, junior Ian Grum was victorious in the 200 backstroke and sophomore Sloane Reinstein won the 200 freestyle.

At the diving well, Georgia posted its strongest performance of the season, with sophomore Meghan Wenzel earning the Bulldogs’ first win with a Zone-qualifying score of 273.30. Wenzel also earned a Zone cut with a second-place mark of 301.20 in the 3-meter. On the men’s side, freshman Nolan Lewis qualified for Zones on the 1-meter with a second-place score of 310.35.

Georgia now turns its attention to the upcoming Georgia Tech Invitational, running Wednesday, Nov. 18 through Friday, Nov. 20 at the McCauley Aquatic Center in Atlanta, the site of this season’s NCAA Championships.

Luca came to play this year.

This is truly only the beginning!

Wocho madness is for real!

Also, Gadgaard is in Kazan.

Maybe they’ll qualify a relay for NCAAs this year

Really curious to see how Luca pans out over the long-run. Hopefully great.

Although more and more swimmers are swimming fast in not championship type meets, Georgia swimmers typically don’t swim extremely in season. I’m very interested to see what Luca will do at his mid season meet when suited and a little rest. He could be on track to have a phenomenal year.

We will see next week.