LSU Leads After Fast Night at the SMU Classic 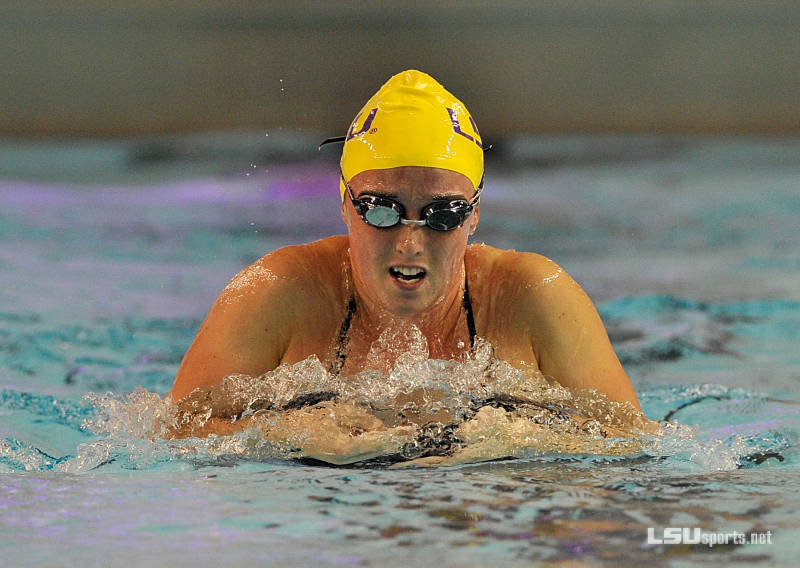 Colleen O'Neil of LSU is shown swimming breaststroke. O'Neil and the Tigers are in the lead after the first day of the SMU Classic, which featured several performances that were the fastest in the nation.

The 21st annual SMU Classic kicked off Friday with the LSU women leading the way by just 7.5 points over second place Louisville, 160-152.50. The meet was back and forth all night, with several teams trading wins in each round of finals. This evening featured the short versions.

The Classic has a different format than most invites, six teams are invited, and each team is allowed eight swimmers and one diver. There are two heats of each event, an A and a B final, with one swimmer from each team in each heat of finals. This years teams include host SMU, LSU, USC, Louisville, NC State, and Miami.

Full results from day one of the classic are available here.

In the 400 medley relay, the top four finishers also posted the top four times in the nation so far. LSU got started strong with a fingernail victory over second place SMU. The Tigers finished 3:35.86 from Caley Oquist (53.28), Colleen O’Neil (1:00.65), Amber Carter (51.88(), and Leah Troskot (50.05). The SMU Mustangs were second in the meet and now second in the nation, just one One-hundredth behind LSU, with 3:35.87 from Isabella Arcila, Tara-Lynn Nicholas, Marne Erasmus, and Adrienn Santa.

There was just .33 hundredths of separation between the two teams. SMU’s Santa out split LSU Troskot with a 49.83 compared to Troskot’s 50.05.

Louisville’s Tanja Kylliainen then posted the nations fastest time in the 400 IM, 4:10.89, almost a full two seconds ahead of LSU’s Sophie Weber, to win the A final, while USC’s Jasmine Tosky posted the second fastest to win the B final, 4:12.34.

Louisville, LSU, SMU, and USC would trade wins all evening, with the former three beginning to separate themselves from the pack heading into the second day of The Classic.

The 200 freestyle A final was won by USC’s Chelsea Chenault in 1:45.31, followed by Louisville’s Abbie Houck and LSU’s Megan Cox. The B final saw LSU’s Danielle Stirrat win with a 1:47.96, followed by SMU’s Nathalie Lindborg, and Louisville’s Andrea Kneppers.

Thea Vock of the Miami Hurricanes won the one meter diving competition.

In the 100 fly Louisville’s Kelsi Worrell and Amber Carter posted the fastest to times in the nation. Carter came in at 52.86 while Worrell came in at 52.12. That finish was reversed in the B final, where the Tigers’ Kara Kopcso beat out the Cardinals’ Devon Bibault.

In the 100 breast,  Rachel Nicol of USC posted the fastest time in the nation with a 1:00.18 to win the A final. Louisville’s Andee Cottrell was second, and second fastest in the nation, with a 1:00.60. SMU and Louisville were also one and two in the B final, with Tara-Lynn Nicholas and Tanja Kylliainen respectively.

The scores through the first day are:

Friday night was a fast night at The Classic, and if it is any indication of what is to come, Saturday should be just as exciting.