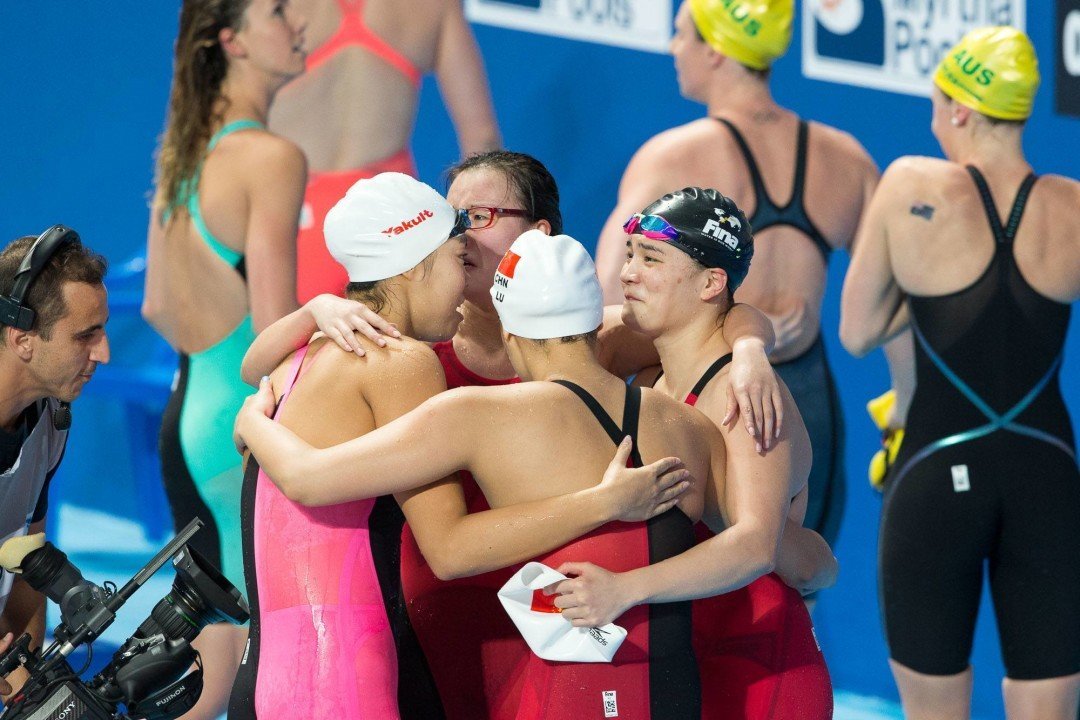 There were a few shake-ups in the women's relay standings as a result of the European Championships. Archive photo via Tim Binning/TheSwimPictures.com

Just as with the men’s relays, let’s take a look at how things have shaped up on the women’s side of the house now that the 2016 European Championships have concluded.

According to the FINA qualification system, nations have until June 10th in which to confirm the participation of their qualified relay team. As stated by FINA, if any of the qualified teams, both from the FINA World Championships Kazan 2015 or the remaining four teams with the fastest times in the FINA World Rankings of 31 May 2016, are not able to participate for any reason, the next fastest eligible team from the FINA World Rankings, in the qualifying events approved by FINA, from 1 March 2015 to 31 May 2016 in the respective event will be offered the relay team quota place.

*Note, as reported earlier this week, there is an item up for FINA Bureau member vote that has to do with the penalty if a relay-only swimmer fails to compete, which you can read about here.

As a result of the action in London last week, shake-ups indeed occurred in the women’s 400 freestyle relay rankings. In fact, half of the non-automatic-qualifying nations have been replaced. Denmark made a charge in both prelims and finals, notching times in London of 3:39.38 and 3:39.57, respectively. Both were fast enough to overtake the previous 13th spot held by Belarus and their time of 3:40.37.

Belarus is now busted down to the 14th slot, followed by Spain. Spain wasn’t on the list of qualifying relays until Euros when its relay line-up registered a time of 3:40.67 to overtake one of the remaining relay contender positions.

Germany’s time of 3:41.56 proved enough to hang on, as far as we can tell, to the final non-automatic-qualifying spot for Rio, which means that Switzerland’s time of 3:41.76 from London falls just two tenths of a second short of qualifying the team for the Olympic Games.

After solidifying a big win in the women’s 800 free relay to finish off the finals session of day four at the European Championships, Hungary moved up a position to take over the top spot of the four where non-qualified teams are eligible to qualify. Hungary’s ‘Iron Lady’, Katinka Hosszu, proved to be the difference-maker, as this improved time was a result of her 1:56.65 anchor.

The Netherlands got bumped down a spot to 2nd with their 7:52.06 still holding up, but both Austria (8:05.23) and Hong Kong (8:06.51) were eradicated from the rankings. Spain moved into the 3rd spot with their silver medal finish in London, and Belgium took over the 4th spot with their 7th place finish in 8:02.67.

Even with Sarah Sjostrom’s European Championship record-setting lead-off of 1:55.30, without key leg Michelle Coleman in the mix, Sweden’s 800 freestyle relay squad fell over 4 seconds short from its outing in Kazan. Coleman’s leg of 1:57.36 from the World Championships was sorely missed, as replacement swimmer Stina Gardell mustered a mere 2:00.59.

Prior to Euros, Finland was still the top nation outside the 12 automatic qualifiers, sitting at a 4:02.30 from last summer’s World Championships. But, the nation improved up on that mark, knocking just under a second off of its effort to further solidify its spot for Rio.

The Czech Republic also maintained its position in the third transfer spot, but improved its time by seven tenths from the 4:03.44 it put up at Worlds in Kazan.

Great Britain already secured its automatic qualification by clocking the 7th-fastest time in Kazan, but the foursome of Kathleen Dawson, Chloe Tutton, Siobhan-Marie O’Connor and Francesca Halsall managed to collectively drop GBR’s previous time of 4:00.02 to a new best of 3:58.57. That outing still renders the Brits in 7th place time-wise, but must give them a confidence boost to dip beneath the 4-minute threshold prior to Rio.

There are a few more points to be considered here. FINA declared that in every relay, at least 2 swimmers have to be qualified individually, and a relay only swimmer has to have reached the B-cut in the respective individual race. I just investigated this for the 400 free womens relay, but the latter rule at least is not fulfilled be all countries in the top 16. Belarus has one swimmer above the B cut in that relay, for example. And Germany will not enter the relay as they did not fulfill the national requirements which are harder to fulfill than ‘just’ being invited, giving Switzerland the last spot, but here it is the same, the 4th swimmer is just… Read more »

Loretta, things already changed on women medley.
Fina updated their site and Hong Kong had a competition on the beginning of May and went 4:03:10.. with that Spain is out now