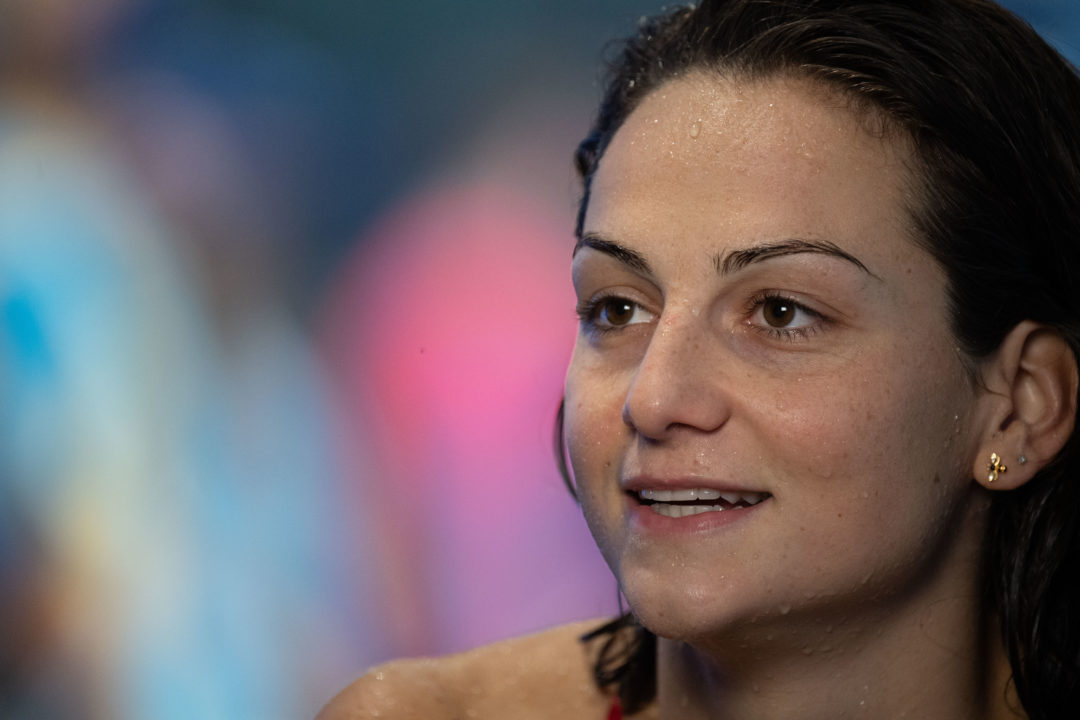 Beryl Gastaldello was really good at 'Skins' racing in season 1, but with breaststroke chosen for the women's race last week, she didn't get a crack. Archive photo via Mike Lewis/ISL

The Los Angeles Current hold a narrow 14-point lead over the Tokyo Frog Kings in match 3 of the 2020 ISL season, but finished day 1 on Saturday with a sweep of the medley relays.

In the 2020 season format, that becomes crucial, as the winners of day 1’s medley relays get to choose the stroke for the 50 meter ‘skins’ events for day 2. Those races are worth more points than any other events in the meet and are a huge opportunity to separate, including when combined with Jackpot scoring, as we saw in the first meet especially.

The women’s event seemed pretty clear cut for the Current, as Beryl Gastaldello and Abbey Weitzeil tied for 1st in the individual 50 free on Saturday. The only swimmer in the field who looks like maybe she could upset a Current 1-2 there is Toronto’s Michelle Coleman, who was just .15 seconds behind the Current swimmers and has the endurance in theory to battle through 3 rounds.

There is also an opportunity for some jackpots here, because this is not a deep field. The next-closest swimmer in the individual was .84 seconds behind Gastaldello and Weitzeil, with the Jackpot margin being .95 seconds. The Current already stole points from 3 swimmers in the individual event.

The men’s race was ultimately probably the right choice, though it wasn’t quite as clear cut. After Ryan Murphy dominated the ‘skins’ event in match 1, stealing 18 points in the semi-finals and 7 points in the final (which is to say, he Jackpotted everyone in both rounds), he’s got the clear hot hand.

But Shane Ryan of Ireland tied him in the individual 50 back, and Ryosuke Irie had a better split leading off the 400 medley relay – maybe a better analogy for skins because it was at the end of the session.

Irie didn’t swim the 50 back individually, which means both that he’ll have fewer swims on him, but also that we don’t know what he’s got in the 50 back. If he can survive the first round, though, he’s got a puncher’s chance at the win. That’s where Tokyo probably would need a win to take the meet title.

The Current could have chosen the 50 fly, where in the 100 Tom Shields won by half-a-second. There’s Szebastian Szabo lurking there in the 50 for Aqua Centurions though.

Great swim by Irishman Shane Ryan in the 50 BC, and super to see that Ryan M won’t have another walkover. If he wins out in the skins tomorrow then he’ll have worked hard to achieve that. Game on…