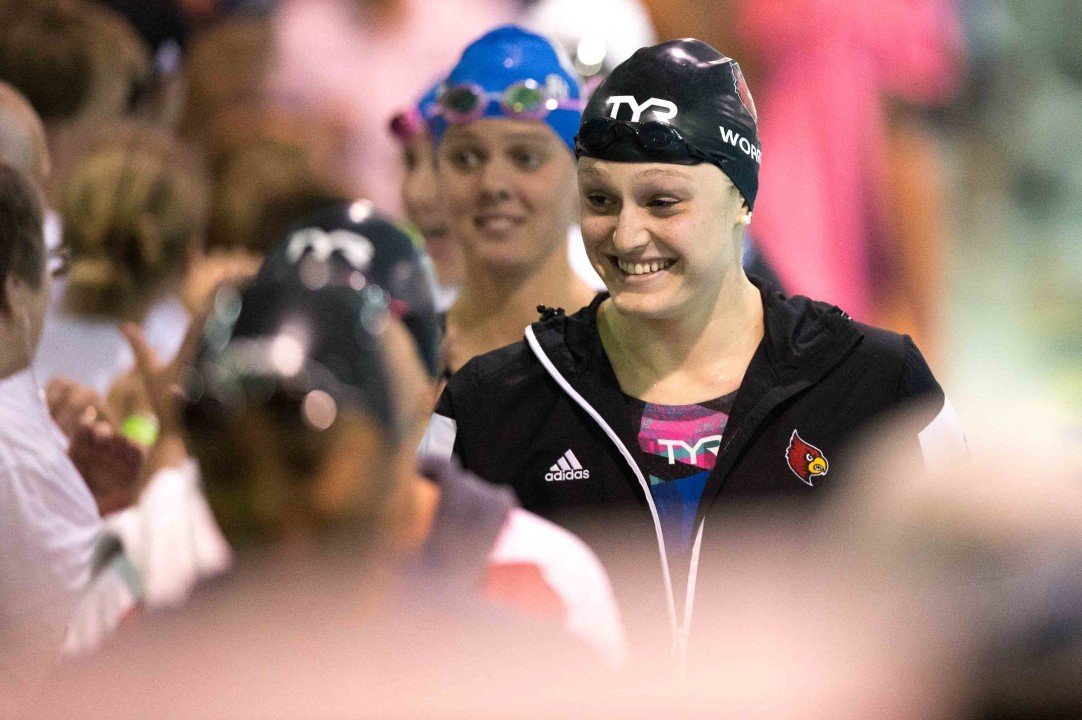 Worrell swam a 1:00.38 in the prelims of the women's 100 back at U.S. Nationals this morning. That was a huge drop from her entry time at 1:02.76 that she clocked this past June. Stock photo via Mike Lewis/Ola Vista Photography

That makes her the 14th fastest American in history and the 9th fastest American of 2015. It also would’ve been good enough to qualify for the semis at the World Championships, though Missy Franklin and Kathleen Baker have been faster at that meet.

Worrell came out of nowhere in this event. One might initially amount this to the fact that she’s made huge progress in yards, we just haven’t seen her swim a healthy long course season yet. While that may be true in the fly events, she really just hasn’t done the 100 back at all over the past few years.

Aside from battling illness last summer, she would’ve had to double up the 100 back with the 100 fly if she wanted to swim it in the NCAA yards season. The fastest 100 back time she’s posted in yards since 2012 was a 57.38.

It seems like Worrell has some versatility to explore now that she’s not limited to 3 events in the college schedule. Outside of the fly events, we could see her start to do well in this event. She may also be a threat in the 50 and 100 free where she was a 21.62 and 47.71 this past collegiate season.

She’ll swim out of lane 6 in the final, next to Georgia Davies and Hannah Stevens. Only 3 tenths of a second separate her from top seed Claire Adams, who swam a 1:00.08. Worrell was able to drop time from prelims to finals last night, so she’s definitely got the potential to swim a best time and break the 1:00 barrier tonight.

I like Hannah Stevens drop in time too. Last year at Nationals she went a 1:02.07.

I think a couple of ladies my break the minute barrier tonight. Hannah Stevens could be one of them.