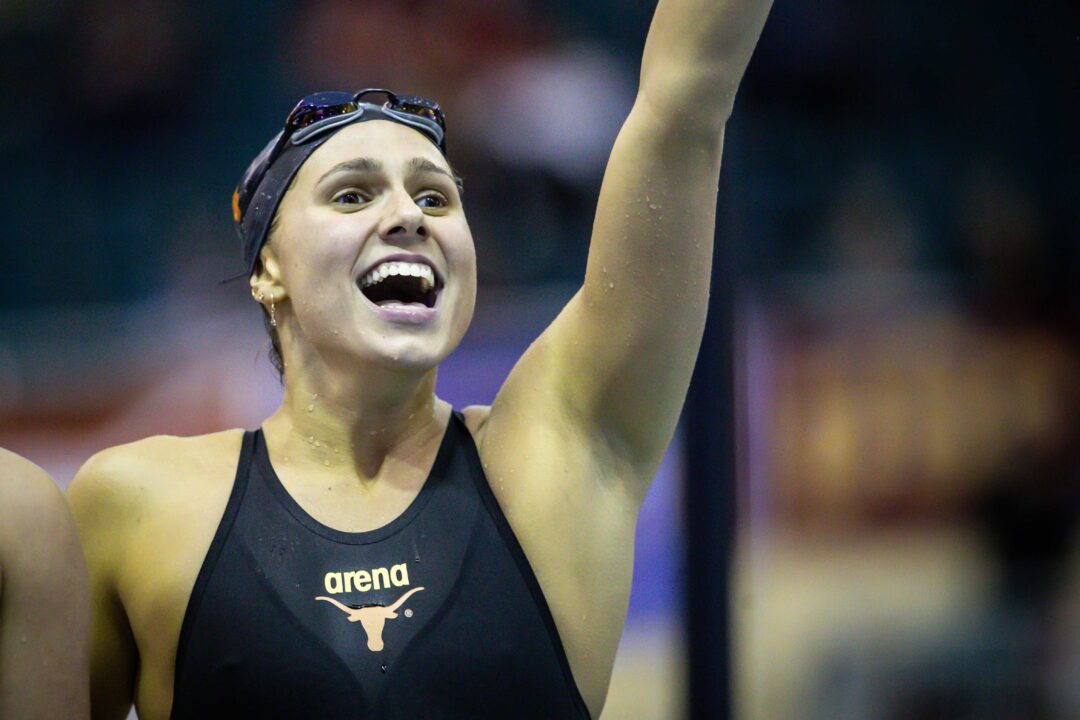 The Texas Longhorns continued to roll on Saturday in Austin, with all-time top US times from undergrads Kelly Pash and Carson Foster, and pro Shaine Casas. Archive photo via Jack Spitser/Spitser Photography

Carson Foster stole the show early on Saturday in Austin, but it was again the pair of Kelly Pash and Shaine Casas who served as brilliant understudies later in the session in the 100 butterfly.

Foster opened the men’s racing with a 1:55.89 in the 200 backstroke, which would have placed him 4th at the World Championships earlier this summer (read more about his swim here).

It also would have placed 3rd at the US International Team Trials behind Ryan Murphy and Shaine Casas.

Casas, a former Texas A&M Aggie who is now training at Texas as a pro, didn’t swim that 200 backstroke, however. Like much of the Texas men’s crew, he is racing secondary events this week, and that includes the 100 fly.

Casas swam the 100 fly prelims at the US International Team Trials in April, qualifying 6th in 51.75 before dumping the final. While he has now emerged primarily as a backstroke on the international scene, as a freshman Casas actually dropped the backstroke races for the butterfly races at the NCAA Championships.

Not to be overshadowed is University of Texas woman Kelly Pash in the 100 fly. She won in a time of 57.73, which is half-a-second better than she swam at the Tokyo 2020 US Olympic Trials last summer as a new personal best.

Pash didn’t race at the US International Team Trials in April, but if she had, that time would have placed her 4th.

The swim also makes her the 19th-best American in the history of the event, and ranks her 13th in the world this season.

In that race, Pash, a rising senior, finished ahead of a pair of sub-minute Texas teammates. Emma Sticklen, a rising junior, was 2nd in 59.00, and Dakota Luther, who is transferring in to Texas next season was 3rd in 59.44. Sticklen’s swim misses her best time by just .14 seconds.

This reaffirms that the Longhorns will have the deepest butterfly group in the NCAA next season.

Casas scratched the 2IM? Dude is consistently inconsistent maybe he is just messing with us.

I hope he is messing with the haters out there, but I seriously doubt he even cares what the peanut gallery says. At least I hope he doesn’t.

Texas women won’t have the deepest fly group. Stanford will have Huske, Curzan, Smith, Lucy Bell and others

Hook at Stanford, too!

Texas 200 flyers will blow away Stanford. Not even close, especially with addition of Luther. Horns return four of top 6

What’s it like to be a fast age grouper in an outside lane getting smoked by these guys?

I would assume sorta awesome? Like maybe it pulls you along to a PR, would be pretty cool.

Especially since all were Olympic gold medalists at one time.

I think this article downplays how impressive Shaine’s swim was. I don’t understand how you can say Casas was an “understudy” today when his time is more competitive, both all-time and this year. He would’ve been second at trials and at worlds and the article doesn’t even mention that. Yet Carson gets an entire article for a less impressive swim. Carson’s swim was great too, but come on.

Yea Shaine is now 50.5 fly, 52.5 back, and 48.2 free, which is sprint versatility we’ve never seen before. I can also think of Phelps with this kind of versatility, maybe Ceccon if he swims a 100 fly at some point.

Phelps actually has a much faster aggregate time in those three(people forget he was 53.1 in the 100 back).
Shane would need to take two of those times under the next second threshold in order to beat Phelps
The free is probably coming very soon but do you see him going sub 50 or sub 52?

All of Phelps’s best times were with now-banned suits. His best fly (remember the Cavic trash talk to use a Jaked?) and free times were with a full-body supersuit. Back probably was, too.

I’d be surprised if his best backstroke time wasn’t from 2007.

Yeah that’s my point. If you care about the suits so much, you’d acknowledge that the suit Casas is wearing now is much closer to the LZR Phelps wore in 08-09 than the textile suits worn in 2007. And yeah I do think he was faster than Peirsol. He was only .04 off of Peirsol’s world record set earlier that year at worlds, immediately after swimming a 200 free.

Well, ffs, Natalie Coughlin beats all of them by a mile.

Eh idk, Dressel’s never really had an amazing free split (esp not off a relay start) so he sorta has that fly leg locked down imo. (Unless he regresses a bit there and someone else is 50.flat.)

Unless he leaves a meet early, then he’s not really in contention.

A 46.99 anchoring the mixed medley and swimming through all the chop after being 7 seconds behind

Dressel has swam multiple 47 lows off flat start in relays . That’s as amazing as it gets.

What OP means (and he’s correct) is that Caeleb’s flat start is so elite he doesn’t get the same boost from a relay start as some other guys.

For example: Apple and Adrian own a faster relay start best. Whereas Caleb’s best of 46.99 is actually slower than his flat start best.

Exactly, which makes that guy’s username sorta funny. In the context of this discussion, ZApple’s 46.6 is better!

Dressel’s split 49s in fly, we don’t have another guy that can do that (yet). And like you said, we’ve got guys that have flying-start free splits that are as good as his best.

Just so you’re on the right page.

Or just not a team player who can’t produce on relays, kinda like Lily. His fly splits have never been that great either. 49.0 relay off a 49.45 flat start is OK. Phelps dropped 0.5 sec at the end of his ridiculous 2008 schedule after winning the 200 IM that day. Dressel swam a 50 free.

Just to pick a nit here, but it’s more a factor of Caeleb’s limited opportunities to do non-leadoff free relay swims than it is a factor of the relay start itself. Even if he has a slow rolling start it’s still going to be 3-4 tenths faster than his fastest flat start, just because of human limitations of reaction times. Let’s stop spreading the fallacy that Caeleb’s flat start (.58 – .65 reaction time) is as good as an average relay exchange (.15 – .20).

It’s not the reaction time, it’s the flight pattern. His angle of entry with a relay windmill swing is not nearly as good as his limited arm swing on his flat start. Probably because he has no initial pull-down on the block. He talks all the time about how his block pull is so critical. He even blamed his WC loss in the 50 fly to Ben Proud that time on some substance on the lip of the blocks that made his hands slip on the pulldown. I think it truly is mechanics.

Would be interesting if he could get to 15m faster gripping the block vs doing a traditional arm-swing relay start. (You’d kinda have to get someone to give him a start command, given he wouldn’t really be able to crane his neck up to see the swimmer coming in. But I think it might be faster in his case!)

what’s your evidence of this? If he is clearly better off the blocks with gripping rather than windmilling his arms, then he would be be gripping the blocks on relays starts, getting the same relay reaction time (or better) with improved “flight pattern.” It would still be 3-4 tenths faster at minimum. The very fact that he still does the step forward arm windmill relay start tells me that it is faster than the grip start.

The number of downvotes on this is absurd. Like come on everyone, how many sub 50 fly splits does the U.S. have at their disposal versus the number of 46’s?

lol I think it’s from my last line.

I had to get some jabs in!! (Which I know seems a bit mean-spirited.)

He has regressed a bit. Wasn’t even in the top 10 rankings with all the Popovici 47’s in the 100 free, didn’t break 50 in the 100 fly, slower in the 50 free. Yadayadayada, injured, sick, whatever. Too chicken to tell us. He’s definitely not viewed as invincible anymore.

But then I see these, and realize I’m maybe not being troll-y enough

Honest and not braindead from the hype, troll-y, whatever.