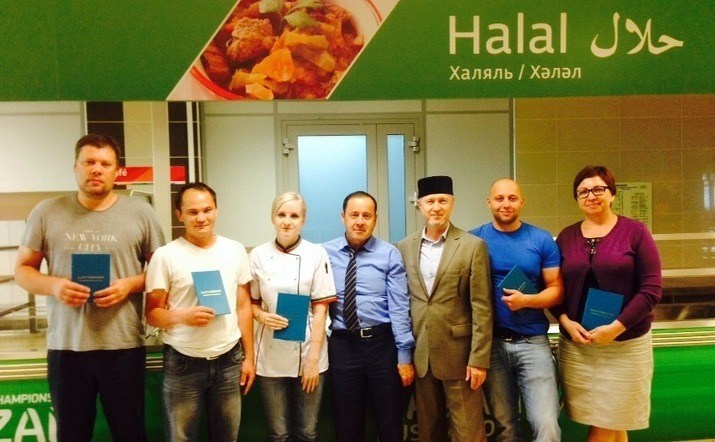 The chefs that will work at the FINA World Championships in Kazan have been trained in a professional program called "Halal: Theory and Practice." Current photo via Kazan 2015 News

The chefs that will work at the FINA World Championships in Kazan have been trained in a professional program called “Halal: Theory and Practice.”

Chefs that are going to work at the 16th FINA World Championships have completed professional training programmes called ‘Halal: theory and practice. During the month, the specialists improved their culinary skills under the guidance of specialists of the Halal Standards Committee of the Muslim Religious Board (MRB) of the Republic of Tatarsan. After the programme was completed, Chairman of the Halal Standards Committee of MRB of Tatarstan Marat Nizamov presented certificates to trainess.

Participants learned about the raw materials used to make halal food. They were also trained in the requirements of personnel, production and transport facilities, instruments, working clothes, packing, marking and the examination of products’ compliance with the norms of Islam.

Kazan 2015 earlier announced a special catering strategy for athletes at the World Championships, which was approved by FINA.

Catering facilities will have 4 types of cuisine. They will serve European dishes, including a Mediterranean menu, pizzas, and pastas. Asian cuisine and halal/kosher meals will be available. Athletes will also have vegetarian meal options.