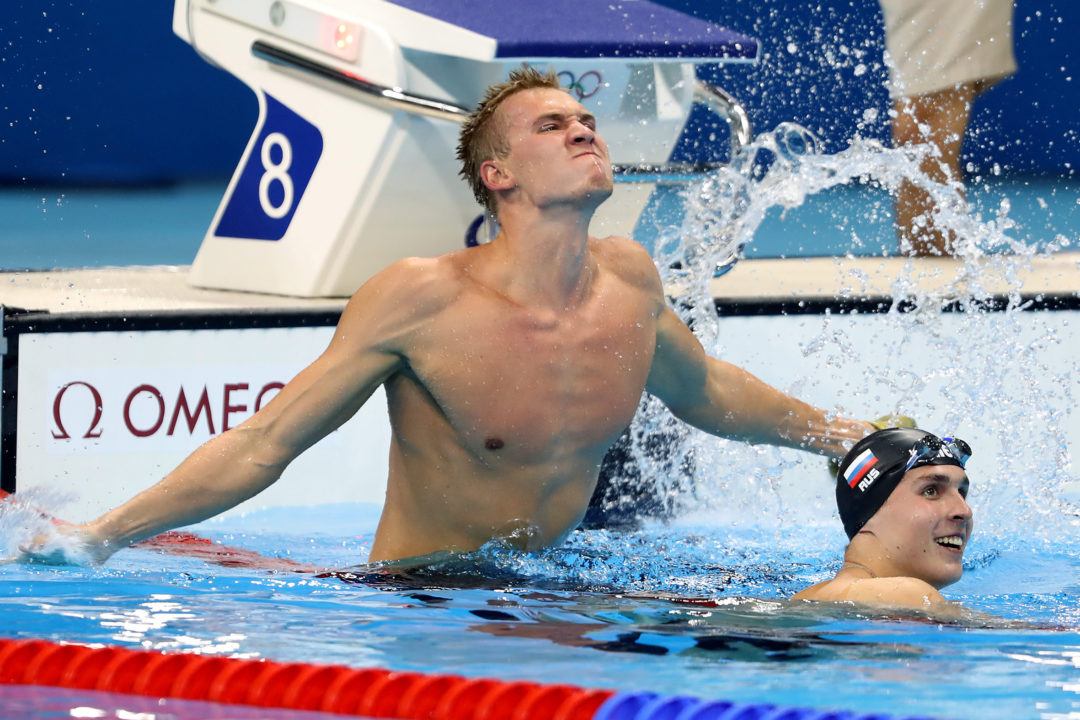 23-year-old Dmitriy Balandin of Kazakhstan may retire after these 2018 Asian Games. Archive photo via Simone Castrovillari

Kazakhstan’s Dmitriy Balandin is competing at the 2018 Asian Games currently underway in Jakarta, Indonesia, but the competition may indeed be the reigning 200m breaststroke Olympic champion’s last meet.

“I don’t know what my life is going to be after the Asian Games,” he said, as reported by the AP this week. “Maybe I finish swimming after Asian Games, but I don’t know now.

“Really, I am a little bit tired for swimming. I’ve won all I wanted in my swimming career.”

The 23-year-old surprised a stacked field in Rio with his podium-topping performance, but before that he swept the breaststroke events back at the 2014 Asian Games.

Since winning Olympic gold, Balandin has been a domestic hero, motivating young aspiring athletes within his home nation.

“In my country, so many people know my face now,” Balandin said. “So many children come to me and want to take photos with me.

“It’s great because my country’s swimming has taken a new step. So many children (are) swimming now.”

Most recently, Balandin scored a silver and bronze while competing at the 2017 World University Games in Taipei. The Kazakhstani captured modest 2018-bests of 1:00.43 and 2:09.31 in the 100m and 200m breaststroke events, respectively, entering Jakarta.

At these Asian Games, Balandin withdrew from his signature 200m breast event, citing a precaution for his lower leg injury. However, he went on to claim bronze in tonight’s 100m breaststroke, collecting a time of 59.39, a mark that checks-in as Balandin’s season-best and just .01 off of his own national record set at the 2015 World Championships. But, if that will that be enough to keep the Kazakhstani swimmer in the sport remains an unanswered question.

Balandin still has the 50m breast sprint coming up on Friday, August 24th.

Seems it may just be hard to find motivation after winning Olympic Gold. One could argue Schooling had the same thing happen to him. Although, Balandin’s 100m time was great so I’m not sure. I tend to believe him when he says he’s won all he ever wanted to win. Curious how much a Gold medalist can earn in Kazakhstan though. Perhaps money plays into it?

It’s surely not easy to find motivation again after winning an Olympic gold surprisingly from the 8th lane.

He may not be thinking about retirement if he weren’t injured.

But, he won AG golds, he is Olympics champion, he probably earns so much already in Kazakhstan, and then to get injured. Must be tough to find that motivation back again when he won’t likely be back to his best in his top event (200 BR).

Even the GOAT lost motivation after getting like 14 Olympic Gold Medals. Or rather, especially. Once you reach your dreams, the only thing left is to have fun in the sport, or retire and have fun watching.

I hear in his country there is problem. He may want to focus more on that.

Although Kazakhstan is glorious nation, it have a problem too.