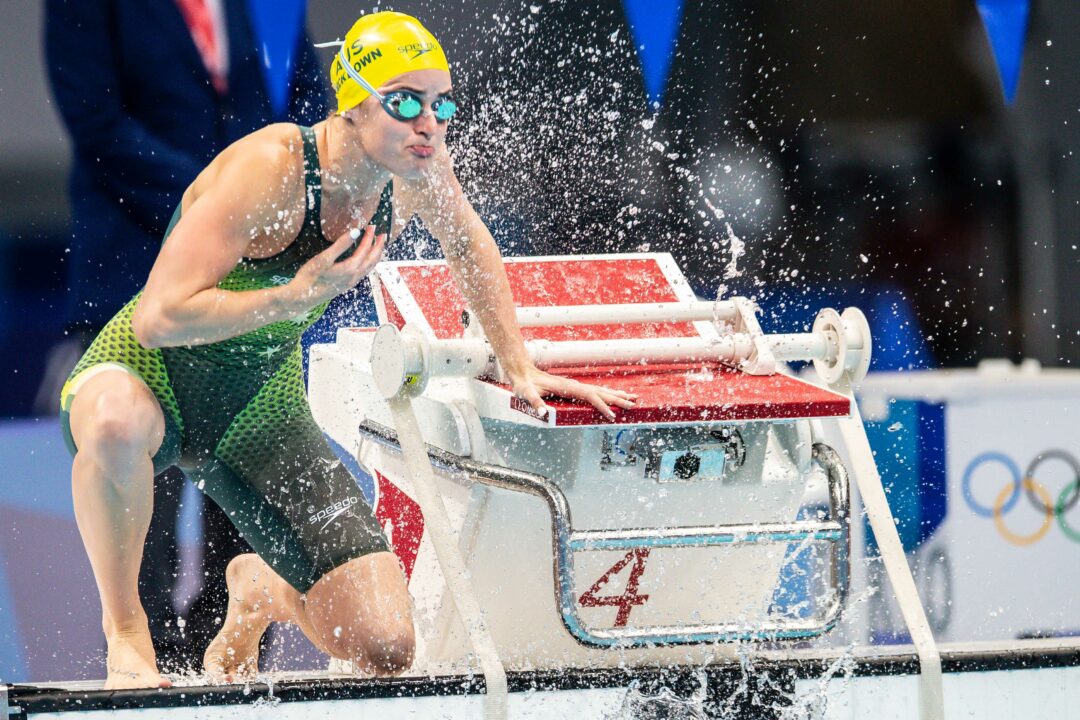 Titmus is over six months older than Katie Ledecky was the last time she set a world record, which came in the 1500 free back in 2018.

16-year-old standout Flynn Southam headlines a roster of 32 Junior Dolphins who will represent Australia at the Junior Pan Pacific Championships in August.

Kaylee McKeown, one of the stars of the Tokyo 2020 Olympic Games, is currently doing trial runs with several of Australia’s top coaches as she seeks a new training base.

Following an immensely successful 2020 Olympic campaign, winning three gold medals and one bronze, McKeown’s future training hub came into question after her coach Chris Mooney accepted a new job as the head coach of Bond University. Mooney had previously coached McKeown with Spartans Swimming at the University of the Sunshine Coast (USC).

This immediately begged the question: Will McKeown follow Mooney? Will she stay put? Will she go elsewhere?

Speaking to Coleman Hodges on the SwimSwam Podcast, McKeown revealed that she’s currently doing 1-2 trial runs each with coaches Michael Bohl, Dean Boxall, Mooney and whoever takes over as the new USC coach in Mooney’s place (there’s word that Michael Palfrey is in line for that position, but nothing has been confirmed).

Bohl currently coaches at Griffith University on the Gold Coast, leading the likes of Emma McKeon—who is coming off a record-setting seven medal haul in Tokyo—and seven-time Olympic medalist Emily Seebohm. It was also recently announced that 2016 Olympic champion Mack Horton would be joining the program.

Boxall is the head coach at Brisbane-based St Peters Western Swim Club, with his training group headlined by another breakout star of the Tokyo Olympics, Ariarne Titmus.

Titmus won gold medals in the women’s 200 and 400 freestyle, with the latter being an epic head-to-head victory over defending champion Katie Ledecky, and she added a silver in the 800 free and a bronze in the 4×200 free relay. Titmus also came incredibly close to breaking a pair of vaunted world records in the 200 and 400 free at the Australian Olympic Trials.

McKeown will also experiment training with Mooney at Bond, along with the new coach of the USC Spartans.

She told SwimSwam that she wants to go somewhere where there are high-level athletes and doesn’t know when she will make a decision.

After debuting at the 2017 World Championships shortly after her 16th birthday, winning a silver medal on the mixed 4×100 medley relay and placing fourth individually in the 200 backstroke, McKeown won a pair of silver medals at the 2019 Worlds (200 back, women’s 4×100 medley) before becoming the best female backstroker in the world over the last 12 months.

After inching towards it multiple times, the 20-year-old broke the world record in the women’s 100 backstroke at the Australian Olympic Trials in a time of 57.45, and followed by winning Olympic gold in a time of 57.47.

In the 200 back, McKeown set a new Commonwealth and Australian Record of 2:04.28 at the June Trials, cementing herself as the third-fastest woman of all-time, and then won Olympic gold in 2:04.68.

Stay tuned to SwimSwam’s YouTube channel for the full conversation with McKeown.

I watched her train this week at Griffith, she was happy training with her sister and with Michael Bohl. Soon she will name her new club and coach.

She should follow him. Only 2 years to go. Too many changes if she doesn’t.

There’s a bit of a history of god-tier talents losing their magic touch after switching from their long-term coach. I’m thinking the likes of Thorpe, Agnel, Hosszu, even Lochte. Of course, each of these cases were different, and there’s usually way more moving parts than just the coaching change.

Hopefully McKeown goes the way of e.g. Sjostrom instead though.

Thorpe was all good after his coaching change

He was still very good, but he never really got back to the spectacular record-breaking form he had as a teenager with Frost.

Things were not easy in or out of the pool .Im sure he wishes otherwise but as one of the more supportive coaches said in 2001 ‘ There is a high price to pay for being a top swimmer . For instance he recently spent 5 days in ICU with shower complications .

Mostly cause he deliberately stopped training for the 400, and he also was dealing with crippling depression.

Clyde Lewis is there now too

How about doing the same with some Americans that have looked at new programs to train?

She should train in the USA with one of the best coaches here! MUCH BETTER TRAINING and environment!!! Gregg Troy, Braden Holloway or Dave Durden.

The aussie girls dominated the olympics in tokyo . Aus > Usa

Struggling to think of the last Olympic champs on the women’s side any of those three produced.

They have already done a story on all the American woman multiple gold medallists from Tokyo moving base….

Alright everyone – drop your predictions of where she’ll end up ⬇️

She should go to Dean Boxall and take a quick look at the “dark place” Boxall and Arnie Titmus always so joylessly discuss. And Kaylee, send Chris Ronalds and the independent commission a full report when you get there.

So you are saying she ought go to Dean . I agree.

Mohammed should go to the mountain .Go Big .

Bohl. Her sister is there.

I like that y’all are now scooping yourselves. TAKE THAT COLEMAN, NO BREAKIN’ THIS STORY!!

This will teach me! I’ll think twice before doing my job next time

Is there a longer video coming or did you only speak to her about the coaching changes?

Nevermind. Question is answered at the bottom of the article.

(There’s a whole industry of sports reporters whose entire schtick is breaking a story 45 seconds before anyone else, was more a comment on this crediting a thing that hadn’t come out yet.)