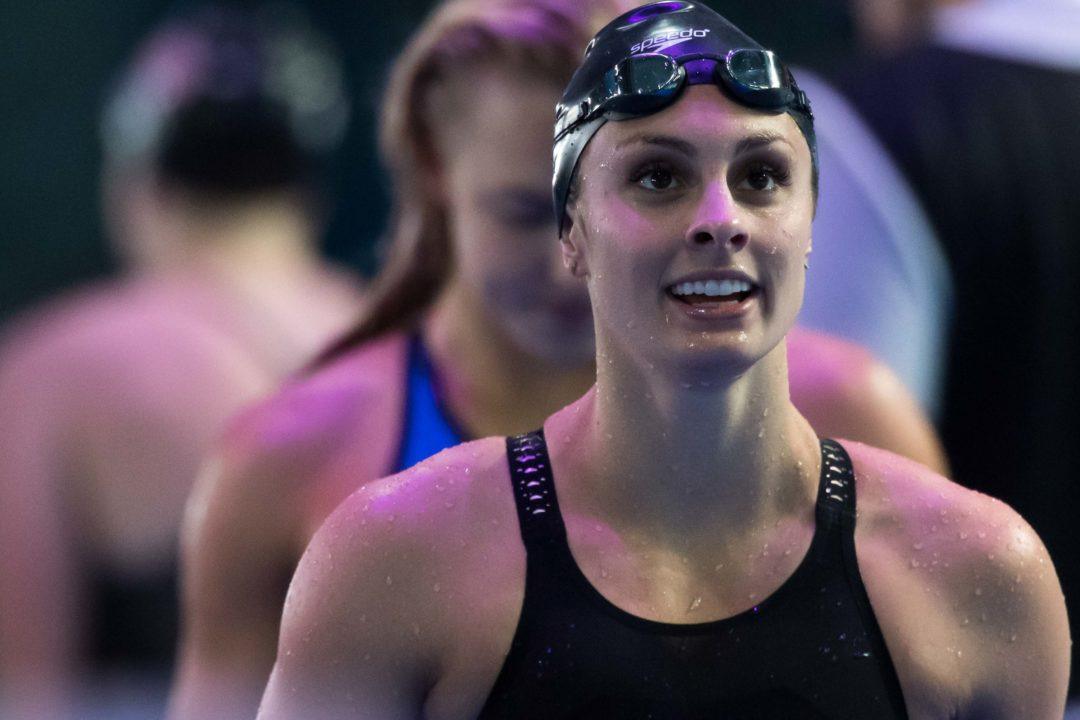 USA Swimming’s Virtual Convention announced that 2-time Olympic medalist Katie Meili will be the Board of Directors’ new Athlete Representative and Kathleen Fish will be the new At-Large Director. Fish currently works as the Chief Research, Development, and Innovation Officer at P&G.

Meili made her international debut, representing the US for the first time, at the 2015 Pan American Games. She raced the 100 breast leg of the U.S. 400 medley relay team which won gold and she swam as part of the 4 x 100 free relay which placed second. At the 2016 Olympic Games Meili won bronze in the 100 breast behind Lilly King and Yulia Efimova.

Meili retired as an athlete in July, 2019 after completing her third year of law school at Georgetown University. The 29-year-old recently graduated with a law degree in May, which makes her a valuable addition to the Board of Directors.

She was nominated alongside Olympians Cammile Adams and Caitlin Leverenz Smith. Adams competed in the 200 fly at both the 2012 and 2016 Olympics, placing 5th and 4th respectively. Smith is a UC Berkeley alumni who won bronze in the 200IM at the 2012 Olympic Games.

Fish also brings many years of experience to the Board of Directors. Her 15-year-long swimming career included competing for Michigan State University. Fish continued to contribute to the sport for 35 more years as an age group coach, a swim parent, a board member for the Cincinnati Marlins, and currently as Chair of a Matter of 50 Meters, a new facility fundraising committee for the Mason Manta Rays. The Mason Manta Rays is a Silver Medal club team in Cincinnati, Ohio.

Fish was nominated alongside Jon Kossow, a Managing Partner at Norwest Venture Partners, and Eileen Hoffmann, the Founder and CEO of Fashionable Investing LLC.

Keeping in mind that both Tom Ugast and Davis Tarwater’s terms expire this month, the addition of Meili and Fish brings the Board of Directors gender ratio to 8 men and 7 women. Previously, the Board consisted of 10 men and 5 women.

Voting for USA Swimming Board of Directors’ new Athlete Representative was conducted by “eligible athletes” through electronic voting while the Board voted on the At-Large Director position live. SwimSwam has covered more information on the selection timeline, process, and the other nominated candidates in these previous articles.

Please understand that what I’m saying has absolutely nothing to do with Katie Meili as a person who might be good at this specific role (I’m sure she will be, given all accounts of her), but….

…why is the “Athlete Rep” someone that’s retired? I guess I should’ve asked this on the nominee page, but this is more recent, as all 3 nominees were retired (I believe?). Shouldn’t the Athlete Rep be a current, active swimmer?

One might consider that any athlete who is still currently competing will be quite busy, and feel potentially substantial additional stress besides their training and schooling if they’re still in school at cetera. Any of us who have competed at the college or other levels know that it is a stressor.

The other athlete reps are Maya and Natalie, so clearly there’s something to being retired. I think there’s a 10 year window after your last national competition where you are still considered an athlete rep.

Leverenz and Camille Adams were the other nominees. Same boat.

It depends on USA Swimming and the individual athlete. The USA Swimming staff and the board have used the athletes as “house boys” or “rubber stamps” in the past. Two of the athletes that I know that were on the board told me during the period of 2009 to 2017, they really didn’t know what was going on because there was the board and Chuck Wielgus’ “secret” board. On USA Swimming’s part, this needs to stop and this board’s goal needs to be total and complete transparency. The coverups, lies, financial tricks and lack of values and morals need to end. The athletes that get voted into these positions need to take an active role and demand to be in… Read more »

why does it matter? a recently retired swimmer is a wise addition to any swimming-knowledge arsenal. why put someone who is training 3+ hours per day on a board that they almost certainly will not have time or energy for. katie meili 4 years out of the olympics, i’m pretty sure she still is “with it”…

This is a ridiculous comment. I cannot comment on Mr. Stephens but Richard Shoulberg has an impeccable reputation going back decades with hundreds if not thousands of swimmers coached without incident.

Please get out of the Shoulberg cult and attend reprogramming therapy immediately. Let me know if I can help you.