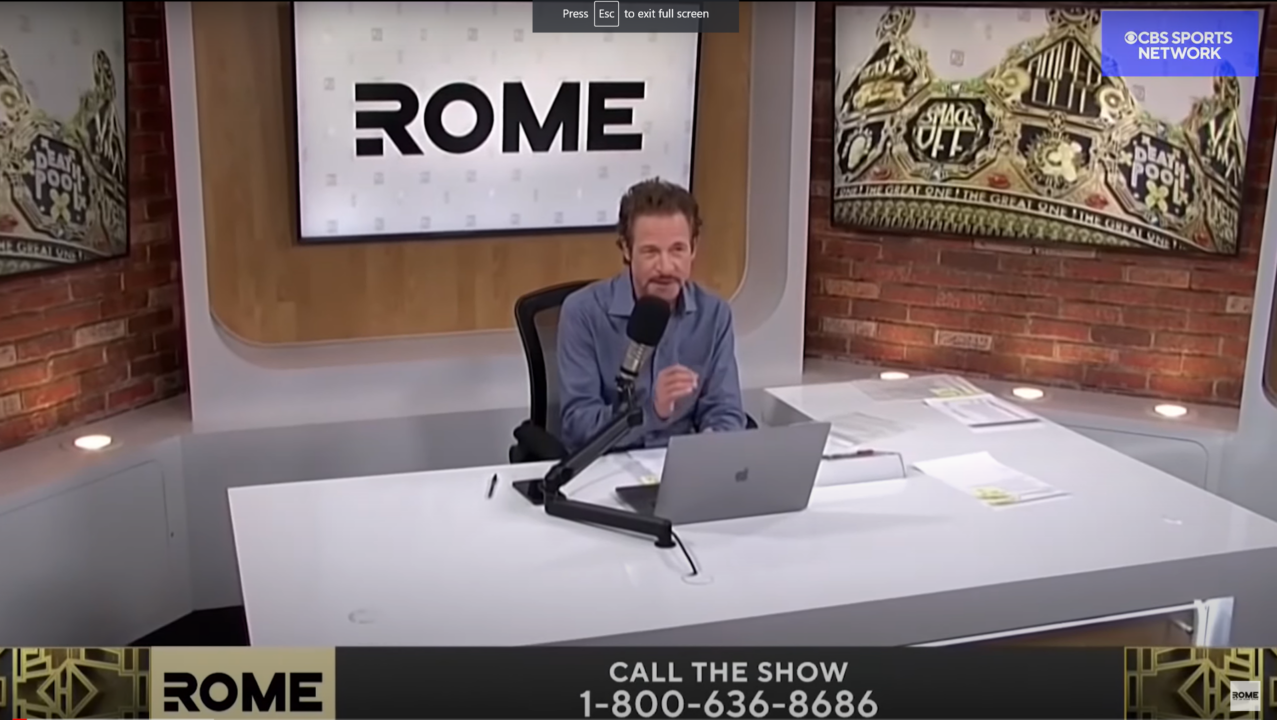 Update: a longer clip reveals that Rome was actually reading a Tweet from a listener.

Any American who has been watching the television broadcasts for the International Swimming League over the last two seasons knows that the meets usually occupy the television timeslot that on Monday through Fridays would otherwise be held by the Jim Rome show.

It turns out that some of Jim Rome’s readers are not too happy about that.

“And you idiots are going to preempt the show for swimming? Stupid,” a Tweet read by Rome on the air said, while lauding Rome’s interview with NBA star Draymond Green.

Speaking for himself, Rome continued:

“Again, I can only control what I can control, and only program what I can program, and I can only control this show, and even then, I can’t control this show, because I can’t control you clones. So what I really can’t control is what the CBS Sports Network does during these hours, and I don’t have a problem with it. I mean I don’t, they have other properties, other things they have in addition to the Jim Rome ‘radio slash TV show,’ including swimming. So yes, on the TV side, we’re going to go away for hours 2 and 3, and you will get swimming instead of me. And maybe that’s an upgrade in your mind. Maybe that’s an upgrade period.”

Rome hosts a daily 3 hour sports talk radio show that is syndicated across the country, and usually simulcast on television on CBS Sports Network

Rome has been one of the country’s most popular sports radio talk show hosts for decades. Almost always working alone, Rome is known for his “smack” style of analysis, which is freewheeling, aggressive, braggadocious, and uninhibited. Those who are familiar with his style know that his critique of CBS replacing him with swimming is just Jim Rome promo’ing the upcoming show, and his shift to radio-only for the rest of the morning, in Jim Rome’s characteristic style. It will appeal to his basest audience, many of whom probably have less-than-zero interest in watching competitive swimming, but might also intrigue a few to stick around and keep watching, just to see what Rome is ‘on about’ today.

He’s sort of serious, and almost definitely right that his show will draw more viewers than the ISL, but he’s also doing the in-character ‘Jim Rome’ version of a handoff between shows and networks.

So, while his bravado on a surface level can be offputting for some, it’s in fact huge exposure for the sport and a league that badly needs such exposure to get the ‘Rome treatment.”

The defending champion Cali Condors lead the team scoring after day 1 of the match, followed by Energy Standard and then (well behind) DC Trident and Iron. Playoff #1 will conclude on Friday starting at 1:00 PM Eastern, again pre-empting the last two hours of Rome’s show on CBS Sports Network.

Ngl never heard of the guy before

Jim Rome never had an original thought in his life. His entire career has been based on high decibel conventional wisdom. That’s why the barstool slobs are attracted to it. He shouts the same overreacting garbage on the air that they blab in sports bars or at home. Even the Jim Everett situation was a classic example. The barstool simpleton angle was that Everett was soft and always ducked from straight ahead rushers. So naturally Jim Rome took that angle and acted like he discovered something.

2
0
Reply
Just give the trophy to the condors already

Where’s Chrissy Everett when you need him?

This is how powerful my comments are – https://swimswam.com/cbs-sports-network-will-air-isl-playoff-1-on-thursday-friday/#comment-997285 – you’re welcome, everybody.

The listener writing in to whine that he can’t get that hour of the show on the teevee is pretty funny if you zoom out, though. Where the hell is he gonna find that extra hour or two of Rome Content!??! Other than:

Jim Rome. Never an athlete. Bigger ego than most athletes. Boo f-ing who.

“I can’t believe the sports network wants to show sports instead of ME!”

This is precisely why I despise sports talk tv/radio.

Let’s spend six hours this week talking about a single game that lasts three hours, with one hour of clock time and twelve minutes of actual play.
With 52% accuracy.

I can’t believe he still has a show