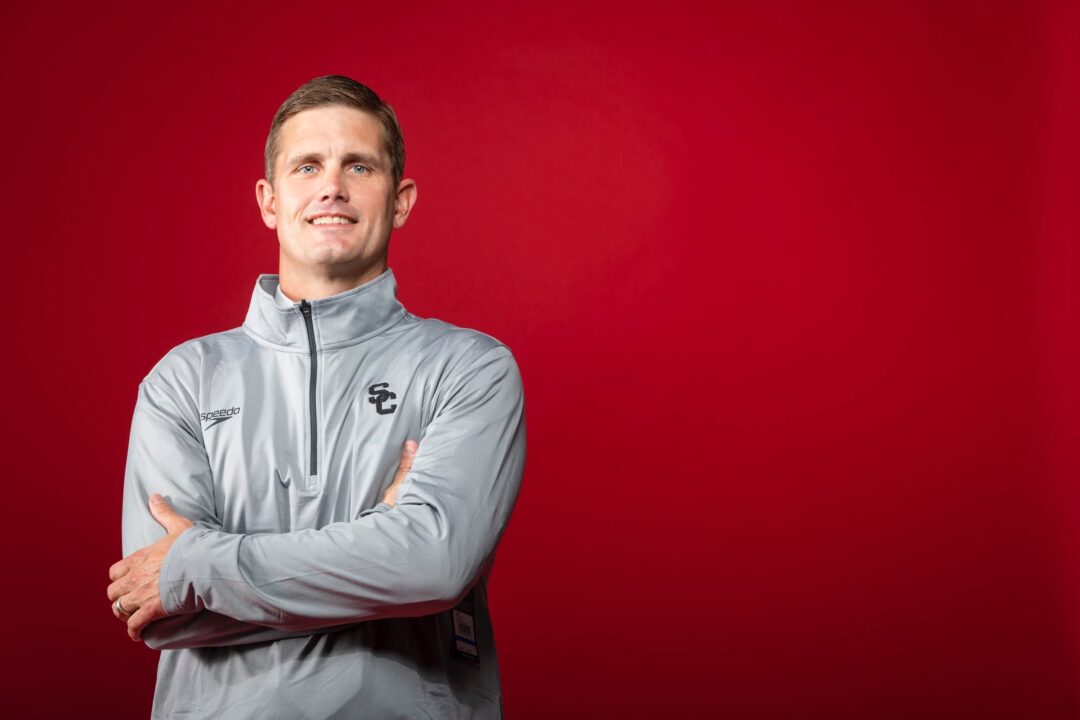 Only in the early months of just his 2nd season as the Trojans' head coach, Kipp was placed on administrative leave on October 9th. Current photo via USC Athletics

Jeremy Kipp has officially resigned as the head coach of the USC swimming & diving programs. USC made the announcement in a press release, stating that Kipp informed them of his decision earlier today.

The university has concluded a nearly 5-month investigation that began after allegations were made that Kipp kicked a water bottle that struck an athlete in the face. A source familiar with the investigation says that USC interviewed 12 swimmers who were present on the day of the alleged incident, and none told investigators that they saw a water bottle in the pool or strike a swimmer.

In the early months of just his 2nd season as the Trojans’ head coach, Kipp was placed on administrative leave on October 9th, after the allegations surfaced. According to USC’s release, Kipp’s said of his decision, “Due to the difficulty of these last few months, I have informed athletic director Mike Bohn that I believe it is best for me to separate from the program at this time.”

He went on to thank Bohn for giving him the opportunity to coach at USC, also saying he’s “proud” of the staff he was able to put together during his short tenure. Kipp concluded his statement by saying “I look forward to watching the Trojans’ continued success at the Pac-12 and NCAA Championships for years to come. I am forever grateful for the support I’ve received from many of the athletes I’ve coached in my career.”

Athletic Director Mike Bohn said of Kipp’s resignation, “We appreciate Jeremy’s nearly 10 years of service to our swim programs. We wish him well in his future endeavors.”

In his only full season in charge of the Trojans, the women’s team finished 4th at Pac-12s, while the men’s team took 5th, but scored about 100 points more than they did the year prior.

At the 2022 Pac-12 Championships, the women’s team came in 3rd, scoring 367 more points than last year, and the men’s team moved up to 4th, improving on last year’s score as well.

Lea Maurer has been acting as head coach of the program since Kipp went on his leave of absence. Maurer, the former head coach of the women’s team at Stanford, will continue in that role until a permanent coach is named – a position that she is the front-runner for.

I just imagine Tyler Fenwick on deck coaching in a tank top every day in SoCal and like, not sure how they wouldn’t have the top recruiting class every year. Such a vibe.

Too bad his results as a coach don’t match the “look” he would have on the pool deck in his tank top. . .

9
0
Reply
Outside IN
Reply to  pullbouy22

How you figure? Hasn’t he been part of the massive success of UVA women in a short time; and the mens continual improvement?

Katie Robinson is one of the greatest coaches in collegiate swimming right now. Hiring her would be a no-brainer!!

They should absolutely not hire Marsh. That’s a red flag avoid AVOID the AD would do well to steer clear from. He is a pros coach; his win at all costs mentality will get a college team in trouble.

If they don’t give it to Lea, maybe now is the time to steal Herbie Behm from ASU, or take a chance on a young club coach who can steer the program for decades, like Brett Arckey from Sarasota Y.

About time. Shame on him for dragging it out this long

“A source familiar with the investigation says that USC interviewed 12 swimmers who were present on the day of the alleged incident, and none told investigators that they saw a water bottle in the pool or strike a swimmer.” Amazing that they didn’t fire him for cause just based on anonymous SwimSwam posters’ comments and instead offered him their appreciation and good wishes for the future.

Kipp was removed from the deck in the early fall and hasn’t been allowed near the pool. He had nothing to do with coaching the team since then. All of the coaching and leadership duties fell upon Lea and the rest of the coaching staff-Chase, Kevin, and Meghan. Lea has done an exceptional job given the circumstances – being one coach short and the team reeling emotionally from Kipp’s erratic and abusive behavior. Unfortunately, it seems that USC has whitewashed the spin on his “resignation” (i.e. firing). Woe be to the team who considers hiring Kipp, who has consistently demonstrated that he’s a bully and has extreme anger issues. Given his track record, it’s a no-brainer that he should be… Read more »

Herbie behm should be considered

Upvote this it’s a good joke

If you’re looking for a stable, mature, proven leader with ties to USC (through ex-wife) — Shane Tusup.

Duck: thanks for the insight and “requirements definition” on who should be a serious candidate. Get it right this time is the key statement. The vetting process from AD Bohn and Chief of Staff Sosna: the “hard” qualities of stellar recruiting and athlete development and the “softer” qualities of temperament.

But this should be a process of finding the best candidate, not the least worst. Time to find that candidate and move on and have Kipp be a distant memory like the former USC football coach who shall not be named.

A postscript; if David Marsh was such an ogre why would Dave Durden have him on the Cal staff as a volunteer coach?

My daughter was at Auburn during their “golden years” under Marsh, who created a competitive/cohesive team from top flight recruits to non scholarship champions. Always a gentleman who knows how to create a great swim program. Never did understand the “hate”.

Per this article, all twelve swimmers interviewed said no such event occurred, so I think what you are seeing is a disfunctional USC athletic department that runs on gossip and unproven accusations. Shame on USC. Kipp is one of the finest in his profession and has had huge success in every program he has run. Duck seems to have an axe to grind, probably because you were a slow swimmer. Tough luck.

Also, you ever been around Jeremy Kipp? It wouldn’t be out of character for him to make threats to keep everyone quiet.

It would be a stretch to expect 12 swimmers with their faces in the water in the midst of a practice to witness the exact moment a metal water bottle hit a teammate (also in the midst of swimming) across the bridge of his/her nose. What several swimmers likely could attest to is hearing Kipp in a tirade directed at that swimmer and seeing an equipment bag that preceded the water bottle into the pool and it’s contents floating across two lanes. So yes, while it may be true that 12 swimmers interviewed didn’t actually SEE it happen, no one is denying it actually happened. And no, the athletic department doesn’t run on gossip and unproven accusations. There was an… Read more »