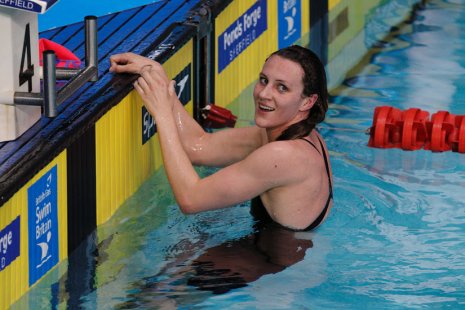 "I think I have a really great opportunity to be a part of open water," says two-time Olympic silver medalist from Rio, Jazz Carlin. Archive photo via (courtesy of British Swimming)

Two-time Olympic silver medalist from Rio, Jazz Carlin of Great Britain, recently raced one of her first open water swims and won gold. We reported how the 27-year-old competed in the 1-mile Serpentine Swim in London, where Carlin beat out more seasoned open water athletes such as Sarah Bosslet of Germany and Danielle Huskisson, also of Great Britain. It turns out Carlin was bitten by the open water bug and is now considering possibly adding the discipline to her pool repertoire for the 2020 Olympic Games in Tokyo.

Tunisia’s Ous Mellouli is the only swimmer in Olympic history to have won medals both in pool and open water swimming at the same Games, but Carlin is at least considering the possibly of trying for both squads in 2020.

“I’ve the Commonwealth Games and European Championships next year and then I’ll start thinking about how it could go for Tokyo,” the Welsh swimmer told BBC Sport recently.

“The danger with training for the longer distances is you can lose the speed you need for the shorter ones.

“I think I have a really great opportunity to be a part of open water and still try and get on that pool team, and it’s quite exciting to think that you could make history in an event.

“I’m very happy with two silvers, but you know it’s Tokyo and why not go for gold, hey? I’m a bit greedy I guess.”

Carlin will try the 10k open water event on for size at Qiandao Lake, Hangzhou City, China on October 15th as part of the FINA World Cup Series.

“I want to keep testing myself and see what I can do,” says Carlin. (BBC Sport)

Carlin won her Olympic silvers in Rio behind American Katie Ledecky in the women’s 400m and 800m freestyle events.

Welcome to the club!