Jack Conger Chooses 200 Fly Over 200 Back: Could 3 (Or More) Swimmers Break the American/US Open Record? 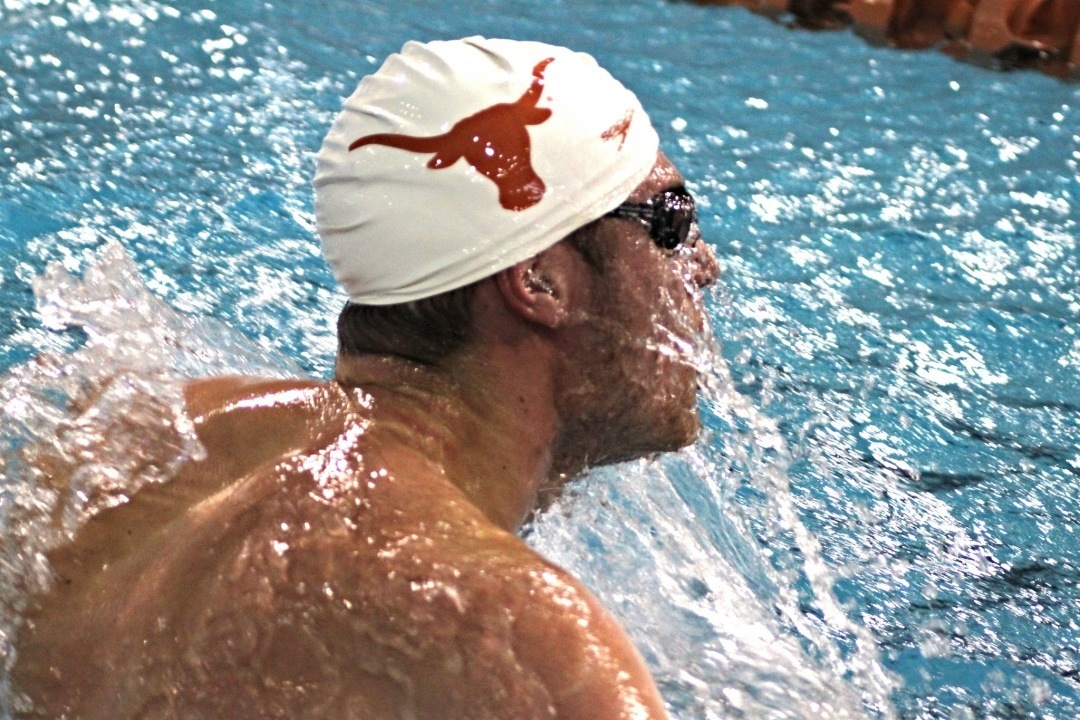 Jack Conger is opting out of the 200 backstroke to swim the 200 butterfly on the final day of the 2015 Men's NCAA Championships. Archive photo via Andy Ringgold/Aringo Photography

Jack Conger‘s butterfly has been off the charts this season, breaking school records at January dual meets and posting the fastest LCM 100 fly in the world at the Pro Swim Series – Austin meet. Most recently, he started off with a 200 butterfly time trial and broke the American and US Open records in the event with his time of 1:39.31.

There has been a lot of speculation about what Conger’s event will be at the NCAA Championships. Last year at the NCAA Championships he swam the 500 freestyle, 100 butterfly, and 200 backstroke. This year however, he is altering his schedule to focus on two new events. He got rid of his first day event, and will now be swimming the 100 butterfly and 100 backstroke on day 2. His final day there is also a change. He is opting out of the 200 backstroke to swim the 200 butterfly.

Coming into the meet, he will be the top seed in both the 100 and 200 butterflies, and is the ninth seed in the 100 backstroke. Many of our readers discussed the possibility of swimming the 200 back and the 200 fly on the final day of the meet, but as many people agreed, that would have been a brutal final day of racing.

The 200 butterfly is now set up to be very exciting. We could see three (or more) swimmers dip under the American and US Open Record. Conger holds it at 1:39.31, but Michigan’s Dylan Bosch set the US Open record last year at the NCAA Championships with his time of 1:39.33. He still holds the NCAA record with that time, as the NCAA will not accept time trial swims as official records. The third swimmer that has the potential to be with them at the finish in the 200 fly is Conger’s teammate, Joseph Schooling. He is currently ranked second in the country and seeded ahead of Bosch with his time of 1:40.59.

The last thing to consider is whether Conger will be able to put up another record breaking swim after swimming a full meet in Iowa. When he broke the American/US Open records at the Big 12 Championships, he did so in a time trial before the meet started. There is a big difference between a fresh swim on day 1 and your last swim on day 3 of the NCAA Championships. That meet can be physically and mentally exhausting. We know Bosch can do it after watching him break the US Open record last year on the third day of the meet, but it will be up to Conger to step up this year. If he does step up though, it will be very hard to beat him.

I think that was a wise choice by Conger and his coach Eddie Reece. Although Conger is probably the most versatile swimmer of the class of 2017, you can only swim so many events. I don’t know if he was shaved or fully rested at Big 12s, but if he and Schooling weren’t, wow will we see some fireworks at NCAAs. Also, Ryan Murphy is the backstroke kingpin. I have to assume Murphy was not fully shaved or rested either and will more than likely lower both 100 and 200 back American and NCAA records at the championships. Honestly, I would love to see a sub 44 in both 100 back and 100 fly. It could very well happen this… Read more »

Dressel won’t be a factor in the 2 Fly or the 1 Back- He’s not swimming them! 🙂 However, I agree that he has the potential to do some damage in the 100 Fly. He did pretty well at SEC’s and knowing Gregg Troy, there is no way that he was shaved or rested!

Talking about Dressel, will he be on Pan Am games or any major internacional LCM meet this year?

While Dressel is possibly my favorite swimmer in the sport for many reasons, it is silly to say he was not shaved or rested with the times he posted. I am not saying he will not drop at NCAAs, I too think there is room for him to drop and threaten for three titles, but by the way he and the rest of Florida swam, he was pretty far along in resting, shaving I have no clue. As for international meets for him, I know he was on the World University games roster for the 50 free, but Paul Powers took his place on that event. Whether he is still considered on the roster I do not know. However with… Read more »

What I dont understand is why they did not double up the last day. Conger is one of the few people who can do it. He would at least make the A-final in both (even if he threw up two major duds) and he could probably get first in the Fly and third, second or first in the backstroke (depending on how well he is feeling and also the Cal duo, Murphy and Pebley). That is MASSIVE scoring potential. It’s the last meet of the season, and the last day. Don’t tell me that Conger can’t do that double, because once again, if anyone can it’s him.

my guess is that Texas has enough individual participants along with their stacked relays to make more A finals than any other school. Conger is better off skipping the 200 back so he can win and break all the 200 fly records. I truly do think he can beat Murphy.

error. I meant to post that Conger can’t beat Murphy in either 1 or 2 back. He, Murphy, in my opinion, is the next Aaron Piersol!

The 200 back/200 fly double is too exhausting, especially on the last day of the meet. Beisel tried to do it last year, but her 200 fly suffered because of it.

Maybe Conger could make the A-final in both, but he can’t cruise the 200 back because there’s way too much competition to get into the A-final, and there’s no way he could win the 200 fly if his legs are dead from the 200 back. He’ll score more points doing the 100 back/fly than he would the 200 back/fly.

Has any guy done this double before? I know some women have but I haven’t seen any men do it

Eddie’s relay choices will be interesting to watch, especially as it relates to Conger. With Texas having so many guys for the 100 free, does swimming the 200 Fly affect Conger’s chances at swimming on the 4 x 100 Free relay. Six guys for four spots…

Uh, Youngquist, too, no?

I am thinking Conger will be on the 200 free relay, 400 medley (doing backstroke) 200 medley (back or free since he has the fastest or second fastest 50 free on the team. Second to Murray [correct me if wrong] who does 50 breast on that relay) Now that he is doing the 100 fly/back double, no way he does the 800 relay. Tom Shields did it and his 200 free suffered for it. The 400 free relay, Conger will go nearly all out in 200 fly prelims than swim the 400 free relay prelims, to test out where he is and if he can do it. I bet he can but how well and whether other guys on their… Read more »

I don’t think you will see Conger in the relay prelims in Day 2 or 3 given the depth of Texas. Especially on the 4 x 100 Free relay, where you want him as fresh as possible for the night session. No need adding to his yardage if you don’t have to in order to qualify a relay.