Iron Image: How Hosszu Has Excelled At Branding In An ‘Unbranded’ Sport 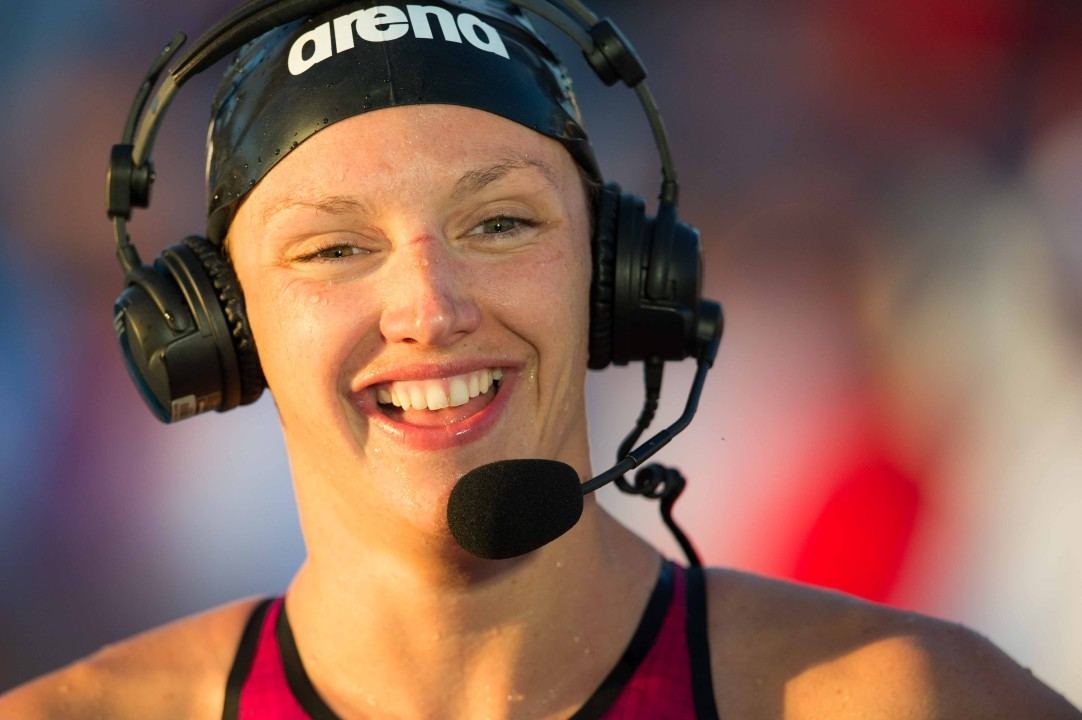 The attributes that have led to Katinka Hosszu's profound success in the pool - hard work, endurance, and a refusal to pass up any opportunity for a win - are what have her brand one of swimming's most-recognizable worldwide. Archive photo via Mike Lewis/Ola Vista Photography

OK, for an avid SwimSwam reader, that might not be so difficult. But for the masses of Olympic sport fans who only follow swimming here and there (and by “here and there” mean “every four years when the Olympics happen”), five names might be harder to come by.

Interestingly enough, though, one athlete with a better-than-average chance to show up on both lists is a swimmer without a single Olympic medal to her name. That name? Katinka Hosszu.

It’s perhaps disingenuous to introduce Hosszu as a swimmer without any Olympic hardware. That makes it sound as if she’s a relatively unsuccessful swimmer internationally, which couldn’t be farther from the truth. She’s won four consecutive FINA World Cup titles, 22 World Championship medals and more prize money than anyone in swimming over the past four years.

But the point still stands that in a sport most of the public forgets exists in the four years between Olympic Games, a swimmer who has yet to put together her iconic Olympic moment is somehow still one of the most recognizable figures for fans inside and outside of the sport.

That’s a testament to the branding of Hosszu – or “the Iron Lady,” as she’s now widely known. The Hungarian has built a worldwide brand unparalleled by almost any swimmer outside of Michael Phelps and perhaps Ryan Lochte (who is still often referred to as “the one who’s not Phelps” by people trying to explain to their swimmer friends whose reality show they stumbled across last week).

The Iron Lady moniker comes in part from Hosszu’s legendary toughness. An endurance machine, the Iron Lady has been known to enter every single event at a meet, swimming each race back-to-back-to-back – and winning each and every one. And she’s versatile: Hosszu holds somewhere around two-thirds of the national records in her home nation of Hungary. With prize money, medals or simply prestige on the line, it’s extremely rare to see the Iron Lady pass up entering an event she has any outside chance of winning, even if that requires the international torture method known as swimming a 400 IM, and 800 free and a 200 fly in the same session.

Just this week, Hosszu managed to break new branding ground, this time through a music video, complete with a catchy song and inspirational lyrics set to scenes of Hosszu working out, a production now dubbed “The Iron Nation Anthem” (Are you catching the iron-clad theme yet?). Get pumped up for your own workday and watch it here:

What’s impressive about the Iron Marketing Strategy is how comprehensive it has been in its range. She’s got Iron Lady swimsuits and swim caps, Iron Lady T-shirts and hats (pictured with Hosszu’s coach and husband Shane Tusup serving as a model to the right), and a motivational book titled Hungary’s Iron Lady. Hosszu has even had a grocery shopping trip interrupted by her own face staring out at her from a bottle of fruit drink on the store shelves.

For a sport that often jokes and complains about its own slide into obscurity for three years in each Olympic cycle (something I think a certain swimming writer has been doing plenty of in this very story), Hosszu’s ability to brand is a great reminder that publicity doesn’t happen by accident. It takes creativity, a willingness to try new and different things and a whole lot of hard work to build a brand, but for an athlete willing to put in the work, swimming’s current status as a lesser-known sport among spectators is not an insurmountable obstacle.

It’s very ‘on-brand’ for Hosszu that the very attributes that have led to her profound success in the pool – hard work, endurance and a refusal to pass up any opportunity for a win – are what have made her brand arguably the shining example for future career swimmers.

In 2016, Hosszu has that opportunity to finally break through on the Olympic stage. She’s the gold medal favorite in the 200 and 400 IM and could also be a medal contender in a handful of other races. But if the Iron Lady does indeed add that missing piece to her resume, it will only serve as yet another reminder to swimmers and to the sport of swimming itself that one doesn’t have to wait around four years until the next Olympic cycle to start building publicity.

The very thing that is often seen as the only way for a swimmer (and the sport as a whole) to gain fans – a successful Olympics – is the very last thing to be checked off the “career accomplishments” list for one of swimming’s most iconic figures. How’s that for Iron-y?

It helps to have sustained excellence to build a brand, nobody cares about someone that is consistently mediocre. Plus doing things that nobody else is doing. Katie Ledecky could learn something.

It always reminds me of Margaret Thatcher. Who was the worst. Don’t co-opt a crappy person’s nickname.

Thinking the same. Whenever I hear the ‘Iron Lady’ I always think of Thatcher, even when talking about Hosszu. Is that really who she wants to be associated with?

If my critics saw me walking on the Thames, they would say it was because I couldn’t swim. -Margaret Thatcher

I go to SWIM SWAM to read about swimming not politics.

Apparently I go to SWM SWAM to read about the latest in branding and self promotion.