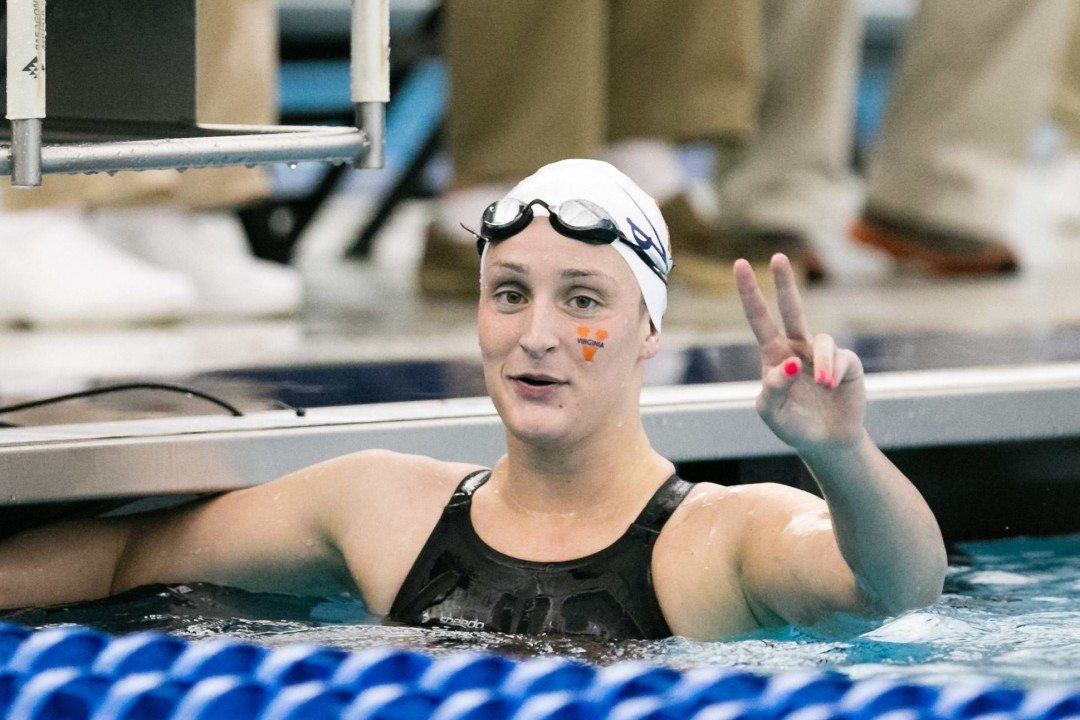 Leah Smith and the Virginia Cavalier chase their 9th consecutive ACC title in a meet that could see conference, NCAA and even American records challenged. Archive photo via Tim Binning/TheSwimPictures.com

Louisville senior Kelsi Worrell, the defending NCAA Champion and American Record holder in the 100 yard fly, has pegged another performance…

Kelsi Worrell hit the fourth-fastest 100 fly of all-time to start a three-event run of ACC Championships for Louisville on day 3.

For a conference that has remained unchanged at the top of the standings for the better part of a decade, the women’s ACC has remained one of the nation’s most compelling championship meets through a combination of outstanding depth, passionate rivalries and huge record-shattering performances.

The Virginia Cavaliers will chase their ninth consecutive conference title in 2016, boasting a monster roster of both depth and nationally-ranked stars. The Cavs currently lead the nation in both medley relays and have potential NCAA and/or American record-breakers in distance swimmer Leah Smith and backstroker Courtney Bartholomew.

The heavy favorites, Virginia will be chased by longtime conference rivals North Carolina, a very deep team coming off a great dual meet season. Also worth watching is the in-state battle for North Carolina supremacy between traditional power UNC and upstart NC State, which has become one of the nation’s hotter sprint schools. Virginia vs Virginia Tech is another great in-state rivalry – Virginia Tech is the kind of team that, while not flashy, always seems to finish near the top of the conference

Louisville features American record-holding flyer Kelsi Worrell, who swept the 100 and 200 fly races at NCAAs last year while becoming the first woman ever under 50 seconds in the former race. The Cardinals also have some elite freshmen, and in just their second season in the ACC, have already made their mark on the conference.

Then there’s a glut of rapidly-improving teams that really stack this conference up in depth. Duke is one standout, coming off a run of nationally-ranked recruiting classes and holding some of the ACC’s top relay times this season. Florida State is another rising program to note.

Boston College – Maureen Barron (senior sprinter), Abbi Kordell (junior breaststroker/IMer), Amanda Bieler (sophomore distance freestyler) – Bieler was BC’s only individual point-scorer as a freshman and should have a shot to score again, while Barron is the backbone of the Eagle relays.

50 Freestyle – With this much freestyle prowess loaded into one conference, the splash-and-dash should be among the most exciting events. Riki Bonnema is the defending champ and conference record-holder for NC State, but Louisville’s Kelsi Worrell is another 21-second swimmer. Duke’s Maddie Rusch has put herself into the running along with Virginia’s young talent Caitlin Cooper and their veteran Ellen Thomas.

100/200 Breaststroke – These races look less like a wide-open field and more like a showdown of two of the nation’s top talents. Virginia’s Laura Simon actually upset American record-holder Emma Reaney for the 200 title last year, and Simon returns in both races. But Louisville’s Andee Cottrell is a returning All-American who has already been faster in the 100 breast this year than she went in all of the 2015 postseason.

400 Free Relay – The marquee relay race appears to be the 400 free relay, one of just two relays Virginia lost last season. NC State, aiming to defend their 200 and 400 free relay ACC titles, has the fastest time in the conference this season by just three tenths of a second over Virginia, and both programs have been about as fast already as NC State went last year. Both teams have a host of swimmers capable of going mid-48 or faster, and the title will likely come down to a combination of which team selects its four best swimmers from the pack of contenders and if either team can find a stud to pull out a 47-second split. UNC should be a similarly deep contender, though with less candidates for that game-changing split. The dark horse is Duke, which holds the ACC’s 3rd-best time this year, but might have trouble filling out four legs as well as the top teams. And don’t count out Louisville, which will very likely get a 47-second-or-better split from Worrell.

200/400 Medley Relay – Virginia is the heavy favorite in both medleys, and might actually be the NCAA favorites, depending on how they swim at ACCs. But the intrigue comes in the matchup with Louisville – Worrell should put up a superhuman fly split, which is the only leg Virginia graduated from their winning relays in 2015. On top of that, Louisville only graduated its backstroker, but is actually better off using freshman Alina Kendzior instead of last year’s strategy of trying to fit in IMer Tanja Kylliainen as their backstroker. What makes the relay interesting is that Courtney Bartholomew will likely put up a crushing backstroke split for Virginia to counter Worrell’s insane fly leg. The breaststrokers (Simon and Cottrell) are very similar, potentially bringing things down to the anchor leg. Virginia has the decided advantage there with Worrell not able to swim freestyle, which adds one final wrinkle – if the freshman Comerford can throw down a big enough butterfly leg, Worrell could shift to freestyle, providing the threat of an anchor leg run-down. The Cavaliers are still the favorites here, but both medley relays should be fascinating chess matches between both coaches.

All-in-all, Virginia is too deep and too well-rounded to be anything but the prohibitive favorites in the meet, even with some low-level uncertainty about Kaitlyn Jones’s recovery from a broken hand (uncertainty pretty well stamped out based on some solid January performances from the junior in her comeback meet).

The Cavs are dominant in distance freestyle (Leah Smith), backstroke (Courtney Bartholomew) and breaststroke (Laura Simon), great in the IMs (Jones) and deep in fly and sprint free, with relay teams that could realistically sweep all five relay races. It appears awfully likely Virginia will be extending their streak to 9 years in

In a lot of ways, North Carolina is built the same way, only without the next-level talents like Smith, Bartholomew and Simon. The Tar Heels were only 50 points out of first place last year without winning a single event. They lose Danielle Siverling, who was a big point-scorer last year, but don’t expect that to cripple the deep Heels, who are still the best non-Virginia team in the conference in this format.

Things get interesting after that. Virginia Tech wound up third in a very impressive performance last year. The graduated two big divers, including conference champ Kalyea Arnett, but the bulk of their point-scorers in the pool appear back and better than ever. In hot pursuit is Louisville, which graduated IM champ Kylliainen but loaded up on blue-chip freshmen in recruiting and are probably better than last year’s record-setting team was. We’ll slot in Louisville in third on a combination of relay points on mind-bending Kelsi Worrell splits and the potential for greatness from freshmen Rachael Bradford-Feldman and Mallory Comerford.

NC State is getting more well-rounded and could still nab a few relay titles. It wouldn’t be surprising to see them getting in the thick of the Louisville-Virginia Tech battle for 3rd, but they’ve got some work to do on that front.

Notre Dame may struggle with the loss of Emma Reaney’s big points and relay splits after finishing 6th last year. They’re also a bit of an unknown commodity swimming in their first year under head coach Mike Litzinger, their third head coach in as many seasons. Florida State lost key sprinter Kaitlyn Dressel and 1-meter diving champ Katrina Young, though the Seminole program seems to rise like clockwork each year.

Contrast that with Duke, a team loaded with young talent, but one that found out last year how hard it is to develop enough depth to move up in the ACC – the Blue Devils had some great swims up top, but were still just 10th overall.

Another great recruiting class, this year’s freshman, should provide the necessary push to vault Duke ahead of teams like Pitt and Miami and into the hunt with FSU for 6th.

tech over ncsu? for sure no

0
0
Reply
VTFAN
Reply to  swimming yo

That’s what they said last year too….

UNC is not as deep as they were a year ago, and I see them having a major struggle beating very strong teams from Louisville and NC State.
1. Virginia
2. Louisville
3. NC State
4. UNC
5. VT

Keep the records for NCAAs.