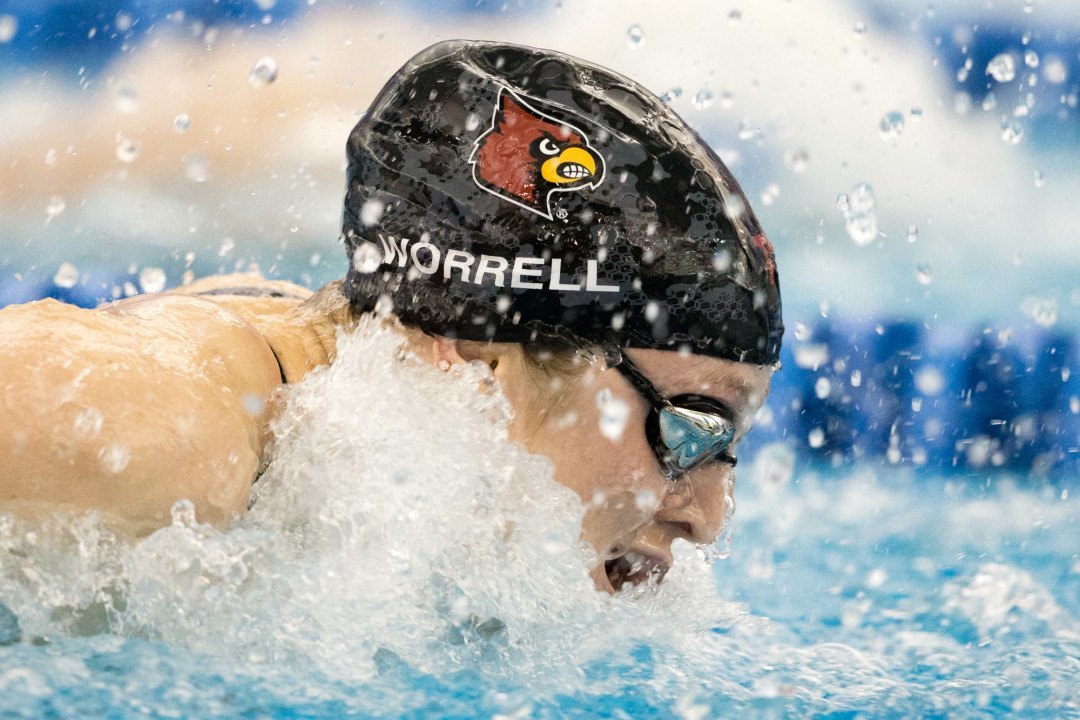 Kelsi Worrell hit the fourth-fastest 100 fly of all-time to start a three-event run of ACC Championships for Louisville on day 3. Current photo via Tim Binning/TheSwimPictures.com

Louisville senior Kelsi Worrell, the defending NCAA Champion and American Record holder in the 100 yard fly, has pegged another performance…

The NC State Wolfpack are making things interesting in Greensboro

Louisville is primed to make moves on day 3 of the ACC Women’s Championships, holding the top seed in 4 of 5 individual swimming events after prelims.

Of special note is senior Kelsi Worrell, last year’s NCAA champ and American record-holder in the 100 fly. She was 50.23 this morning, just four tenths off her national record.

Freshmen Mallory Comerford and Rachael Bradford-Feldman lead the 200 free and 400 IM, respectively. And junior Andee Cottrell is the top seed in the 100 breast, set up for a great showdown with Virginia’s Laura Simon.

The Cavaliers are leading the meet by a solid margin after two days, and have Courtney Bartholomew as the top seed in the 100 back. Bartholomew holds the ACC record and was just .04 seconds off an American record last season.

Keep refreshing this page for live, event-by-event updates from the ACC meet as they happen.

A broken hand threatened to derail Kaitlyn Jones’ junior season for Virginia, but after a full recovery, Jones came back to earn an ACC title in the 400 IM.

The fastest returner from last year, Jones went 4:06.66, almost an identical time to the one she went last year in taking second behind Louisville’s Tanja Kylliainen. Jones really rolled on backstroke, splitting 1:00.3 to build herself a comfortable lead, and was never really challenged from that point on.

Virginia Tech’s Klaudia Nazieblo was second, also doing most of her work on backstroke. Nazieblo’s 4:07.63 should safely earn her an NCAA invite, and procured big points for Virginia Tech as the H2Okies hope to rise from a rough 7th-place starting point after last night.

NC State’s Hannah Moore chared hard on the freestyle, outsplitting the field over the final 100 meters with a 55.8 split and coming within a hair of touching out Nazieblo. Moore was 4:07.64 for the Wolfpack.

Virginia also won the B final with Jenn Marrkand, and that helped push them to a 90-point lead over NC State, more than double the margin they had as of last night. Louisville is also charging on the Wolfpack, sitting just 31 points back with two more top-seeded swimmers to come in the next two events.

We should have seen this coming.  Despite a school record / statement-making swim from Hellen Moffitt in prelims, Kelsi Worrell went unabated in her effort to repeat as ACC champion, leveraging a blistering 26.42 second 50 to win the women’s 100 fly in 50.06.  That clipped her own ACC meet record of 50.17 from last season, and she now owns three of the four fastest swims in history. Her two sub-50-second swims from last year’s NCAAs are the top two, and tonight’s swim checks in at #4 just .05 behind the previous American record held by Natalie Coughlin.

Moffitt was just 51.15 for second after her 50.67 this morning, but held her second spot for UNC as the Tarheels look to get back into the team race.  Teammate Sarah Koucheki was eighth in 52.86.

From a team race perspective, Natalie Labonge of NC State (51.93 for third, smashing her own team record) and Ellen Thomas of UVA (52.57 for seventh) both jumped up a spot in the A-final, and the Wolfpack duo of Ashlyn Koletic and Krista Duffield put together critical swims to hold onto their 9th and 10th seeds from prelims.

Coming into this weekend, near-univeral consensus had Virginia’s Leah Smith as a triple winner individually this week, and rightfully so; she’s the defending ACC champion, meet record holder, and was top seed by a full second this morning.  Smith had a great swim tonight that would have won in any other ACC competition (1:42.97, under her old meet record).  Mallory Comerford of Louisville, however, was just a little bit better.

Getting out in front of the field early, Comerford was able to hold off Smith over the final 150 as Smith inched closer for the win in 1:42.79, a new Louisville team and ACC meet record.  This swim is another chapter for what has been a storybook season for Comerford, a true freshman who has now chopped five seconds off her best time so far this season.

UNC’s Allyn Hardesty went out with Smith and Comerford, flipping nearly even with the top two finishers at the 100 mark, but faded hard over the back-half of the race to finish fifth in 1:45.14.

Megan Moroney of Virginia was able to grab the Cavaliers another podium finish, touching just ahead of NC State’s Rachel Muller in their tight team battle, 1:44.90 to 1:45.13.  Muller’s teammate Michelle Craddock jumped up two spots to sixth with a 1:45.79, while Moroney’s training partner Hanne Borgersen fell to eighth in 1:46.38.

Virginia Tech’s Jessica Hespeler, the third seed from this morning after her new team record , fell to seventh in 1:46.01.

Andee Cottrell made it three in a row for the Louisville women, breaking the ACC conference and meet records with a 58.26. That’s a jump from last year’s third-place showing and ranks her second nationwide.

The only other swimmer under a minute was Virginia Tech’s Weronika Paluszek at 59.37. The H2Okies are getting some big production out of their top-end swimmers tonight as they fight for position in a deep ACC middle-tier of teams.

NC State’s Kayla Brumbaum just missed the first sub-minute swim of her career, going 1:00.11 for fourth place. That matches her prelims swim right down to the hundredth of a second.

Virginia ended the Louisville run in the 100 back, though, with stalwart Courtney Bartholomew going 50.74 to roll to a win and an ACC meet record. That’s only five one-hundredths off her NCAA-leading time from earlier this year. But don’t count Bartholomew’s ACC 100 backstroke run as over yet… she still has the 400 medley relay later tonight, and has historically performed her best in those relay swims.

NC State’s Alexia Zevnik took advantage of a tough double by UNC’s Hellen Moffitt, going 51.27 to move past Moffitt for second place. The Tar Heel was 51.62, about two tenths off her prelims swim only a half-hour or so after taking second in the 100 fly.

That started a three-deep run of Tar Heels, with Caroline Baldwin taking fourth (52.79) and Sarah Hitchens fifth (52.80). That big haul of points bumped UNC up to third place overall.

Virginia is still comfortably leading, though NC State lurks within 60 points behind. UNC still has 90 points to go to overtake their in-state rivals, with Louisville fourth.

Pittsburgh earned its first ACC title of the meet so far, with sophomore Meme Sharp scoring 360.00 points to beat out UNC’s Elisa Dawson (353.40) for the 3-meter title.

Virginia’s Rebecca Corbett was just two points behind in third place, with a pair of Notre Dame divers (Lindsey Streepey, Emma Gaboury) in fourth and fifth.

Virginia and Louisville capped off the night with a thriller of a 400 medley relay that came down to just seven one-hundredths of a second.

True to form, Courtney Bartholomew came up huge for the Cavaliers on the leadoff leg, going 50.55 in the 100 backstroke to best the time she used to win the individual ACC championship earlier in the night. That’s the fastest 100 back in the NCAA this year, topping her own midseason mark.

But Louisville roared back on the breast and fly legs, with the reigning ACC champions reprising their roles in both spots. Unfortunately, splits appear to be missing on the live results page, so we don’t know exactly how fast Andee Cottrell and Kelsi Worrell went, but it was enough to pull Louisville into nearly a dead tie with Virginia with 100 yards to go.

Virginia’s winning team also included a fast 58.53 breaststroke split from Laura Simon and a 51.69 on fly from 400 IM champ Kaitlyn Jones. Louisville got a 53.22 leadoff leg out of freshman Alina Kendzior.

NC State was solidly third, two seconds behind the leaders but four seconds up on fourth-place Virginia Tech. The Wolfpack had a great 47.54 split from Riki Bonnema on the anchor legto go 3:30.58 for the last automatic NCAA bid of the race.

The battle between Louisville and UNC continues for third – the Tar Heels finished just fifth in that relay, but still lead the Cards by 26. Virginia is up nearly 100 on NC State at the top as the top 4 programs have vastly outpaced the rest of the field with one day to go.

Worrell’s fly split was 49.5 per her video interview on Youtube.com,

It’s pretty insane how many women are going 58 in the 100 breast.

Wow, 50.06 with two pretty cruddy turns and an absurdly long finish? I’m pretty sure that Kelsi will smash her American record at NCAAs if she times the walls right!