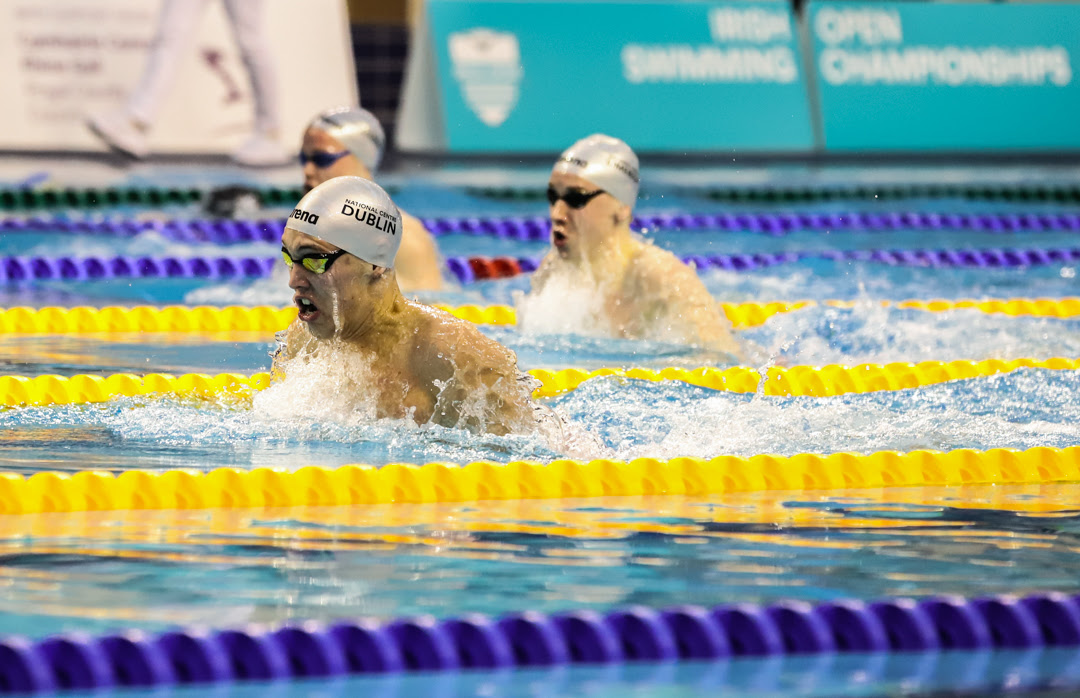 The time trials delivered some promising results across the board for Ireland's elite, with more edging closer to those all-important FINA 'A' cuts Archive photo via David Kiberd/Swim Ireland

Ireland’s elite have been racing behind closed doors in two time-trial events held in a number of performance centres across the country.

The ‘Identified Athlete Time Trials’, as the trials are being called, took place across two weekends in March and featured the likes of Brendan Hyland, Shane Ryan, Danielle Hill, Ellen Keane, Bethy Firth and Darragh Greene.

The University of Limerick and Craigavon Leisure Centre played host to the respective Munster-based and Ulster-based performance athletes on the weekend of March 12th -13th.

The National Aquatics Centre in Dublin then welcomed the athletes from each of the three provinces on March 19th-20th.

These trials happened less than one month before the National Aquatics Centre in Dublin is due to hold the Irish National Team Trials – the main qualifying opportunity for those vying for this summer’s Olympic and Paralympic Games.

That competition, which will take place from April 20th-24th, was previously slated as the Irish Open Swimming Championships. However, due to current restrictions in place as a result of the ongoing pandemic, the meet has been stripped back and will only be open for specific athletes.

During this leg, Shane Ryan clocked a time of 55.09 in the 100m backstroke during a prelims swim, touching out Larne swimmer Conor Ferguson in the process who came in second with a time of 55.43.

Elsewhere in the pool, Jack McMillan posted a time of 1:47.89 in the men’s 200m freestyle, less than a second away from his personal best of 1:47.10 which he set at the Irish Winter Meet in December last year.

That PB sits just .08 away from the FINA ‘A’ cut needed to qualify for the rescheduled Games. McMillan also posted a 49.23 in the men’s 100m free while in action in Dublin.

Multiple national record-holder Danielle Hill delivered a time of 1:01.18 in the 100m backstroke, an event where she is just 0.65 away from the time needed in order to secure a spot in Tokyo (1:00.25).

Darragh Green posted a time of 2:12.96 in the men’s 200m backstroke, while his National Centre Dublin teammate Brendan Hyland posted 53.62 in the 100m butterfly.

Paralympic gold medallist for Team GB Bethy Firth was in action during the Craigavon time trial, coming in an 31.45 in the 50m backstroke and 36.77 in the 50m breaststroke.

21-year-old Jack McMillan stopped the clock in 23.15 in the men’s 50m freestyle, while his Bangor teammates David Thompson and Curtis Coulter posted 23.81 and 24.08, respectively.

He said: “To be able to run a time trial event such as this as we head into our National Team Trials was a very welcome bonus, particularly as our athletes have not experienced international preparation competition for over a year now.

“Head-to-head racing under one roof for those who aspire to represent Ireland in international competition this summer was very well received and the results from this event are certainly encouraging.

“Once our overseas athletes return to these shores for our Trials, we will have an enhanced depth in the majority of the events and this will add something more to the racing stimulus.

“There is not much more we could have done over recent months for our Performance contingent, and we can all look forward to some exciting racing in Dublin from the 20th April.”

Ben Higson, who is the National Senior Team Head Coach and Head Coach of the National Centre, Dublin, commented: “Over the last two weekends, the racing series has provided opportunities for our performance athletes to refine and repeat race strategies in a head-to-head format.

“There were some extremely encouraging swims and with exactly 4 weeks to go until our National Team Trials athletes should be excited about the opportunity to race at peak performance & challenge for spots on the summer teams.”

Encouraging was not the Irish football team that hosted Luxembourg and lost 0-1.

They came back with a draw against *Qatar* though!!!!

The Irish Rugby team was pretty encouraging against England, winning 32-18. And we all got to see Owen Farrell sad face, which is always fun.