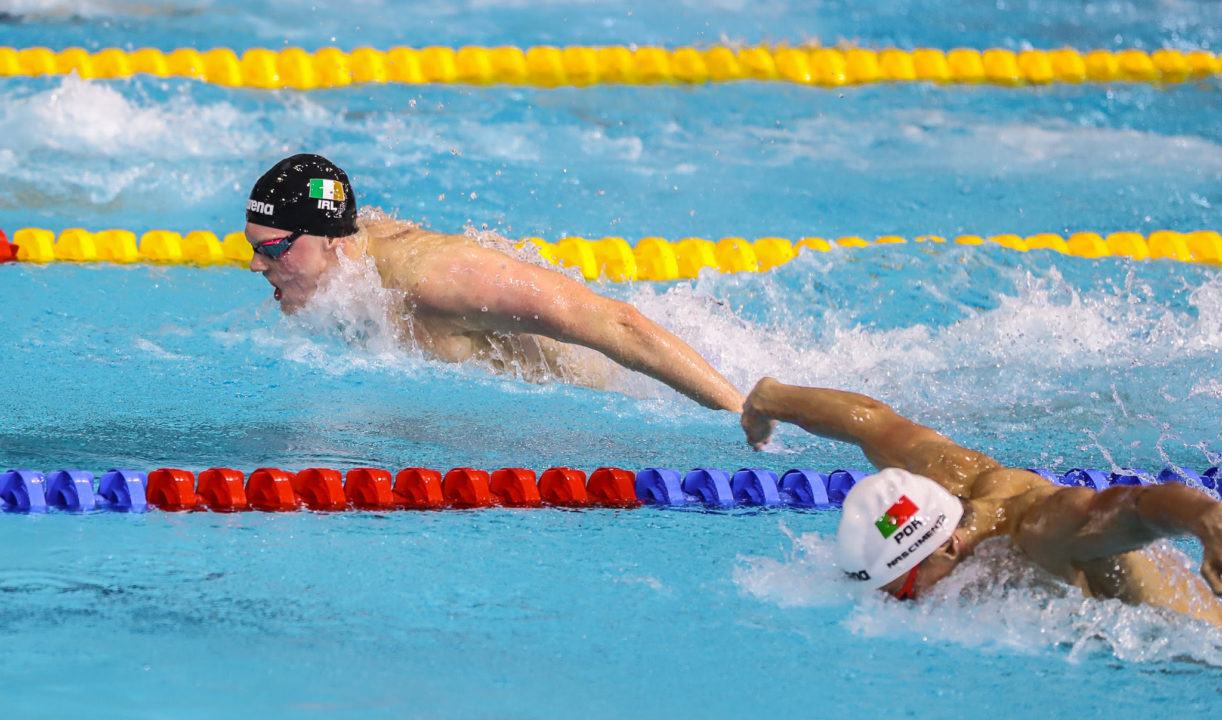 The competition will now act solely as a qualifying opportunity for those vying for this summer’s Olympic and Paralympic Games in Tokyo, Japan.

The action will run from April 20th-24th at the National Aquatic Centre in Dublin. This event, which will be Ireland’s first competition in 2021, will give athletes a chance to qualify for the following meets:

There will, in theory, be a few final qualifying opportunities after this meet, for Tokyo at least, though details of those events haven’t yet been announced.

The meet will be open for specific athletes which Swim Ireland has outlined as being “Performance athletes currently training in recognised onshore training bubbles in National Centre Dublin, National Centre Limerick and at Bangor Aurora, as well as those identified athletes of similar standing who are living and training offshore.”

This approach is similar to what we’ve seen countries such as Canada do; their Olympic and Paralympic trials will be running as timed-finals with a maximum of 20 athletes per event. However, unlike the Canadian trials, athletes for this Irish event are being hand-chosen rather than being based on specific national ranking.

Limiting the number of athletes per event contributes to an overarching effort by organisers to reduce the amount of personnel at the competition amidst the coronavirus pandemic.

Shane Ryan and Darragh Greene will be two of the athletes in action at the competition, both of whom have been pre-selected for the Olympic Games as per Swim Ireland‘s revised selection policy.

Greene clocked his time in the 100m breast, touching in 59.82 at the 2019 FINA World Championships. His teammate and former USA national teamer recorded a time of 53.73 in the 100m backstroke at the 2019 Irish Open.

Butterfly ace Brendan Hyland will also be attempting to secure his spot on the plane to Tokyo and currently sits a mere 0.07 off the 200m butterfly qualifying standard of 1:56.48.

Hyland said of the meet: “The addition of semi-finals gives us an extra chance to perform at our best and ultimately my aim is to nail the 200m Butterfly time at the start of the meet. That’s always been the plan for a long time now.”

Swim Ireland National Performance Director, Jon Rudd, commented: “As we continue to deal with the challenge that COVID presents us, we felt that it was important to provide athletes with the best possible opportunity to qualify for the Olympic & Paralympic Games and/or for other Irish National Teams this summer, whilst recognising that a lot of the athletes that would normally partake in this competition will not feature as they have not been able to train and prepare for a number of weeks.”

“The event will be live-streamed, and our swimming community will be able to join us each day to cheer on those looking to represent their nation this summer and we believe that the balance that this gives us in April is one which will be fully understood and supported by those involved in Irish swimming”, he said.

Rudd added: “For those who are not able to train right now, please remain patient, as your day will come.”

Heading into the meet

This meet is the first since December of last year when the 2020 Irish Winter Meet was contested at the same venue. Similar to the upcoming event in April, restrictions – as a result of the pandemic – disallowed large numbers of athletes from taking part.

Another swimmer vying for Olympic glory is Larne’s Danielle Hill, who is expected to be racing at the event in two months’ time. The multiple national record holder has the 100m backstroke record under her belt with a time of 1:00.90 she posted at last year’s Dave McCullagh International Open Meet.

That time is within reaching distance of the FINA A standard of 1:00.25.

The athletes racing in April will have solid training blocks behind them after being categorised as ‘elite’ by the Irish Government and allowed to return to training during the initial lockdown last summer.