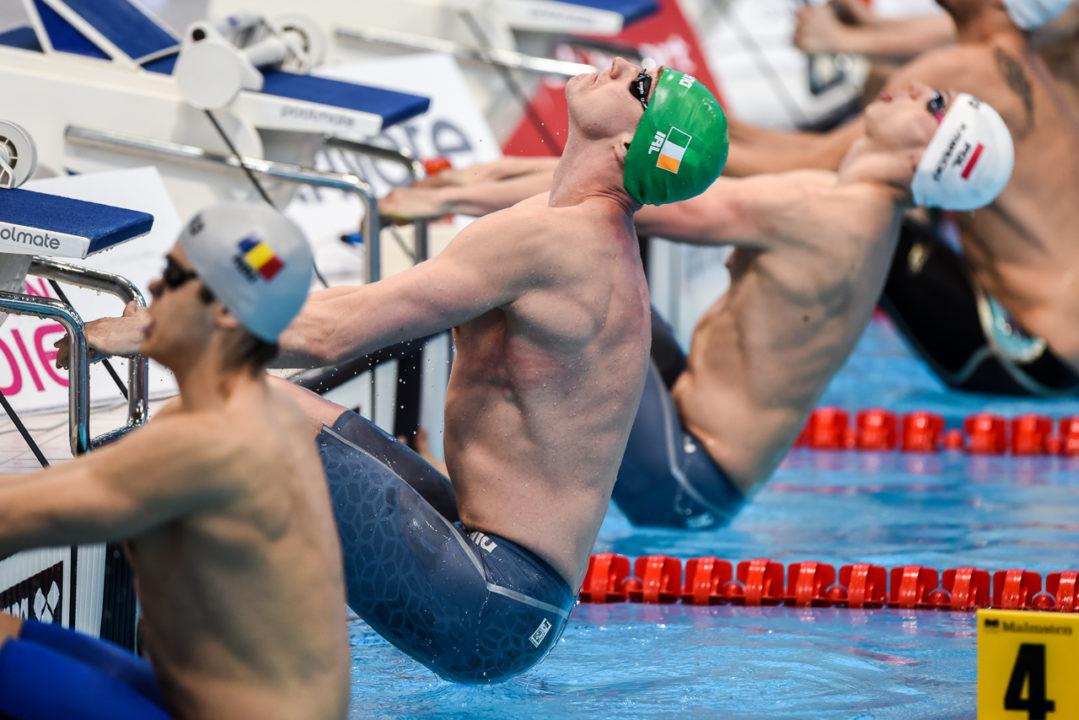 Get ready, as the first nation's Olympic Trials entry lists have been posted. Check out Ireland's line-up for its Championships set for April. Archive photo via Peter Sukenik/www.petersukenik.com

The initial psych sheets for the 2020 Irish Swimming Championships have been released, which means we’re getting a first glance at which events the nation’s biggest stars will most likely be taking on come April.

You can review our analysis of the Irish Selection Policy for the 2020 Olympic Games linked above, but it essentially boils down to swimmers needing to meet or exceed one or more of the selection times competing in the heats, semi-finals or finals of this Irish Open. Those times appear in Table 1 at the bottom of this post and equal the FINA ‘A’ Olympic qualifying times.

However, there is also a pre-validation process in play for just one swimmer, Darragh Greene. 24-year-old Greene achieved one of the aforementioned Table 1 times at the 2019 FINA World Championships, clocking a heats swim of 59.82 in the men’s 100m breaststroke.

Per the selection policy for Tokyo, as long as Greene hits a time of 1:00.83 from Table 2 at these Irish Open Championships, the man will book his ticket for this summer’s Olympic Games in the 1breast.

Ireland saw 3 swimmers compete in Rio, with Shane Ryan advancing to finish 16th place in the men’s 100m backstroke event. Nicholas Quinn and Fiona Doyle were the other Irish swimmers competing at the 2016 Olympic Games.

Ryan is entered in the 100m free, 100m backstroke and 100m fly events, with his most likely-to-qualify event coming in the 1back. Ryan owns the Irish national record with a mark of 53.73 from the 2019 edition of the Irish Championships. He’ll need to be near that effort in Dublin, as the FINA ‘A’ cut rests at a 53.85 threshold.

In Gwangju, Ryan posted a heats swim of 54.24 to render himself in 21st place, but was the bronze medalist in the 50m back event.

Quinn is also entered in these Irish Open Championships, representing the top-seeded swimmer in the 200m breast with his lifetime best of 2:11.77. He’ll need to bring that way down to a 2:10.35 minimum to earn a bid for Tokyo, but he’s giving himself a shot in the 100m breast sprint as well.

That time for Hill sits just over half a second away from the FINA A cut of 1:00.25, giving her a goal within reach for these Irish Championships.