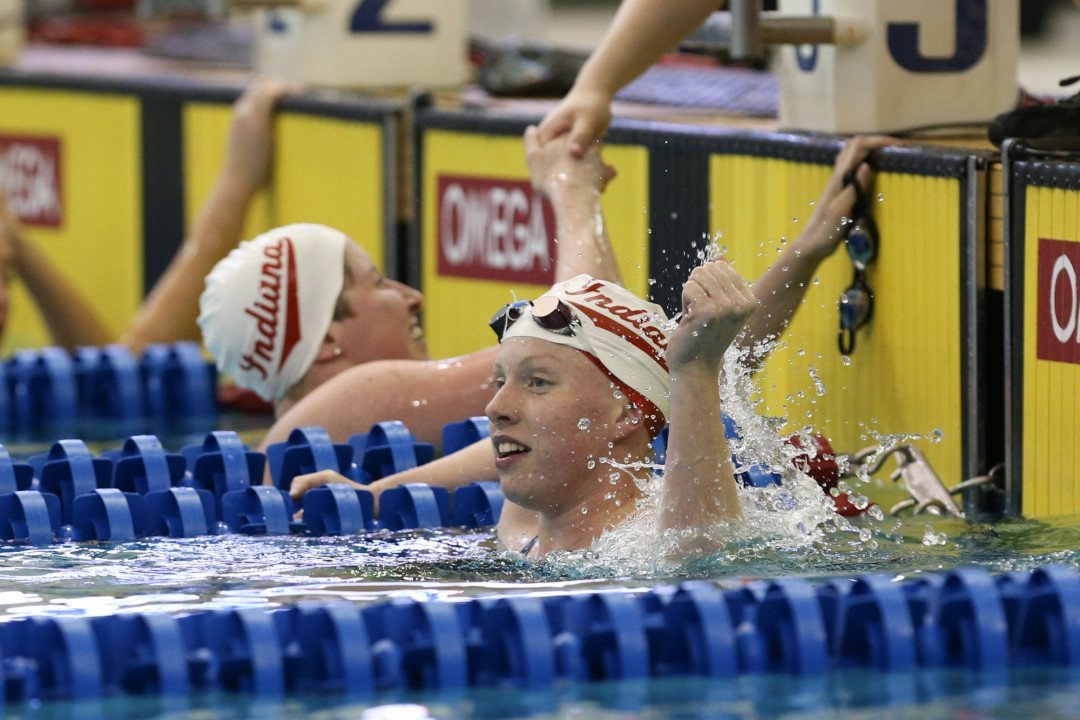 The Hoosier men started off on a high note, with the 200 medley relay team of Bob Glover, Ian Finnerty, Vini Lanza and Ali Khalafalla winning with a time of 1:27.99. The IU women took second place in the event, with the team of Ali Rockett, Lilly King, Gia Dalesandro and Gabriela Rajic touching in a time of 1:41.46.

For the men in the 1000 freestyle, Marwan Elkamash took second place with a time of 9:08.37, while Jackson Miller was right behind him in third in 9:14.56. Adam Destrampe was fourth overall with a mark of 9:16.56. Elkamash’s time ranks him as the seventh-fastest performer in the event in IU history.

In the 100 backstroke, Glover won the event for the Hoosier men with a time of 48.83, while Rockett led the IU women’s effort, placing fifth with a mark of 56.04.

King was back to her winning ways in the 100 breaststroke for the Indiana women, touching the wall in a NCAA B cut time of 1:02.13. For the Hoosier men, Finnerty placed second with a time of 55.59, while Levi Brock took fifth in 57.31.

The Hoosiers showed their strength in the men’s 50 freestyle, with Khalafalla winning in a NCAA B cut time of 19.91. Tavcar was third with a time of 20.43, while Sam Lorentz placed fifth in 20.55. For the IU women, Rockett was fifth overall with a time of 24.16.

In the men’s 1-meter dive, the Hoosiers were dominant. Michael Hixon took first with a score of 404.45, while James Connor was second with a total of 394.30. Joshua Arndt was third with 333.55, while Cody Coldren took sixth with a mark of 284.90. Hixon, Connor and Arndt all posted NCAA qualifying scores in the event.

In the women’s 3-meter dive, Michal Bower won with a score of 342.15, while Jessica Parratto took second with a total of 293.80. Taylor Pamplin was fourth overall with a score of 266.35. Both Bower and Parratto notched NCAA qualifying scores with their marks.

Once again, the IU men’s sprinters overwhelmed the competition in the 100 freestyle, taking the top-three spots. Pieroni led the charge, touching first in a NCAA B cut time of 43.89. Tavcar was second in 44.30, while Khalafalla was third in 45.02.

King, the reigning NCAA Champion in the event, won the 200 breaststroke with a NCAA B cut time of 2:14.25. For the men, freshman Jack Kucharczyk touched the wall second with a time of 2:04.62.

The Hoosier men had three swimmers in the top-five of the 100 butterfly, with Lanza touching first with a NCAA B cut time of 48.07. Pieroni was third in 48.58, while Irwin placed fourth with a mark of 49.02. On the women’s side, Dalesandro led the way, coming in third with a time of 54.64.

The Indiana divers were again dominant in the men’s 3-meter dive, with Connor winning with a score of 394.20. Arndt was third with a total of 372.75, while Hixon was fifth with a mark of 340.35. Coldren was sixth overall with a score of 327.30. All four IU divers recorded NCAA qualifying scores in the event.

For the IU women divers on the 1-meter, Bower led the way in second place with a total of 287.00, while Parratto was third with 285.10. Pamplin was fourth overall with a mark of 278.25, as all three recorded NCAA qualifying scores.

The Hoosier men put an exclamation point on their day, as the 400 freestyle relay team of Khalafalla, Pieroni, Tavcar and Lorentz won with a time of 2:57.11.

For the women, the 400 freestyle relay team of Rajic, Shelby Koontz, Holly Spears and Goss finished fourth with a time of 3:28.15.

The Indiana men’s and women’s swimming and diving teams will be back in action on Friday, Nov. 11 when the teams host Michigan State for a dual meet at the Counsilman-Billingsley Aquatic Center. The meet is scheduled to start at 1:00 p.m. ET.

“We handled the challenge reasonably well, but one thing we did not improve on is winning the close races,” Tennessee head coach Matt Kredich said. “We keep getting touched out at the wall, and we will work to improve on that. We put the team to the test with these two meets, and they did well. There was no complaining, no excuses.”

Sophomore Madeline Banic recorded her first two-win meet of the season, leading the charge 1-2-3-4 Tennessee finish in the 50-yard freestyle (23.45 seconds) and also scoring a victory in the 100 butterfly (54.26).

Tennessee won both women’s relays, taking first and second in the 400 freestyle relay to end the meet. Senior Heather Lundstrom won the 200 butterfly in 1:59.36, her third swim under two minutes this season. Lundstrom was also second behind Banic in the 100 butterfly.

Including his three wins Thursday against Louisville, McHugh wrapped up the week with four victories. On Friday, he was also second in the 500 freestyle (4:25.96) and third in the 200 butterfly (1:47.07).

INSIDE DIVING: The swimming pool was full of Olympians and medalists, and so was the diving well. The diving competition alone featured four NCAA champions, three Olympians and an Olympic silver medalist.

Junior Liam Stone was fifth in the early-morning 1-meter competition with a score of 320.70. He rebounded on the 3-meter springboard with a second-place finish in 377.75.

“In the early session, we took our lumps, but we regrouped,” Tennessee diving coach Dave Parrington said. “In the second event of the day, the scores did not always show it, but we were much more aggressive, and I was pleased with the way we competed. Liam was slow out of the gates his first two dives on 3 meter but finished strong.

“It was a tough first event on the road and it showed. These meets show what we need to work on going forward.”

“We’ve been a little banged up lately , so it will be nice to have one competition a week the next few weeks,” Kredich said. “It will give us a chance to heal up and hopefully have a full squad to get ready for Auburn.”

LEXINGTON, Ky. – The No. 18/21 Kentucky swimming and diving teams hosted No. 1/13 Indiana and Southeastern Conference foe No. 13/11 Tennessee in a double dual on Friday afternoon inside Lancaster Aquatic Center. The men recorded their second SEC dual win of the season, tallying a 167-143 victory over the 13th-ranked Volunteers, while the women fell to Tennessee in a 155-145 decision. Both squads fell to the Hoosiers, as the men were defeated 195-105, and the women 169-131.

“It was great day here in Lancaster Aquatic Center with the guys coming up victorious over the Tennessee program,” said head coach Lars Jorgensen. “It’s a significant win for our guys, and really across the board it was outstanding.”

The Wildcats combined for five first-place finishes and six NCAA B standard times on the day. Freshman Asia Seidt was the only UK swimmer to turn in two B cuts in the meet with her second-place time of 53:72 in the 100 backstroke event, and first-place finish of 2:00.21 in the 200 individual medley.

Senior Kyle Higgins turned in his third top finish in the 200-yard butterfly this year, coming in at 1:45.50. His time in the event was his second best this year, as he currently holds the No. 2 time among Division I swimmers in the event from his 1:45.37 finish at Auburn on Oct. 12. Higgins also came in second in the 100 fly, narrowly missing the B standard by nine-hundredths of a second with his 48.38 performance.

“I was really proud of how the team performed. We’ve come a long way since my freshman year,” said Higgins. “I’m also proud of how I swam. It felt good to put up a time that was very close to my fastest time this season. Going forward, I just need to keep working on those little things as we go into the Ohio State meet.”

Walker Thaning also touched in first in the 200 backstroke with a time of 1:46.97. His second first-place time in the event this season, he barely missed the B standard of 1:46.39. Thaning also turned in top-three finishes, finishing second in the 100 backstroke and contributing to a third-place finish in the 200 medley relay.

Andrew Aviotti also recorded a top finish for the men, posting a 9:07.71 in the 1000-yard freestyle race.

Senior diver Becca Hamperian continued to shine on the springboards, placing first in the 1-meter event with 299.10 points, and third in the 3-meter with a 290.70 tally. Hamperian only missed second place by 3.1 points in the 3-meter, finishing behind Indiana’s Michal Bower (342.15) and Jessica Parato (293.80).

Defending NCAA Champion in the 200 backstroke, senior Danielle Galyer touched the wall with a B cut time of 1:57.52 for first place in the race. Bridgette Alexander also recorded a B standard in the event with a 1:58.37, good for third place.

Senior Kendra Crew turned in two stellar breaststroke performances on the day, finishing second in the 200 and third in the 100. Her 2:15.71 finish in the 200-yard event is good for NCAA consideration, as she followed closely behind Olympic gold-medalist Lilly King, who finished with a time of 2:14.25 for Indiana.

“I’m happy my swims were consistent,” said Crew. “My times were a little faster at Auburn, but consistency is still good. I also am really happy with how we’re coming together as a team. We had some great energy today.”

The Wildcats will stay home for their next meet, as they host a quad meet against SEC opponent Missouri, Northwestern and Southern Illinois. The meet will run from Nov. 4-5, with events beginning at 5 p.m. Friday and 10 a.m. Saturday. The Missouri men’s and women’s squads each earned top-20 rankings in this week’s CSCAA, coming in at No. 20/17, respectively.

Noticeably absent for IN, – Brooklyn Snodgrass, isn’t she back this year???