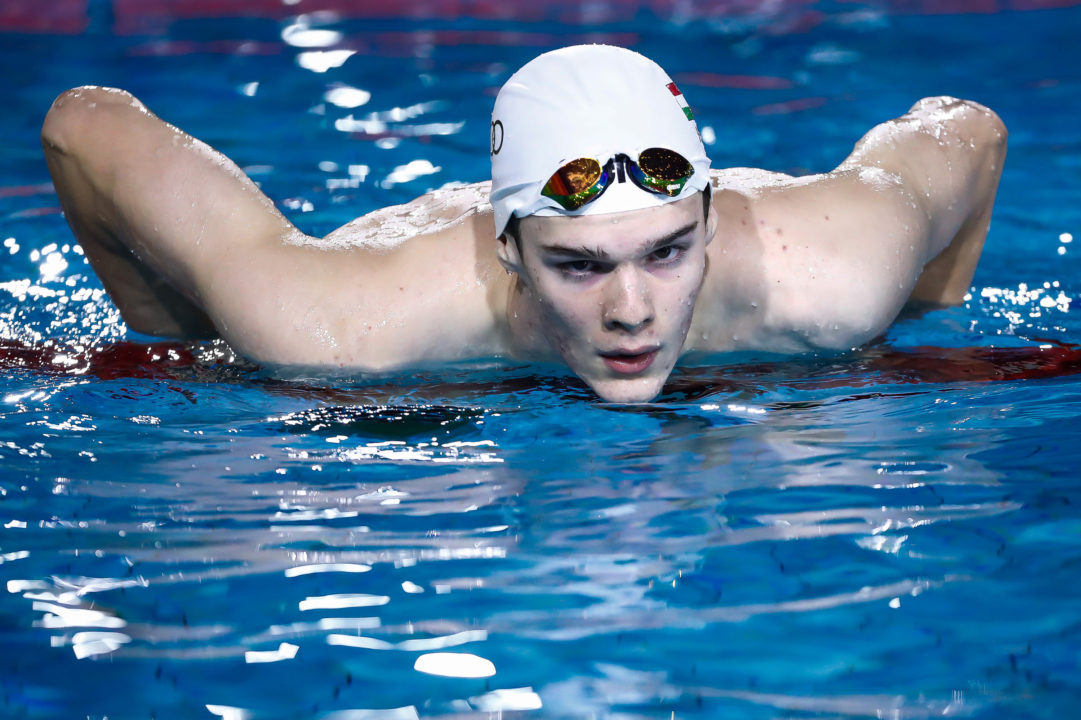 While competing on day two of the 2022 Hungarian Short Course Championships, Hubert Kos fired off a new national record in the men's 100m IM. Archive photo via Istvan Derencsenyi

While competing on day two of the 2022 Hungarian Short Course Championships, Hubert Kos fired off a new national record in the men’s 100m IM.

Kos got to the wall in a new lifetime best of 52.82 to take the gold, beating out runner-up Adam Telegdy by more than one second. Telegdy settled for silver tonight in 53.88 while Gabor Zambori rounded out the top 3 in a mark of 54.11.

In doing so, Kos obliterated his own previous personal best of 54.11 from this year’s FINA World Cup stop in Berlin. He also outperformed the previous Hungarian standard of 53.00 David Foldhazi put on the books 5 years ago.

Kos’ 52.82 100m IM performance was put up not long after he already snagged silver in the 100m back earlier in the session. Finishing in a time of 51.81 behind winner Richard Bohus gold medal-worthy time of 51.32, Kos’ 100m back result also checked in as a new lifetime best.

For Kos, who now trains under storied coach Bob Bowman at Arizona State University along with the likes of Chase Kalisz, Leon Marchand and Jay Litherland, this performance represents his first national record.

After the 100m IM race, 19-year-old Kos stated, “I am very happy with this swim, especially in light of the fact that half an hour earlier I had already done the 100 backstroke, where I improved my personal best by four seconds.”

“I have been to the World Cups and gradually got better at them. I feel like I needed these races now to have this kind of experience, and then when I go out to (Bob) Bowman’s in three weeks, then the really serious work will start anyway.”