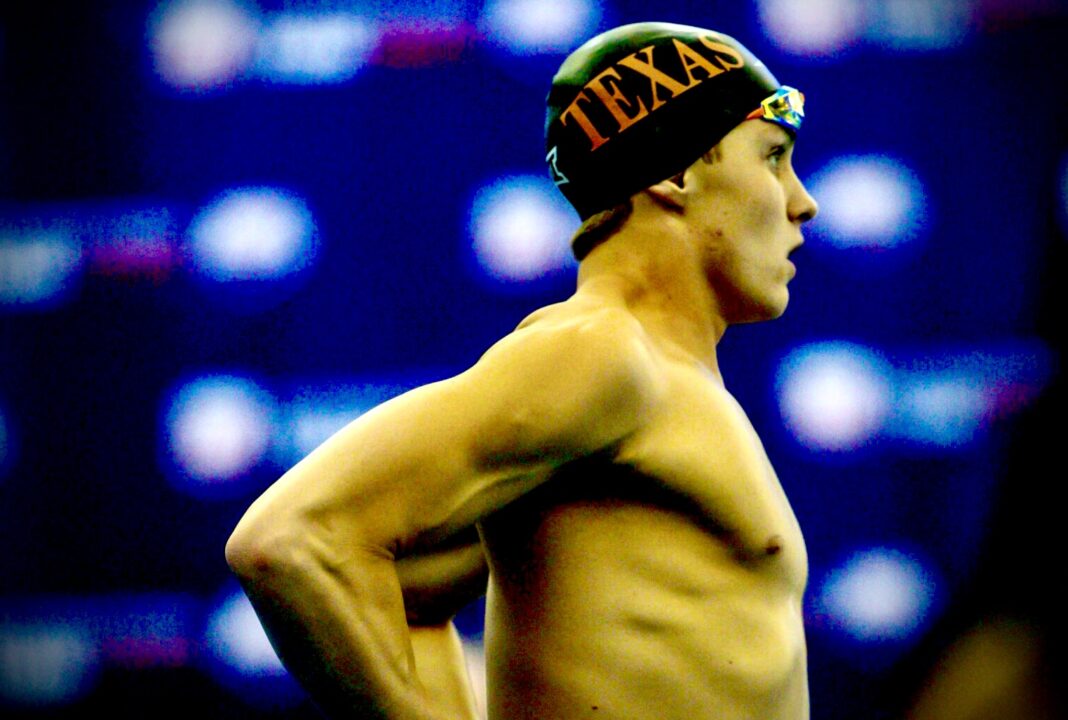 The Texas Longhorns have taken over the No. 1 spot for both men and women in the November edition of the CSCAA dual meet rankings Archive photo via Jack Spitser/Spitser Photography

The Texas Longhorns have taken over the No. 1 spot for both men and women in the November edition of the College Swimming and Diving Coaches Association of America (CSCAA) dual meet rankings, a change at the top compared to the initial rankings released in October.

The reigning national champion Cal men and Virginia women were ranked first last month, but Texas has taken over the top spot on both sides as a result of some recent dual meet results.

The CSCAA has the Longhorn women leapfrogging the Cavaliers after beating them head-to-head in a dual meet earlier this month, though UVA had a critical relay disqualification that impacted the final score. Had the DQ not happened, the Cavs would’ve won the meet.

The rankings also don’t factor in the results of a dual meet the previous day which was scored combined with the men’s teams.

Unlike SwimSwam’s Power Rankings, the CSCAA does not factor in how a team might fare in a championship meet format, exclusively looking at dual meet strength, and held firm in honoring certain head-to-head results. Voters were instructed to put the Texas women ahead of the Virginia women, for example.

On the men’s side, Texas has outperformed Cal thus far, though the Bears have yet to really show their hand with any suited swims. The two squads will go head-to-head in two weeks’ time at the highly-anticipated Minnesota Invite.

The most notable change for the men comes for Georgia, who jump up from seventh to fourth after earning an upset win over Florida in late October. However, the rankings don’t take into account the fact that the Bulldogs’ top swimmer, Luca Urlando, is now out for the season. Voters were instructed to honor the result of that meet in their power rankings ballots.

The USC women moved up three spots into fifth, following up an impressive performance at the USC Invitational in mid-October with resounding wins over Utah, ASU and Arizona.

Georgia was clearly the biggest mover in the top 10 on the men’s side, while Stanford slides three spots from sixth to ninth, having only contested one dual meet so far this season (199-97 win over Utah).

20 of the 25 teams ranked in the top 25 were on all ballots for both men and women, and a total of 32 teams received votes on both sides.

Each Division I committee includes representatives from each Power Five conference, along with seven at-large voters from mid-major programs. You can find the full lists below:

You can find the full CSCAA release here.

What’s the reasoning for not taking Urlando’s injury into account?

It’s not that deep

Funny how SwimSwam will do everything but give credit to the Texas women lol they really don’t wanna see them on top…where was the article when #2 upset #1?

1. Not saying this equates to an article, but we did tweet about the win and say that the Texas women showed their runner up finish at NCAAs wasn’t a fluke.
2. We pointed out that Texas gave Virginia their first dual meet loss in three years multiple times (in my live recap, in the weekly college swim recap, in our video dual meet recap, etc)
3. Yes it’s an “upset”, but there were so many factors that played into the win such as the two relay DQs, and almost all the sprinting events not being contested. You can’t deny that all of this gave Texas a leg up whereas in a traditional dual meet format this may… Read more »

It’s shocking to me that someone so invested in the Texas women’s team would actually pretend like we didn’t cover that meet. In fact, we probably covered that meet more than any other dual meet, ever.

27
-6
Reply
lefthandup
Reply to  Love to see it

Gurl if you’re this triggered by this article…just stop reading about your team.

Weird that the Texas women beg for attention and then keep getting mad when they get that attention. Just chill, keep training, and see what happens in March.

(Also, I have no dog in this fight – but Virginia is definitely going to win the NCAA title lol).

And it will stay that way.

Nope. Definitely not on the Women’s side.

Until it doesn’t. Such is the way of the world.