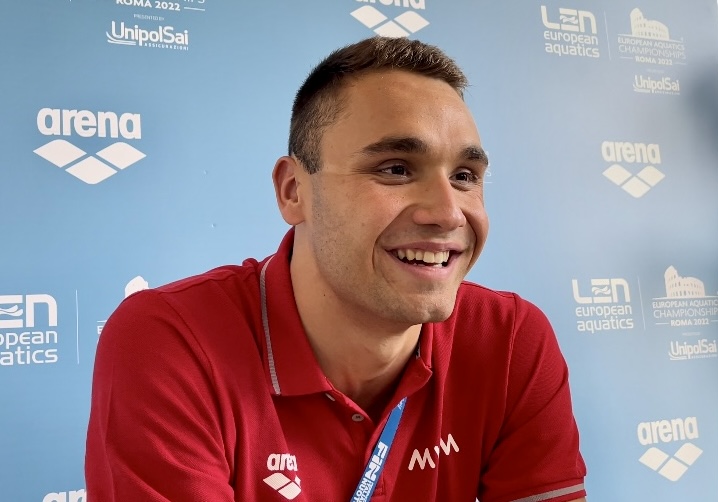 We reported on 19-year-old Kos’ new national record in the men’s 100m IM, where the Bob Bowman-trained teen put up a lifetime best of 52.82.

Earlier in the session Kos also snagged silver in the men’s 100m back, posting a time of 51.81. That got to the wall about half a second behind Richard Bohus who grabbed gold in 51.32.

29-year-old Bohus gave a nod to his own longevity post-race, saying, “It’s a good feeling that you’re still going, even so, with quite a few extra kilos, and at such an age… Well, now I’m the grandfather among the swimmers, but I really enjoy being here and that I can still hold the competition with the young people.”

The silver medal went to Richard Marton who touched in 1:51.10, whom Milak credits with helping him score such a quick effort this evening.

“I counted on [Marton] not to give up, that’s why the times were so good, we brought out the best in each other. I knew that he would come in the second 100, he is very good at that.

“I went at my own pace, I swam my own race, I’m glad it turned out that way. Actually, it goes like this, he beats me in training and I beat him in the competition. That’s why I like it that way,” said Milak.

Last night Milak won the men’s 100m freestyle, logging a new lifetime best of 46.72 and he was also in the 50m free this evening.

The women’s 50m free saw Petra Senanszky get the job done in 24.56 as the only racer under the 25-second barrier. Her time tonight came within .26 of her own national record of 24.30, a time she produced last year.

Gerda Szilagyi was the fastest woman in the 100m back, producing a winning effort of 59.42. She narrowly kept runner-up Dora Molnar at bay, with 16-year-old Molnar closing fast to touch in 59.49. Lora Komoroczy was also in the mix, earning a time of 59.84.

(Most of ) Hungarian swimmers are not good at turns, sprint events and (nowadays) breaststroke. For a long period of time Hungary did not even participate in SC international championships, only a few smimmers took it seriously. He has a 53.11 from 2012, NR at that time. I checked ESC Ch. results from that year. That would have been enough for 5th place only.

He tried a lot, but the best time was 53,11 by Cseh. But he liked 400 medley & 200 fly in short course as well, so its no a surprise. The best 100 medley swimmers are rarely the best medley swimmers. Nearly Katinka is the only one, who had above average 100 time. Which is the World Record…, but she had an insane underwater and turns during the Tusup times.

He tried a lot, but the best time was 53,11 by Cseh. But he liked 400 medley & 200 fly in short course as well, so its no a surprise. The best 100 medley swimmers are rarely the best medley swimmers. Nearly Katinka is the only one, who had above average 100 time. Which is the World Record…, but she had an insane underwater and turns during the Tusup times.

I am impressed with his 50 time!

Is he coming to the Worlds in Dec.?

No, only Szebastián Szabó and Zsuzsanna Jakabos.

Zsu in nonsense, she is washed-up and in a terrible from. While Szabó’s form is getting better.

And all-around I dont know how the hell Hungary wants a proper SC results in 2024, when Hungary will be the host of the SC Worlds.

Well, the reason is money. Hungary’s swimming cannot afford the travel costs to Australia. For both mentioned swimmers FINA will pay otherwise Hungary would have skipped short course worlds completely.