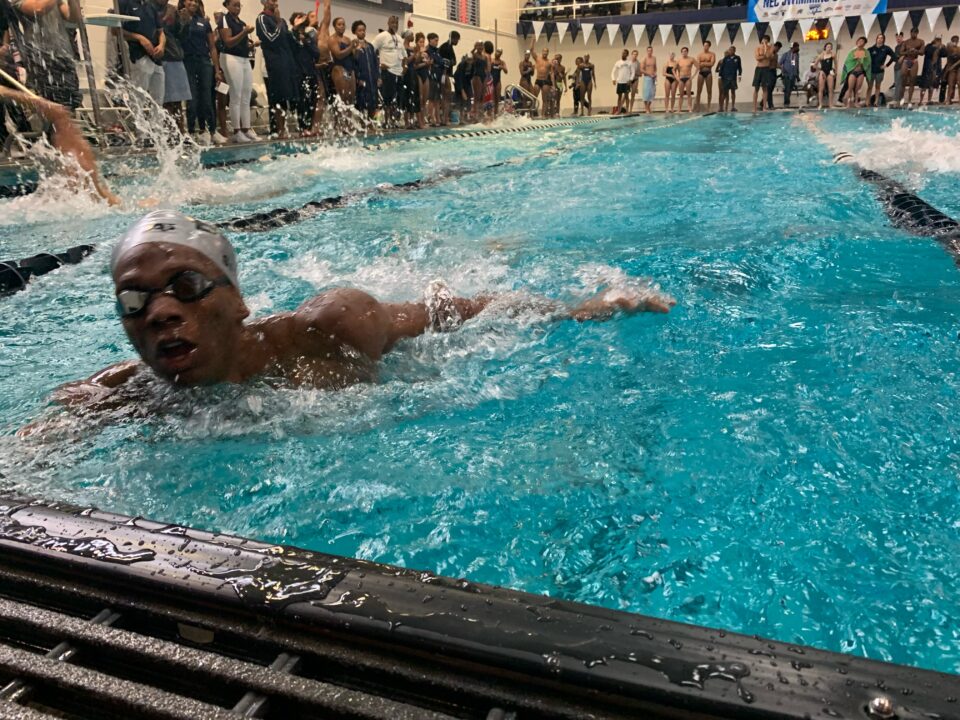 Howard head coach Nicholas Askew estimated the crowd at 1,200 for its dual meet against Georgetown, likely the most in school history. Current photo via Angela Sakell

Battle at the Burr: Howard vs. Georgetown

Once the swimmers set on the blocks, the crowd was quiet. Silent. Just the announcer saying, “Take your mark.” But when the race started, the crowd boomed. Shouts and squeals bounced off the walls and washed back across the pool, then got louder and louder. The DJ cranked up the music steadily. Fans could feel the bass in their bellies. At the end of the race — each race — the 500 fans ringing the Burr Gym Pool roared.

And if the home team won, the whole damn place erupted.

Howard University hosted Georgetown University on Saturday in the “Battle at The Burr,” the first dual meet of the season. Howard, the only HBCU with a swimming and diving program, sold out with 2,000 tickets for a dual meet — in October. The street in front of the gym was closed to traffic. Howard head coach Nicholas Askew estimated the crowd at 1,200, likely the most in school history.

But Saturday, the voices overwhelmed the music in the standing room-only crowd, which included a VIP section. When Howard took first and second in the men’s 200-yard medley relay early in the meet, the fans screamed with joy. When Howard closed the meet with a win in the men’s 200 freestyle relay, poolside DJ Alan Collymore kept the music pumping. The place was rollicking as the teams swayed and cheered for each other. The meet had morphed into a party, featuring a dance troupe that managed to successfully perform without slipping.

“We knew it was gonna be a tough battle, but we knew we had a chance,” Askew said. “I think that’s the mentality with our program moving forward is… if we have a lane, we have a chance.”

Askew wants to build a program by building a crowd.

“The things that people really gravitate towards that excitement, that energy, that’s where the inspiration comes from, you know, as a spectator, as a swimmer,” Askew said.

Throughout the meet, Askew was everywhere: presenting an award, unveiling a championship banner in the rafters, directing the deck crew to sweep between raises, helping remove the diving board, giving a mid-meet TV interview in the hallway. He’s used to being busy; he’s also the tennis coach.

“That’s normal,” he said. “We build our program on, ‘Do it yourself.’ We can’t wait for someone else to do something. And if we see something needs to get done, then we do it.”

On Friday night, Askew was inducted into Howard University Athletics Hall of Fame. As a Howard undergraduate (’00), he swam and played tennis.

“It’s very humbling,” he said. “I’m grateful because so many people took the time, effort and energy to do that for me, and I want to be able to reciprocate that to people that have opportunities to come across.”

Standing next to the blocks before her start in the 200 IM, Georgetown senior Samantha Kim was windmilling her arms to the beat with the DJ.

“It’s so much fun to have the music going with all the friends on this side,” Kim said. “It doesn’t feel real, like you’re sort of just living in the moment. This is unlike any other meet I’ve ever been to.”

“It was immaculate, like, our dual meets are usually not hype,” Simon said. “But this was like our regular dual meets times 10. Just the people in the crowd, the music. We had a whole dance crew come out here.”

“It’s pressure but it’s good pressure,” Simon added. “You know, I’m more motivated having this many people in the crowd and I’m excited to swim because of that.”

Whoever heard of a DJ in a swim meet? There were two, in fact, with another DJ in the basketball gym with enormous TV screens to accommodate the overflow crowd.

And why isn’t there a DJ at every meet?

Big shoutout to our Howard favorites Arion Solomon, Kali Garcia, Mark-Anthony Beckles, and Miles Simon! All these young men and women are really impressive people… not just wonderful swimmers! I’m sure that reflects the team as a whole. There is some pretty raucous video out there from this meet. And yes, DJs should be at more dual meets. Heck, they thrash the speakers at Summer Junior Nats so why the heck shouldn’t we bring the energy to the meets? #GoBison! (and go Dawgs)

Top Ten programs, take notice. If we have 40,000 plus students and low turnouts for swimming, we have work to do. Great job to these two programs for working together to create something special. Reminds me of some of the old duel meets in USC’s dungeon and SMU’s old pool.

Could be fun for a big recruiting weekend.

Yeah I hope like heck they had recruits in town for this. How could you say no to 1,200 fans for a dual meet?

Here you go. Make sure you take a peek at the last five minutes. Shows the incredible energy and sportsmanship across the board. Great event.