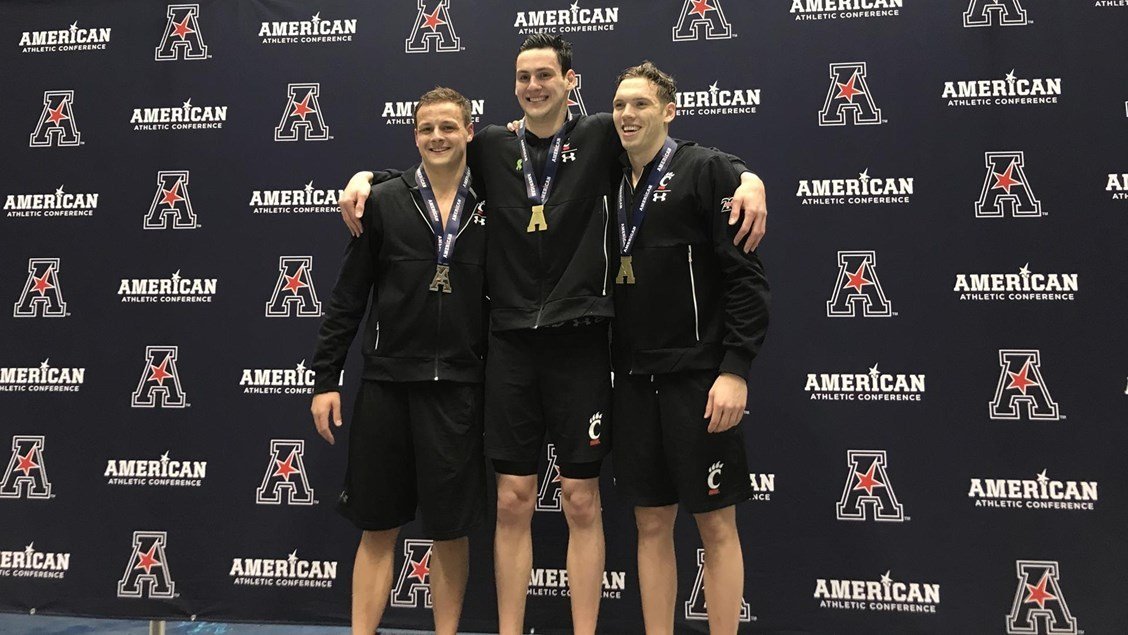 The Houston women took a sizeable lead, winning three of four events on Day 2 of the AAC Championships, while the Cincinnati men took a modest lead over East Carolina as the men’s meet threatens to come down to the wire. Current photo via Cincinnati Athletics

Houston took a sizeable lead today, winning three of four events and putting some margin between them and the rest of the AAC.Houston is in the driver’s seat eying a third straight title.

In the first individual swimming event of the meet, Zarena Brown of Houston powered home to win in 4:45.58. After a modest first 200 (1:53.28), Brown turned on the jets and pulled away from Olivia Johnson of Tulane and Ryan Dulaney of UConn. Johnson ended up second in 4:47.18, while Dulaney after leading early settled for third (4:49.05).

The 200 IM was a barn-burner: at the 150 mark all 8 swimmers were in with a chance to win as the whole field was separated by just 1.33 seconds. But in the end Laura Laderoute of Houston maintained her narrow lead to win in 1:59.20. A hard-charging Michelle Zelnic (1:59.34) was second for Tulane, as five women broke the two minute barrier that the morning had left pristine.

Then in the 50, Erin Trahan of SMU grabbed the lead on the first 25 and did not let go, winning in 22.53. Interestingly, Trahan was nearly as fast on the (flying-start) 50 fly on the relay last night (22.62). Trahan beat out Mykenzie Leehy of Houston, who was second in 22.76, in a battle of the fly vs. free fastest medley relay splits from last night.

Cincinnati took a modest lead today over East Carolina as the men’s meet threatens to come down to the wire. Cincinnati dominated the middle distance events, whilst East Carolina did the same to the sprints. UConn in third in in striking distance too if the leading teams start to falter.

Dominic Polling used a field-fastest breaststroke split (29.31) to take the lead in the 200 IM, and he went on to give Cincinnati their second win of the evening in a school record 1:45.43. Marek Osina of East Carolina was the only one able to challenge Polling late, and he won a couple tenths back on the freestyle to finish in 1:45.96, with a full 2.03 seconds back to Cooper Knapp (UConn; 1:47.99) in third.

After that, William Kearsey of UConn took the 50 freestyle title ahead of an East Carolina 2-3-4. Kearsey had the fastest seed time coming in, the fastest time this morning, and swam the fastest of all tonight, 19.78, to win. Gustavo Santos of East Carolina was the only other swimmer under 20; he swam 19.85 for a close second.

Parker Hardigre of SMU won on 1 meter by a large 35.80 point margin to sweep both boards; he scored 324.00. Luke Stivers (288.20) and Devin Nugent (281.65) took second and third for East Carolina, but the second-best score of the meet actually belongs to Hardigre’s teammate, Kathryn Crown, who scored 309.45 last night to win the women’s competition.