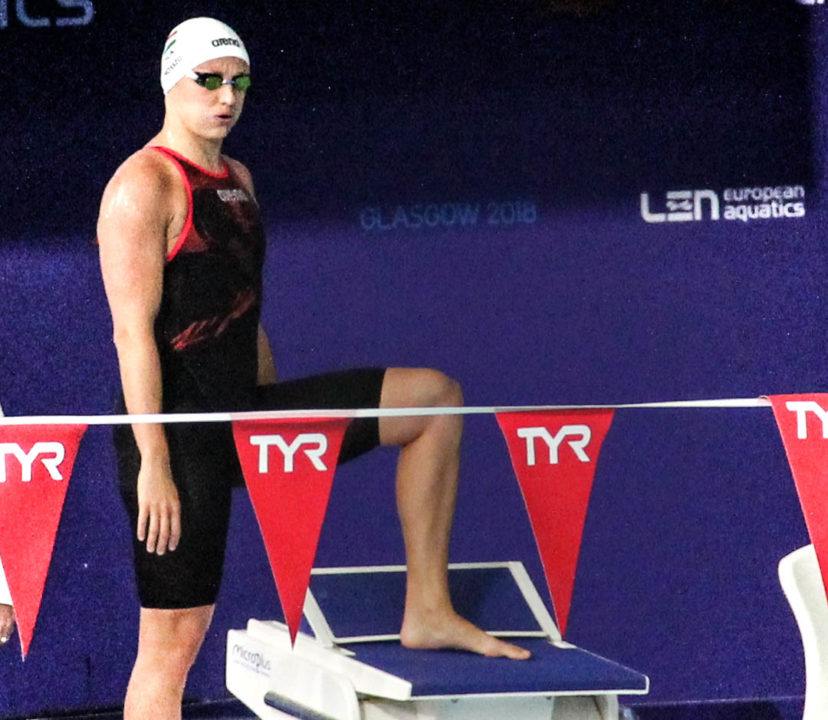 A couple of twists characterized day 2 prelims of the FINA World Cup in Beijing, including a rare miss by Hungarian Katinka Hosszu. Archive photo via Giusy Cisale swimswam.com

Host nation of China wasted no time getting out ahead of the competition on day 2 of prelims of the World Cup stop in Beijing. The newly-minted national record holder in the men’s 200m back from last night, Xu Jiayu, led the 50m back field this morning with a solid 23.46.

That time ranked ahead of America’s Michael Andrew, who touched in 23.69 for 2nd seed, while Russian speedster Vlad Morozov rounded out the top 3 in 23.86. Australia’s 200m back runner-up from last night, Mitch Larkin, is very much in the mix for tonight’s final as the 4th seed in 24.10.

In a surprising turn of events, Hungary’s Iron Lady Katinka Hosszu found herself out of the women’s 200m free final tonight after capturing two golds on night 1. Clocking a morning effort of 1:58.33, Hosszu fell to 12th place after heats, which sits her out of the top 8 for this evening’s event.

Finishing over 3 seconds faster to claim the top seed was Sweden’s Olympic champion Sarah Sjostrom. Sjostrom notched 1:54.87 to represent the only racer of the field under 1:55. Last night’s gold medalist in the 400m free, Li Bingjie of China earned runner-up status to flank Sjostrom, collecting a morning time of 1:55.39.

Dutch mainstay Femke Heemskerk will also be in tonight’s final after her 3rd-seeded 1:55.80.

Another twist on the morning came in the form of Mitch Larkin‘s DQ in the men’s 200m IM. Already having been a threat over the course of the World Cup Series thus far in this event, Larkin sits as the 2nd fastest swimmer in the world with his time of 1:52.96 from last month.

Based on the splits revealed on the results, it appears Larkin was most likely disqualified on the transition from back to breast, but we will know more details post-publishing.

In his stead, Japanese swimmer Keita Sunama got the job done to lead the field, stopping the clock in 1:56.49. Feilian Mao found himself touching the wall right behind in 1:56.85, while Yu Cong notched 1:57.22 for the 3rd seed.

Two IM powerhouses lurk in the 4th and 5th seeded spots, however, as China’s Wang Shun and Japan’s Hiromasa Fujimori earned morning swims of 1:57.27 and 1:57.53, respectively.

Is there any special reason that each report about third cluster of World Cup presented by Loretta Race has Hosszu’s name in the title and Hosszu’s picture? I know that not many fans are interested in this tournament organized by FINA and there is probably a need to attract readers’ attention with some buzzwords. But it is still the WORLD Cup but not a Hosszu’s Cup.