Hannis Becomes 4th Fastest American Ever With 30.19 50 BR In Charlotte 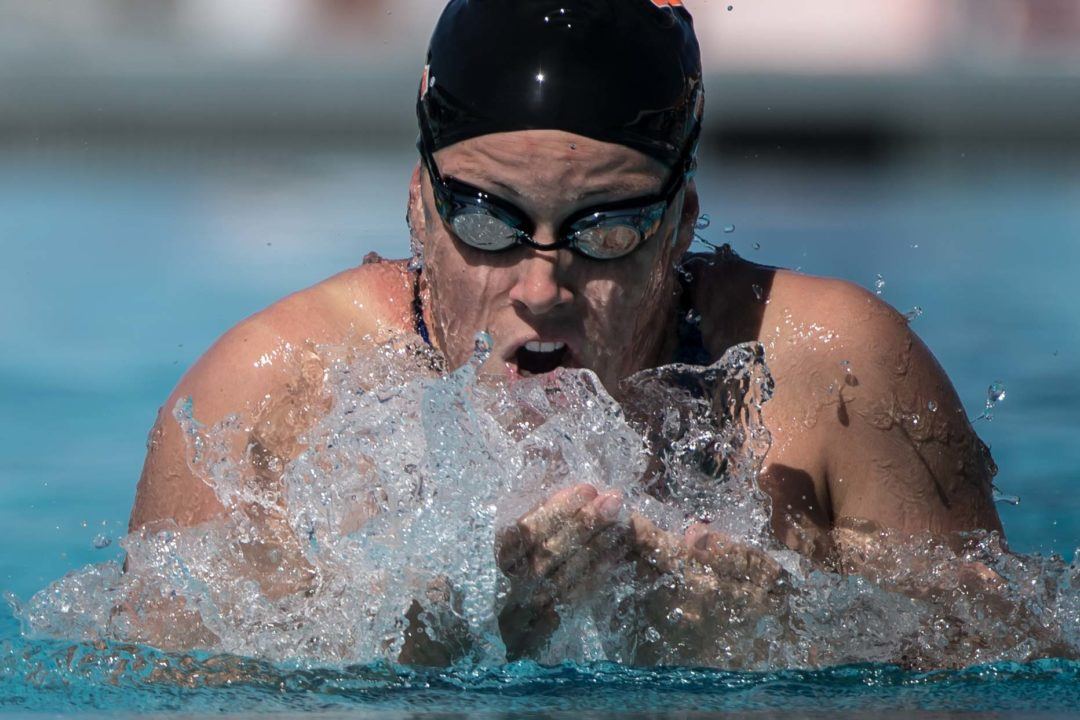 Molly Hannis became the 4th fastest American in history with a blistering 30.19 in the women's 50 breaststroke. Archive photo via Mike Lewis/Ola Vista Photography

Saturday night at the Charlotte Ultraswim featured the 4th and final round of the stroke 50s, as a shootout format saw a prelim round and a round of 16 on night 1, a round of 8 last night, and the top 4 from last night advanced to race tonight for the win. Along with the stroke 50s, finals of today’s events were contested: 200 free, 200 breast, 100 fly and 200 back.

The biggest highlight from the night came from 2016 Olympian Molly Hannis, who unleashed a 30.19 in the 50 breaststroke final. That swim not only earned her the win, it also made her the 4th fastest American of all-time in the event. She improved from 8th on the list to 5th last night, posting a best time of 30.33, and moves past Lilly King tonight for 4th.

Hannis also moves into 2nd in the world for the season, now only trailing Russia’s Yuliya Efimova (29.88). Fellow Olympian Katie Meili also had a strong showing in the 4-person final, clocking 30.70 for 2nd. Her fastest swim of the four came last night, where she went 30.45 to just miss her PB by 0.03. Meili’s 50 came not longer after she booked a decisive win in the 200 breast, clocking 2:26.81.

Another eye popping swim tonight came in the men’s 50 back, where Justin Ress unleashed a 24.89 to win decisively and crack 25 seconds for the first time. That swim moves Ress into 10th in the world for the year, and into a tie for #7 on the all-time U.S. list. This caps a fantastic meet for Ress, who also posted a PB of 53.49 in the 100 back here.

Olivia Smoliga and Courtney Caldwell had a little back and forth in the women’s sprints, with Caldwell first taking the win in the 50 back in 28.37, just ahead of Smoliga in 28.44. They were right back at it not long after in the 50 free, where Smoliga got revenge with a win in 25.19 to Caldwell’s 25.24.

Tim Phillips had two wins on the night, first taking the 100 fly in 53.14 before coming back with another win in the 50 in 23.83. Israel’s Marcus Schlesinger was the runner-up in both.

The men’s 50 free was another fast race, with Michael Chadwick throwing down a time of 22.22 for the win. That’s less than three tenths off his PB from the Olympic Trials last year, which is a good sign heading into the World Trials at the end of June. Ryan Held also had a solid swim for 2nd in 22.51, and Ress had another good showing for 3rd in 22.64.

Other Winners On Night 3:

This meet is way more exciting than the arena PSS

Molly Hannis looks stronger than ever. But unfortunately for her I think she will finish again 3rd in the 100 breast at world trials.
She deserves to make the team so I wish her to qualify in the 50 breast.

Very good times for Chadwick and Held in the 50 free. Yesterday I compared to their times of last year’s same period but I thought I talked about times of final. My bad. The final was on Saturday. And both guys have kept the best for the end. They are much faster than last year in early June. 22.22 vs 22.75 for Chadwick. 22.51 vs 22.94 for Held.