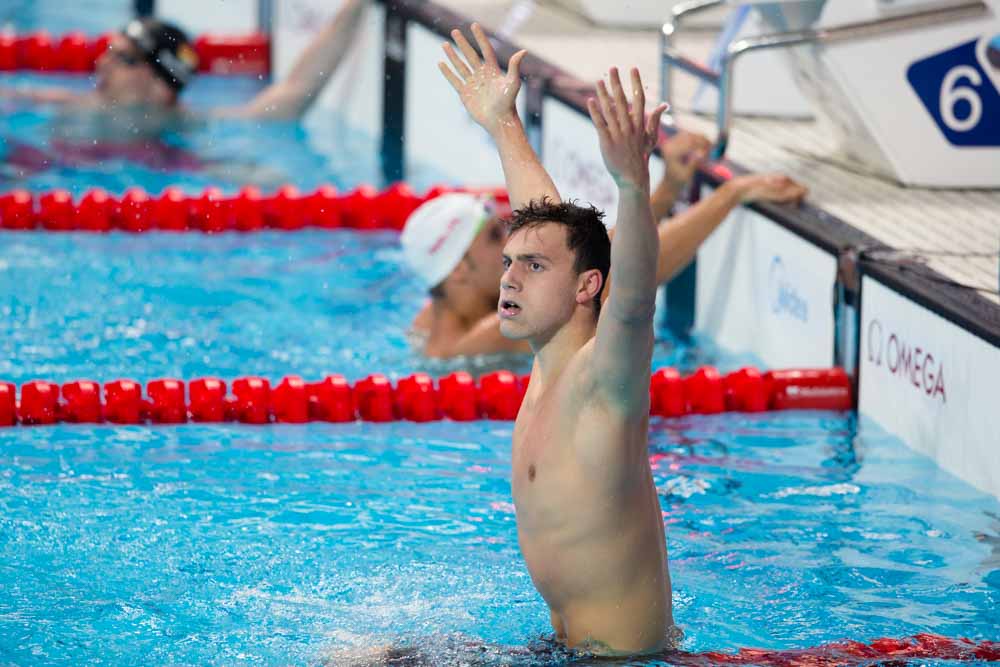 Great Britain's James Guy closed out the Japan Open with a personal best 51.50 in the men's 100 fly. Archive photo via Tim Binning/TheSwimPictures.com

It’s approaching the 9-month mark since the IOC & Tokyo Organizing Committee jointly confirmed that the 2020 Olympic Games would be moved a year out to 2021.

The third and final day of the Japan Open saw some fast results across the board, including a personal best in the men’s 100 fly from British star James Guy.

Guy has traditionally been known as more of a 200/400 freestyler, seeing as he’s the reigning 200 free world champion, but his butterfly has been coming along and is now world class. He competed in the 100m event at the Olympics last year, making the semi-finals, and has been Britain’s go-to guy on the medley relay the last two years.

This year he has taken the 200 fly more seriously as well, winning it at the British Championships in a best of 1:55.91 and then matched it year in Tokyo on day 1.

After another strong showing on day 2 in the 400 free, it was all Guy in the men’s 100 fly final, touching in a time of 51.50. That swim lowers his best time of 51.52 from the British Championships and holds him at 3rd in the world for the year. Naoki Mizunuma took 2nd, nearly nine tenths back, in 52.38.

Another highlight from day 3 was 200 breaststroke world record holder Ippei Watanabe in action in his signature event. Watanabe clocked a time of 2:07.77 to win by nearly two seconds and solidify his consistency after his wild 2:06.6 in January. Only two other men have broken 2:08 this year, so Watanabe is looking like the man to beat heading into Budapest.

On the women’s side Rikako Ikee was back in action after an impressive double on day 2, winning the 100 fly in a time of 57.65. Ikee sits 2nd in the world rankings with her 56.89 from Japanese Nationals, and this 57.6 is a solid in-season swim. Great Britain’s Alys Thomas took 2nd in 58.37.

Other swims from day 3:

OMG!! GBR is trying so hard for the gold in men’s 4x100m medley!!!!
Tom Shields or Conger will be the key for Us to beat GBR. I only see Shields can go faster than Guy about 0.5s. So if a British male Backstroker can go 52 high or 53 low, they will win because Peaty will destroy everyone with a huge margin (1.75s at least)

Well currently we have a backstroker who’s struggling to go 54 low so I think you’re fairly safe there. At the moment the improvements by Scott and Guy in the free and fly are just trying to counter how far back CWH is going.

I don’t see Adrian can outspit Scott about 1s again this year!!!! :))
So it depends on Shields. If Shields goes 50.59 again (like he did in Kazan) and takes Adrian back to the first position, Adrian can have enough clear water to take gold. If not, maybe Adrian needs a McEvoy-46.6 flat to win

Adrian’s been 46.60 before (2013 world champs, medley relay), and he seems to be in at least as good of shape right now, so that’s not really too crazy of a possibility.

Guy and Scott are faster this year but don’t you think that Dressel and the top US breakstroker at Trials could be much faster than last year ? Improvement is not reserved to Chinese or Brit swimmers…

Indeed, neither are drop offs, especially in post Olympic years. We’ve seen GB/China likely to improve a little – Which isn’t the norm the year after an Olympics. We’ll see what US muster.

Japan third in the women’s 4×200 free? Considering the swimmers selected, I don’t think that Japan will be swimming the 4×200 free in Budapest..(only Ikee and Igarashi selected among the 200 freers)

Interesting, we have opposite predictions for the men’s relays. I can’t see the U.S. losing in the men’s 4×200. Both 4×100 relays are gonna be close for the men and I wouldn’t be surprised if the U.S. didn’t win, but even though GB looks good in the 4×200 I still don’t think they’ve got enough to beat the Americans.

Idk I think we should wait until trials to really make predictions. You could pontentially add the 200br or maybe the 200 fr if the college guys really step up but well see.