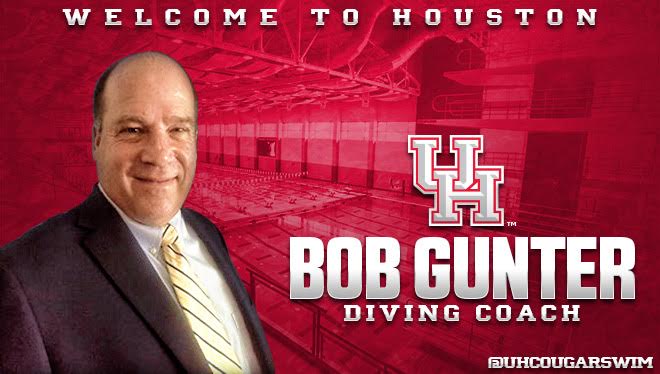 HOUSTON – University of Houston Head Swimming & Diving Coach Ryan Wochomurka is proud to announce Bob Gunter has been hired as the program’s next diving coach. One of the top diving instructors in the nation, Gunter brings an impressive background to the Cougar diving squad.

“I am thrilled to welcome Bob to the Cougar Swimming & Diving family,” Wochomurka said. “After conducting an extensive national search, we were very blessed to find one of the best and most well-respected coaches in the diving community in our own backyard.”

“I feel extremely privileged and excited to become part of a diving tradition as strong as the one at the University of Houston,” Gunter said. “I am thrilled to get to work alongside Ryan and (Assistant Swimming Coach) Hannah Burandt, and I can’t wait to begin building the next chapter of Cougar Swimming & Diving.”

Since 1999, Gunter has served on the staff at The Woodlands Diving Academy (WDA) in The Woodlands, Texas. For the past 17 years, Gunter has helped mold WDA into one of the top youth diving programs in the world.

Gunter’s athletes have achieved tremendous success on the national, international and Olympic levels. As WDA’s Head Junior Olympic Diving Coach from 2005-09, Gunter led the program to four consecutive US Diving Junior National Championships, and he was honored by the United States Olympic Committee as Diving Developmental Coach of the Year in 2007 and 2008 as well as earning US Diving Moose Moss Age Group National Coach of the Year honors three times.

In 2009, Gunter took over as the Head Senior Diving Coach at WDA. In that role, he led the program to US Diving Senior National Championships while winning Senior National Coach of Excellence honors in 2009 and 2011, and in 2010 he was recognized for a third time as the USOC Diving Developmental Coach of the Year.

Since 2012, Gunter has served as the Developmental Program Coordinator at WDA. In that role, Gunter has continued to lead administrative efforts for the program while working to strengthen the club’s developmental efforts.

Gunter has a long history of training divers to compete at the highest levels of the sport. In 2008, Gunter coached Michelle Cabassol to a spot in the US Olympic Trials. Despite being the youngest competitor in the field, Cabassol finished in the top-10 of her event.

In 2012, four of Gunter’s protégés qualified for the US Olympic Trials. One member of the Gunter’s group, Kassidy Cook, finished second at the meet in the synchronized 3-meter springboard event.

Gunter has worked for many years as a coach with the US Diving Team and has coached at competitions throughout the world, including Russia, China, Great Britain and Canada. His pupils have combined to win 33 individual national championships, and under Gunter’s mentorship Cook won a FINA Junior World Championship in 2010.

Gunter graduated from the University of Central Oklahoma with a B.S. in education. His wife, Stephanie, is the Assistant Junior Olympic Coach at WDA and they have two children, Madison and McKenzie.

“Bob’s extensive experience in developing athletes into elite level competitors at the national and international level will be invaluable as he continues to add to the storied legacy of UH Diving,” Wochomurka added. “He is a tremendous competitor, educator, mentor and family man, and I cannot wait to begin working with him as we begin a new chapter for the University of Houston Swimming & Diving program.”

Gunter joins a Houston Swimming & Diving program that is rich with tradition, including 21 Olympians. Former Cougar Yulia Pakhalina was a five-time Olympic medalist, including a Gold Medal winner in the synchronized 3-meter springboard at the 2000 Sydney Games, while fellow alumni Anastasia Pozdniakova teamed with Pakhalina to win Silver in the same event in Beijing in 2008.

Houston’s success extends to NCAA competition, including 11 individual NCAA national championships. On the diving side, Pakhalina was a five-time national champion and Pozdniakova was a two-time winner. Overall, the Cougars have captured 238 All-American honors.

WHAT THEY’RE SAYING ABOUT BOB GUNTER

“Bob and I have worked together for the past 20 years. Without his coaching and commitment, the Woodlands diving team would never have reached the level that it did. I’m very happy that Bob finally gets an opportunity lead his own program. The University of Houston has chosen the right coach for their diving team.” – Ken Armstrong – Program Director, Woodlands Diving Academy

“Bob has coached divers to success at all levels, including junior and senior USA national champions and junior world champions. More important than his great coaching resume is that Bob is a coach with tremendous integrity and a great example for his student-athletes.” – Matt Scoggin – Diving Coach, The University of Texas at Austin

“Bob is one of the most talented coaches in the United States and has been for years. It was only a matter of time before he was offered a shot at a top-level NCAA Division I program. This opportunity is long overdue, but there is no one more deserving.” – Jon Proctor – Diving Coach, Florida State University

“Bob is a great hire for the University of Houston. He is a well-respected coach throughout the diving community, and I know he will continue the tradition of great diving at Houston.” – Buck Smith – Diving Coach, Eastern Michigan University

Houston will host the American Athletic Conference Championships for the first time as the best swimmers and divers in the league visit the CRWC from Feb. 17-20, 2016. Following the conference meet, Olanski and her teammates will look to close the season at the NCAA Championships, to be held March 17-19, 2016 in Atlanta, Ga.