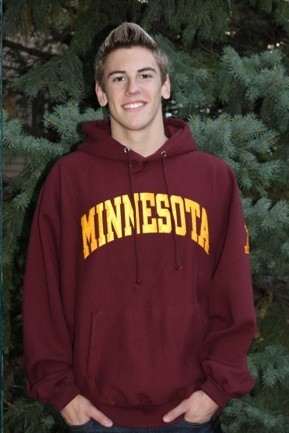 The Golden Gophers continue to mine their home turf, picking up one of the the top in-state sprint prospects in East Ridge's James Tidd.

Tidd swims for East Ridge High School out of Woodbury, Minnesota, just a short drive from the University of Minnesota campus he’ll move to next fall. He won state titles in the 50 free, 200 medley and 400 free relays last winter.

Tidd is coming off a big summer for the Southeast Metro Sharks – he went 23.57 in the long course 50 meter free, which might be his most impressive swim yet.

Toomey’s development had to be a special draw for Tidd, who, like Toomey, has made vast improvements over the course of his high school career. A quick look at his progression over the past three years:

The 100 free has been even more impressive:

This continues the trend for Minnesota of recruiting very well within their home-state borders. Already the women have picked up two of the top in-state recruits in Kaia Grobe and Chantal Nack. The men got a verbal from California distance man Michael Messner a few days ago.

The Gopher’s are doing a great recruiting job! A local sprinter for Steve Miller and a distance freestyler from a source tapped into by Kelly. Congratulations gentleman, you have joined a rising program with great coaching at a well respected academic institution.
.