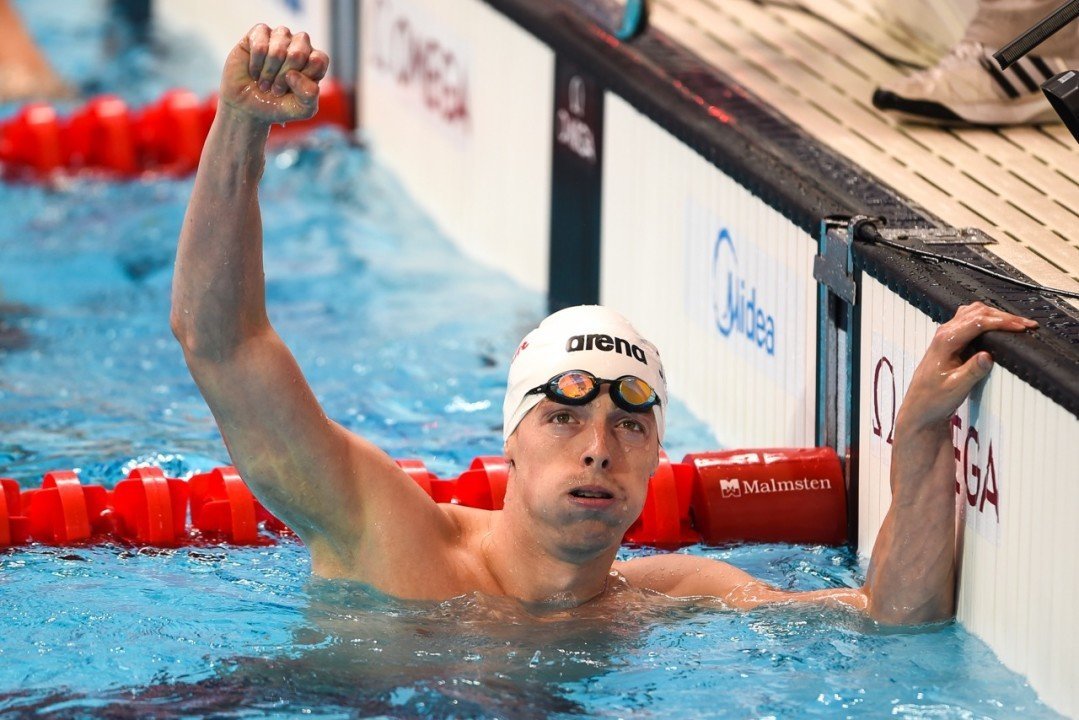 Voting for USA Swimming's Golden Goggle Awards has been open for just over a week now, and the front-runners are starting to become clear. One race that isn't so clear, though, is Male Race of the Year, where surprise leader Connor Jaeger sits above Michael Phelps, Ryan Lochte and Jordan Wilimovsky. Archive photo via Peter Sukenik/www.petersukenik.com

Voting for USA Swimming’s Golden Goggle Awards has been open for just over a week now, and the front-runners are starting to become clear. One race that isn’t so clear, though, is Male Race of the Year, where surprise leader Connor Jaeger sits above Michael Phelps, Ryan Lochte and Jordan Wilimovsky.

We put together our official SwimSwam ballot shortly after the nominees were announced last week, and at the same time tracked the early vote leaders.

(Bonus fun: Mitch and Loretta over at The Main Set, SwimSwam’s official podcast, break down our official ballot picks and make their own selections – you can listen to that, plus an interview with Breakout Performer of the Year nominee Kelsi Worrell, here.)

The number of votes cast has about doubled since then, from 1500 to 3000, and there have been some major shakeups in the standings.

You can vote for the 2015 Golden Goggle Awards here.

Here’s a quick look at the horse race as it currently stands, with last week’s numbers in parentheses. Current leaders are in bold:

There’s no option for SwimSwam.com. That was a major nomination snub.

Not much change here. Wilimovsky suffers from open water swimming’s relatively low profile compared to pool swimming, but Worrell had an amazing breakout year all-around and owns nearly half the votes so far.

Jaeger is making a bit of a run in this category, coinciding with his big run on the Male Race of the Year award. Schmitt still holds a big lead, but there’s plenty of time left for things to change.

Maybe the toughest category to call. It looked like a three-way battle between Bowman, Marsh and Gemmell, but Marsh has dropped some while Gemmell has risen.

There’s still a long ways to go, but this one looks pretty clear-cut already. Call it the Ledecky Effect – any nominee with any connection to Ledecky is winning by a landslide: Gemmell, this relay and Ledecky herself.

Ledecky’s double-world-record 1500 free continues to outpace her 800 free, which is woefully outgunned considering she only broke one lousy world record during it.

This is the surprise so far. Phelps has the obvious name recognition, and got plenty of publicity for his cross-the-world rivalry with Chad le Clos. But its World Champs silver medalist Connor Jaeger who leads the way here, albeit by only about 50 votes over Phelps’ 200 fly.

Ledecky has dropped a whole 2% in this category over the week. Will she get run down for the title??? (Spoiler alert: She won’t.)

This one has stayed pretty steady since voting opened. The surprise at this point is Wilimovsky passing up Lochte by over 100 votes, but Phelps still has nearly double the votes of anyone else in the race.

Since these awards, in some categories, appear to be essentially more of a popularity contest rather than an objective analysis of performance, I think that open water swimming, which has fewer fans, despite SwimSwam’s noble attempts to raise its profile, should have at least one award category of their own. Another reason for that is the huge gap between the longest pool event and the shortest open water distance, relative to the gaps between pool events (i.e. 400 to 1500), so that those who excel more at the longest distances (i.e. open water), only have a couple of event distances at which they can compete in, and essentially only one stroke. I believe Wilimovsky, as a world gold medalist in… Read more »

It is kinda surprising that Jaeger is leading the race of the year award in an event that he got second in, and had the WR holder drop out like 5 minutes before the race…

But I think Jaeger has really taken off in popularity in the past few years. He came up the ranks after being a mediocre IMer most his career, he helped Michigan win their first NCAA title in 18 years, he continues to show up big in international competition, and he’s a chill dude who’s all about the team. More than anything I think people want to root for Jaeger and that’s what is helping him in the polls. And I’m pretty down with that, the… Read more »

Wonder if there was any consideration of phelps for the ‘perseverance award’?
Or coughlin? She arguably was better than Franklin this year. She should at least be a nominee for something after such a great year.

Ledeckys 800 was the best race. Her prelims 1500 doesn’t make her finals performance any more exceptional.

Phelps is splitting the race of the year vote. He is “Ralph Nadering” himself!

“Innovation Award” to Ryan Lochte for his (ultimately fruitless) underwater strategy. Anytime the numbskulls at FINA rule against you, you are probably right.