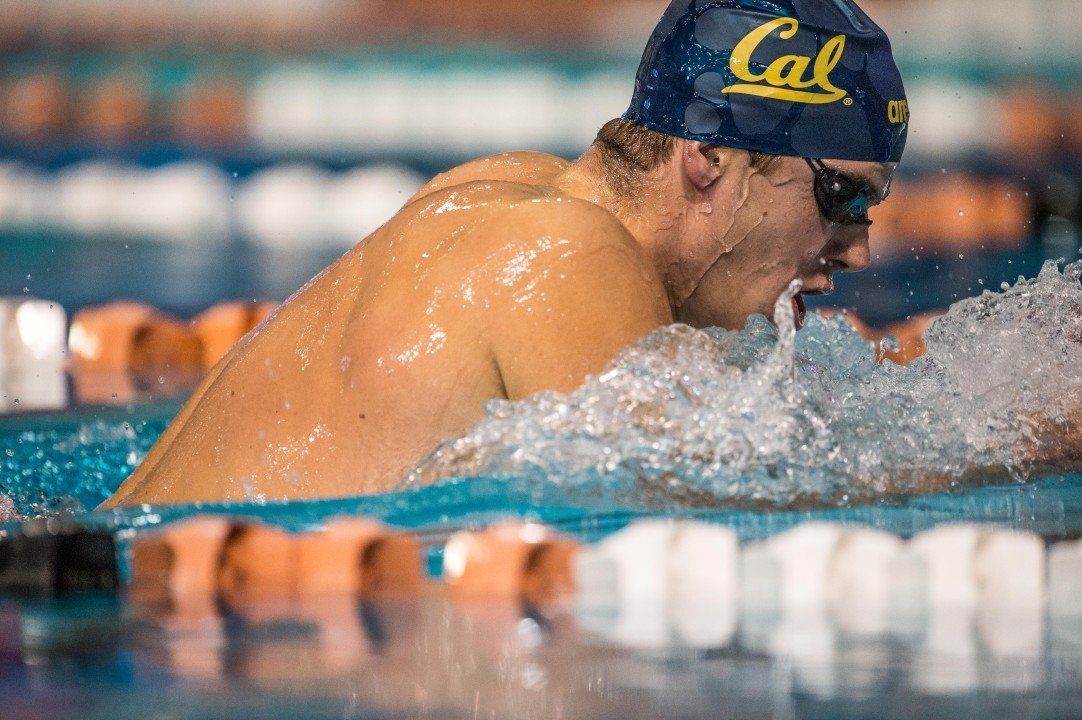 Seniors Josh Prenot and Kelly Naze both won two events in the final home meet of their college careers, as California won all 28 swimming events against the Arizona State Sun Devils this afternoon. Stock photo via Mike Lewis/Ola Vista Photography

The California Golden Bears women’s and men’s teams both romped over Bob Bowman’s Arizona State Sun Devils this afternoon in Berkeley.  While ASU did win three of four diving events, California touched first in all 28 swimming events, although the Sun Devils made it close in several races.  At the end of the day, the score stood at 181-98 in the women’s meet, and 183-107 in the men’s.

The Golden Bears began the meet with their fastest official time in the 200 medley relay yet this season, as senior Rachel Bootsma, junior Marina Garcia, junior Farida Osman, and freshman Amy Bilquist took first in 1:39.92.

Senior Kelly Naze marked the final home meet of her collegiate swimming career with victories in the first and the last individual events of the afternoon.  She won the 1000 free in 9:59.09 and then swam a 4:14.76 to touch first in the 400 IM.  Senior Rachel Acker also picked up a victory, just touching out freshman Kathleen Baker in the 200 free, 1:47.95 to 1:48.00.

California’s “A” team, although swimming as exhibition, hit the wall first in the 400 free relay to close out the meet. According to the results on the Meet Mobile app, Naze split a scorching 46.81 to anchor that relay.  If correct, that’s faster than any Cal swimmer besides Missy Franklin split in the finals of this event at last year’s NCAA championships.

The script was pretty similar for the men’s meet, as the Bears won every swimming event, although a few of the races were decided by closer margins than in the women’s meet.

Junior Ryan Murphy, sophomore Connor Hoppe, senior Josh Prenot, and sophomore Justin Lynch swam to a 1:26.98 to take the win in the 200 medley relay to open the meet.

Four different California seniors earned victory this afternoon, including a couple in “off” events for them.  Prenot got his first win of the day in the 100 back, which is not a typical event for him.  He beat out Arizona State junior Richard Bohus 48.73 to 49.11.  Prenot also won the 200 breast by five seconds in a time of 1:55.69, a week after he won the long course version of this event at the Austin Pro Series meet last week.

Lynch, normally a butterfly specialist, stuck with the sprint freestyles today.  In the 100 free, Bohus nearly again spoiled the Bears’ sweep, but Lynch got his hand on the wall first, winning 44.70 to Bohus’s 44.71.

The rest of the events went to California swimmers who were competing in their more usual events.  Junior Janadarn Burns won the 1000 free 9:21.88 in the first individual race of the afternoon.   Hoppe won the 100 breast by over a second (54.44) and junior Long Gutierrez took the 200 fly in 1:45.50, while Arizona State swimmers took 2nd in both of those events.  Freshman Nick Norman led a California sweep of the top three places in the 500 free, winning in 4:28.82.  Fellow freshman Andrew Seliskar wrapped up the individual events by securing the victory in the 400 IM with a time of 3:53.42.

Gutierrez, Lynch, Messerschmidt, and Murphy combined to win the 400 free relay in 2:56.25 to close out the meet.

0
0
Reply
Calstudent
Reply to  A

it was the senior meet. so that relay swam exhibition with 5 girls. On the last leg, naze did a 50 while some other senior did the other 50.

Messerschmidt… Seems like we’ve heard that name for about 6 years now.

And 6 years I have the feeling he’s still at the same level. 🙂
He was very promising a few years ago in the junior ranks..
I’m still waiting for his breakout swim, especially in long course.
Maybe we’ll have a good surprise at olympic trials.
Same remarks about another promising young American sprinter who has also seriously stalled, Matt Ellis.
Unfortunately absolutely no major improvement in the 100 free in long course since both swim in college.