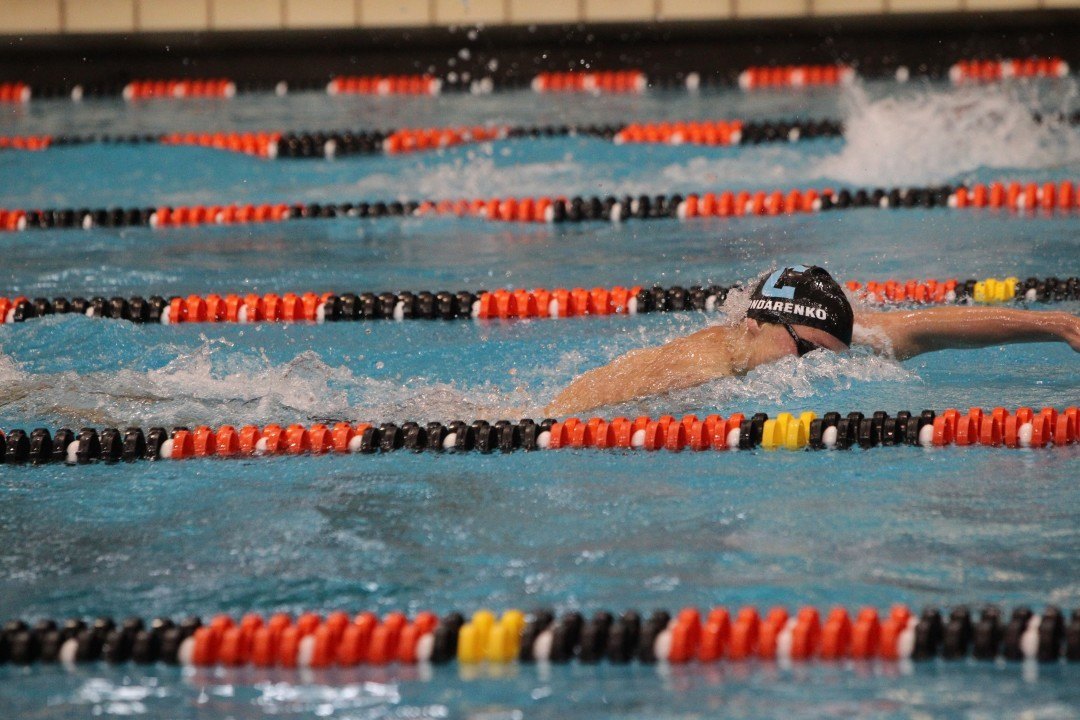 Nikita Bondarenko won the 200 free for Columbia as the men took a narrow victory over Brown. Archive photo via Noel Valero

Sorry, but you do not have permission to view this content.

Full results can be found on Meet Mobile.

The Brown Bears hosted the Columbia Lions today at the Coleman Aquatics Center, with the Lions taking the win on the men’s side and the Bears claiming the women’s meet. The Columbia men took down Brown 166-134 while Brown’s women emerged victorious with a score of 157-143. The meet marked the Brown women’s first win against Columbia in over seven years.

Ally Donahue led the way for the Bears, claiming two individual victories and a runner-up title with three in-season dual-meet best times. Donahue swept the breaststroke events, winning the 100 in 1:02.57 over Columbia’s Jennifer Shahar and taking the 200 in 2:19.89 over her teammate Katie Roach. Columbia’s Aileen Lee placed third in both breaststroke disciplines.

Despite posting a 34-second breaststroke split, Donahue was unable to run down Columbia’s Jessica Antiles in the 200 IM. Antiles led by nearly two and a half seconds at the 100 and managed to use her front-end speed to hold off Donahue, 2:05.27 to 2:05.80. Antiles also took the title in the 500 free over Brown’s Korby Simpson. The pair touched in 5:04.75 and 5:05.49 to touch out Columbia’s Maureen Rakovec.

The 100 back saw three women crack the minute mark, led by Brown’s Jenna Zagoren in 59.09. Zagoren’s dual-meet best time was followed by the Columbia pair of Kate O’Rourke (59.73) and Lynley Matthews (59.78). The 200 distance was dominated by Columbia’s Mary Ashby who won the event by over four seconds. The freshman posted a lifetime in-season best of 2:02.79 to take down Brown’s Jackie Karpowicz and fellow Lion Kelsey Ables.

Ashby earned herself a much more narrow victory in the 200 free, touching out Brown’s Sarah Cronin 1:50.62 to 1:50.97. The duo finished well ahead of Korby Simpson, who threw down a time of 1:53.27 for bronze. The Columbia pair of Nicole Papsco and Kelsey Ables finished one-two in the 1000 free ahead of Brown’s Elly Vitek. Papsco’s winning time of 10:26.15 marks her third fastest swim ever and her first ever dual meet win in the event.

Brown senior Reia Tong earned the sprint queen title by sweeping the 50 and 100 freestyles. Tong’s time of 23.33 was enough to comfortable take down her teammates Aja Grande and Maddie Salesky. Tong’s time put her within thirteen hundredths of her seventh-place swim at the 2015 Ivy League Championships. Tong also cracked the 51 second mark in the 100 for the second time ever at a dual meet, posting a 50.85 to win over Salesky and Grande by a full second.

The 200 fly granted Columbia yet another narrow victory through Kristine Ng, whose 2:04.32 took down Brown’s Gina Matsumoto (2:04.56). The Lions also claimed the 100 fly, with Christina Ray breaking 56 seconds for the fourth time this season to touch in 55.64. Brown’s Caroline Vexler and Emma Wittmer followed closely in tow to claim the minor medals.

The 200 medley relay kicked the meet off with a bang as the two teams finished within two tenths of each other. Despite trailing at the 150 mark, the Bears took the event after Tong ran down O’Rourke on the final leg. Brown also won the 400 free relay ahead of their B team, touching 3:26.18 to 3:29.67. Brooke Bernardin of Columbia emerged victorious in the one-meter diving event while Brown’s Rachel Speakman claimed the three-meter.

Columbia’s Brian Tsau kicked off the men’s individual events by running away with the 1000 free. Tsau’s final time of 9:23.32 edged Brown’s Grant Casey by nearly five full seconds. Tsau scored Columbia a victory in the 500 free as well, touching in 4:32.32. Tsau finished four and a half seconds ahead of Brown senior Cory Mayfield. Mayfield and Casey claimed the minor medals in 4:36.80 and 4:37.44.

Jae Park led the way for the Lions, winning three individual events en route to the team’s victory. Park swept the breaststrokes in 56.40 and 2:02.73 in two great races against Brown’s Connor Lohman. Lohman narrowly settled for the runner-up spots, finishing in 56.70 and 2:03.03. Park closed off the individual races with his third win in the 200 IM, shooting past Springman on the breaststroke leg to take the title in 1:51.63.

The 200 free showcased a tight battle between Lion teammates Nikita Bondarenko and Michal Zyla. Bondarenko turned .05 seconds ahead at the halfway mark while Zyla cut a single hundredth off the gap on the back half. The final times for the pair were 1:40.95 and 1:40.99. Zyla went on to win the 200 backstroke over Brown’s Nicholas Brown. Zyla split sub-55 on both 100s to take the victory in 1:49.30 to Brown’s 1:52.11.

Columbia also touched first in the shorter backstroke distance thanks to Omar Arafa, who touched out Brown’s William Lee 50.61 to 50.93. Riley Springman scored one of Brown’s two individual victories in the 200 fly, winning easily in 1:48.24 to Shane Brett‘s 1:51.40.

The Bears’ other victory came in the 50 free with Jack Nee hitting the wall first in a lifetime dual meet best of 20.66. Nee competed in the C final of the Ivy League Championships last year, where he only swam a tenth faster than his time from today. Columbia’s Kevin Frifeldt also managed to crack the 21 second mark in 20.88.

Columbia won the 200 medley relay to kick off the meet, but not without a fight: The Lions’ time of 1:32.36 touched mere hundredths over Brown’s A team (1:32.51). Despite being unable to close the point gap, Brown still capped off the meet with a win in the 400 free relay by nearly two full seconds. Jayden Pantel, in usual fashion, swept the diving events over Brown’s Jonathan Schlafer.

Can’t wait to see the showdown in the 200 fly between Corey Okubo and Riley Springman!