GLVC Postpones Most Fall Sports, Will Compete in Spring 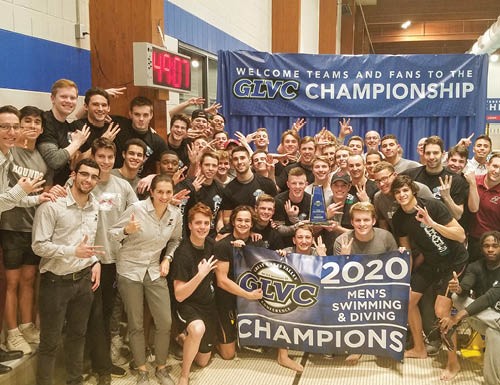 The Division II Administrative Committee will allow athletes to obtain an eligibility waiver if they play less than 50% of their season due to coronavirus.

The Great Lakes Valley Conference, one of the top swimming conferences in Division II of the NCAA, has announced that they will be postponing most fall-season sports until the spring. Specifically, football, men’s and women’s soccer, and women’s volleyball will have regular-season competition and GLVC Championships conducted in the 2nd semester, while cross country will still be allowed to compete in the fall.

While many conferences have announced disruption and postponement to their fall semesters of collegiate athletics, most have taken a ‘wait-and-see’ approach to officially rescheduling athletes for the spring.

In making this announcement they became the 11th of 23 NCAA Division II conferences to postpone fall athletics.

“Regrettably, we find ourselves having to make these difficult decisions in July similar to those made in mid-March, regarding the postponement of GLVC competition for football, soccer, and volleyball for the fall semester. We remain optimistic that we can provide our student-athletes impacted by today’s news with meaningful opportunities to engage with their teammates and coaches throughout the fall semester to prepare for the planned return to competition in the spring. The GLVC and all 15 of our member institutions remain committed to prioritizing the health and welfare for all students, faculty, and staff, as well as, for the citizens that reside in the community that supports each school.”

The biggest impact this announcement will have on athletics is on football programs. Last season both Lindenwood University and the Univesity of Indianapolis’ football teams were selected for the NCAA Division II Football Playoffs. This was the first time that two teams from the GLVC were selected to compete in the tournament in the same season. Joining them in post-season competition was Truman State University, who won the inaugural America’s Crossroads Bowl over Ohio Dominican University.

This announcement will also affect men’s and women’s soccer, as well as volleyball. Cross-Country, while a fall sport, will still be permitted to compete. Both tennis and golf, who compete in both fall and winter, will be allowed to compete during the fall portion of their season.

For swimming, along with fellow winter sports bowling and indoor track, the season remains unaffected as of now. The conference set a deadline of October 1st for deciding a start date for both men’s and women’s basketball and wrestling.

The 2020 GLVC Swimming and Diving Championships was won by the University of Indianapolis on the men’s side, while Drury took home the title for the women. Combined, 20 conference records were broken between the men and women. The conference qualified 111 athletes for the NCAA Division II Swimming and Diving National Championships, which was canceled halfway through due to COVID-19.  Going into the meet, 10 men’s events and 5 women’s events were led nationally by GLVC athletes.

The Drury men have won 12 NCAA Division II team championships, with their most recent coming in 2014. The Drury women have won 10 Division II titles, more than any other school in the country. Their latest title also came in 2014.

The GLVC said that dates and locations for all conference championships would be announced at some point in the future.