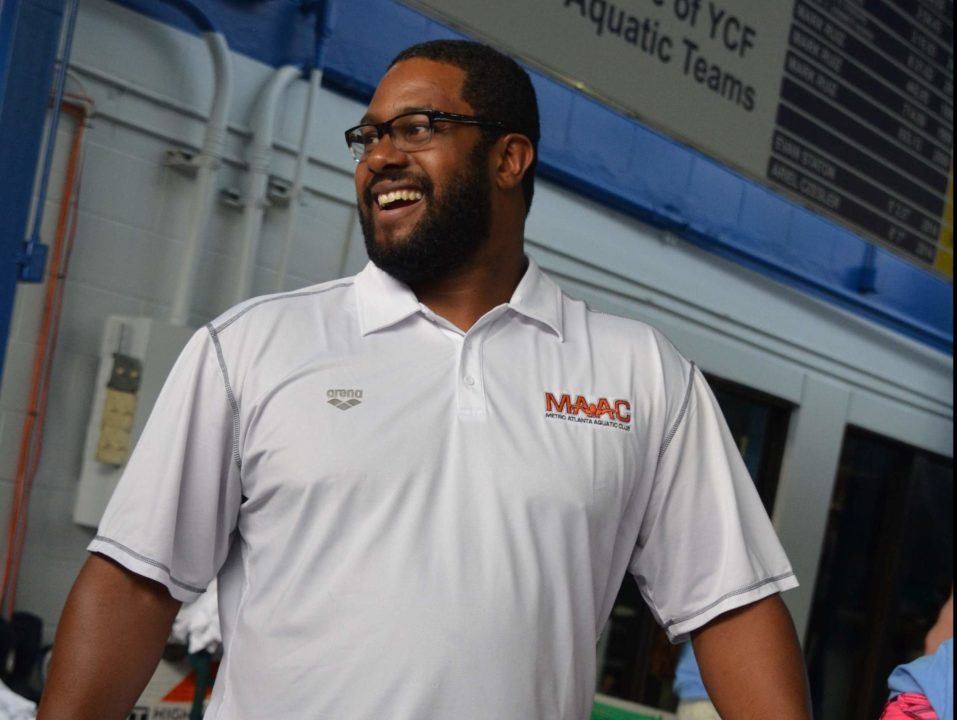 With just 5 days to go until the Georgia Tech swimming & diving programs open their 2018-2019 season on Saturday... Archive photo via Georgia Tech Athletics

With just 5 days to go until the Georgia Tech swimming & diving programs open their 2018-2019 season on Saturday against Pitt, head coach Courtney Shealy Hart has announced the addition of Michael Norment to the coaching staff. Norment fills the spot vacated by Andy Robins, who was named the new head coach at Division II Florida Southern in August.

Norment was an 8-time CSCAA All-American as an undergraduate at Georgia, including winning the 1994 SEC title in the 100 yard breaststroke. After graduation, he swam at both the 1997 and 1999 Pan-Pacific Championships. He finished 5th in the 100 breaststroke in 1999 after qualifying 3rd through to the final.

Hart and Norment were teammates on the 1992 US Junior National Team.

Since his swimming career ended, he’s spent more than a decade as a USA Swimming coach, including found the Metro Atlantic Aquatic Club (MAAC) in 2013. There he counts among his assistants a number of recent well-known college swimmers, including Natalie Hinds (Florida), Max Mitchell (Florida State), Kimberlee John-Williams (Georgia), and Annie Zhu (Georgia). As the senior head coach of that club, he broduced 5 Georgia High School State Champions and 6 Jr. National Qualifiers.

“We’re extremely excited to have Michael join us at Georgia Tech,” Shealy Hart said. “To be able to add an eight-time NCAA All-American swimmer to our staff, who also has experience professionally and nationally is a great gift. Michael possesses a wealth of experience. His success with the MAAC club team to go along with his ability to develop swimmers will be great additions to our staff. We’re fortunate to have him with us.”

“I am honored to become part of the Georgia Tech Family,” Norment said. “I’m truly thankful for the opportunity that head coach Courtney Shealy Hart has provided. We have an incredibly talented coaching staff that I’m excited to work with. The team has been enthusiastic and extremely supportive. There’s a great energy here amongst the swimmers, coaches, and entire athletics staff. Atlanta is a diverse, growing and prosperous city and Georgia Tech is well-positioned to help our students capitalize on the opportunities afforded to them.”

Norment continued, “We have a tremendous opportunity to attract athletes from a vast in-state talent pool, and will have the ability to draw on the national and international talent base as well. I’m looking forward to helping this team become a dominant force in the ACC, at the NCAA Championship level and in international competition.”

Congrats Michael you were a pretty fair breastroker back in the day!

What does this mean for MAAC?

It means that they will be looking for a new head coach.

She did. But she coaches at MAAC, along with those other individuals listed there.

Oh look at me and who I hired! It’s just weird.

No she doesn’t, Mitchell is the only coach listed still there I think…

What is a CSCAA All-American? How is that different than a NCAA All-American, which Norment definitely was. Also can’t believe the article overlooks that he was the club coach of Dean Farris!

“Officially”, there is no such thing as an “NCAA All-American” in Swimming & Diving….or any other NCAA sport, for that matter.

The NCAA does not award, or bestow, “All-American” awards in any sport. These are generally handed out by the Sports Information agencies for each sport and/or institution(s) and/or the Sport’s Coaching Association, which in Swimming & Diving’s case is the College Swimming Coaches Association of America (CSCAA).

the goat dean farris? they need to put him in the article

He actually coached him. Not sure if the post was meant to be funny or just pointing out Coach Mike developed one of the fastest swimmers in the country.